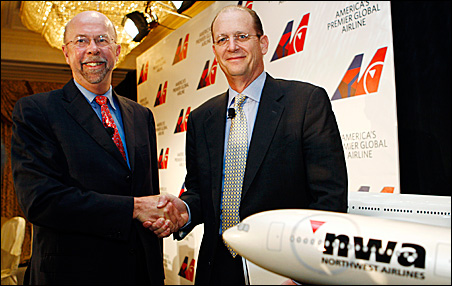 With their proposed merger, Delta and Northwest are betting that a bigger, combined airline will be better fit to survive the turbulent times facing the airlines industry these days. It’s the same assumption behind most corporate mergers: a larger company equals a stronger company.

It’s a risky assumption to make, however. The experts who study mergers say they usually fail outright or fall short of delivering the benefits promised on their announcement. At least half of the time they wind up hurting shareholder value.

The reason mergers often disappoint is that companies have unrealistic expectations about the benefits, and meanwhile they underestimate the challenge of integrating two companies — a difficult task that can cause companies to lose employees, customers and their focus.

Delta and Northwest executives are aware there’s potential for a bumpy several months ahead. A recent securities and exchange filing by Northwest Airlines outlines the merger risks. It says:

• Current and prospective employees could experience uncertainty about their future with the company, and that uncertainty might impair the company’s ability to retain, recruit or motivate key personnel.

• Completing the merger will take up a significant amount of time and attention from management, and that diversion might draw people’s focus away from the day-to-day running of the company, which could affect business relationships.

• Integrating the two companies might take a long time, and even if it’s completed successfully, “there can be no assurance that this integration will result in the realization of the full benefits of synergies, cost savings, innovation and operational efficiencies that we currently expect.”

Key challenges
They’re challenges that face any corporate merger, and the difference between failure and success often comes down to good planning and solid communication, according to those who have been through the process before.

The Hay Group, a global consulting firm, evaluates mergers by studying companies’ performance and comparing it to the market, competitors and claims made before the merger. More often than not mergers don’t deliver the desired goals, its research has concluded.

“One of the things you can take away from this is that combining two large organizations is a phenomenally difficult task, and those going into it for the first time typically underestimate it,” said George McCormick, U.S. director for mergers and acquisitions at the Hay Group.

(McCormick’s bias: His company is the one you call to come in and make sure your merger goes smoothly.)

He said he sees companies struggle through mergers because executives get so consumed with the negotiations and finances that they neglect to properly plan how they will organize, motivate and take care of employees, many of whom will play a key role in determining the success of a merger.

“Very often they’re asked to cooperate with people who have been competitors until the day before,” McCormick said. Meanwhile, there are times when “everybody knows that despite all the talk and promises, at some point the music will stop and it turns out to be a game of musical chairs.”

There’s a high risk of attrition, and when employees are laid off or leave on their own to competitors, they take with them ideas and customers.

Reaching out to employees
Jon Campbell, CEO for Wells Fargo Minnesota, knows these issues first hand. Previously with Norwest Bank, he oversaw the post-merger integration of the banks in the late 1990s. He did the same for several smaller acquisitions by Norwest.

“One of the things we learned very early on in our deal making was that if you lay all the good people off, you don’t have much left. The other thing that happens when you lay a lot of people off, customers don’t stay around.”

Campbell said he thinks part of the success of the Norwest-Wells Fargo merger was an aggressive employee outreach program called Retain and Retrain. During the merger, it sought to assure employees that it wanted to keep as many with the company as it could, and it backed it up with training programs.

“When people believe that there’s probably going to be a job for them there, change is still really difficult, but the anxiety is clearly reduced,” Campbell said.

It took lots of planning and communicating to successfully integrate the two banks, Campbell said.

Even after a merger has been completed, there are plenty of hurdles to hang up a merger’s success. One thing that’s often overlooked is the complexity factor, said Myles Shaver, a Carlson School of Management professor who specializes in mergers and acquisitions.

“The idea is that if you take your company and make it twice as big, it’s probably going to be more than twice as hard to manage,” Shaver said. “The level of complexity increases more than linearly.”

So sometimes managers find themselves working a lot harder than they did before the merger. Sometimes being a larger company means decisions take longer, making a company less nimble than it was previously.

The stock factor
Shaver said it’s increasingly well-known among business executives that the average merger fails to improve the company. In about two out of five mergers, the two companies’ combined stock drops in value after news of a merger, he said.

“At the same time, when most people go into them, they say this is not going to be an average one,” Shaver said.

It’s important to remember, too, Campbell said, that shareholder value isn’t the only measure of a successful merger.

“We have to be successful with team members, customers, communities and investors. We have to work every day to balance those relationships because anytime that equilibrium gets out of whack, we aren’t going to like the outcome,” Campbell said. “I know shareholder value is important, but you do have to look at those other metrics as well.”

Dan Haugen writes about airlines, medical technology and general business topics. He can be reached at dan [at] danhaugen [dot] com.

Anxiety in Eagan: What happens when NWA moves?
By Kevin Featherly
Wednesday, April 16, 2008
If the proposed merger of Delta and Northwest airlines is approved, Northwest is expected to close its headquarters in Eagan. Northwest’s multi-facility headquarters includes its executive suites, its analytics and pricing operations, and its training facilities, which all together employ some 2,500 workers. Eagan officials worry what the loss of the headquarters — and accompanying jobs — will mean to the city and the surrounding area.

What it means for you, our economy and the airlines
By Dan Haugen
Tuesday, April 15, 2008
The boards of Delta and Northwest have agreed to join forces to become the world’s largest airline. The new carrier will be called Delta and headquartered in Atlanta. What does the pending merger mean to passengers, the airlines’ employees, shareholders, Minneapolis-St. Paul International Airport and the local economy? National and local airline analysts offer answers.

Former Northwest CEO leading the way in Delta deal
By Dave Beal
Wednesday, Feb. 27, 2008
Richard H. Anderson is on course to become chief executive officer at a merged Northwest Airlines and Delta Airlines. It’s a plan that would to combine the two companies into the world’s largest air passenger carrier. Anderson, a familiar face in the Twin Cities and a longtime advocate of airline consolidation, is widely believed to be playing the lead role now in shaping the deal.

Oberstar: NWA merger would hurt travelers and Minnesota
By Adam Graham-Silverman
Tuesday, Feb. 12, 2008
With a merger of Delta Air Lines and Eagan-based Northwest Airlines looming, Rep. Jim Minnesota Oberstar — the top Democrat on the House Transportation and Infrastructure Committee — spoke to MinnPost about his opposition to such a deal and what he can and can’t do to block it.