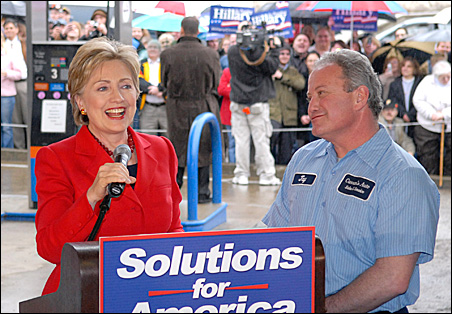 The summer gas-tax holiday proposed by two of the three presidential candidates sounds like a great idea until you consider the wider implications.

The American petroleum consumer resembles the fat man who should have gone on a diet years ago and now, quite suddenly, is presented with the opportunity for another junk food binge. In the days since John McCain and Hillary Clinton floated the idea, few serious analysts have embraced it.

To entice more driving, more carbon emissions and more dependence on foreign supplies is hardly in the national interest. Policy aside, a brief respite from the 18.4-cents-per-gallon federal tax probably wouldn’t lower the price at the pump anyway. Those are, at least, the dominant views.

McCain and Clinton are more interested in pandering to voters than pursuing a rational policy, a New York Times editorial suggested. “The proposal may draw applause and votes from Americans feeling the pain of nearly $4-a-gallon gasoline. But it is an expensive and environmentally unsound policy that would do nothing to help American drivers.”

Because, as Leonard Burman, director of the nonpartisan Tax Policy Center, explained on PBS, refineries in summer are already running at full capacity. They can’t make more gasoline than they’re already making, and the market can’t respond fast enough to supply more imports. Even if prices declined initially, they would shoot back up as driving increased and stations began to run short.

Several critics noted that McCain’s version would blow a $10 billion hole in the budget. Others observed that the struggling Highway Trust Fund, the main source for road repairs, would be further depleted. Gas taxes need to rise, not decline, in order to repair the nation’s badly deteriorating infrastructure, or so goes the argument.

Clinton’s version would require oil companies to replenish the fund. Still, the impact on the environment and foreign policy would go against American goals, as Tom Friedman pointed out in column entitled “Dumb as we wanna be.”

“This is not an energy policy,” he said. “This is money laundering: we borrow money from China and ship it to Saudi Arabia and take a little cut for ourselves as it goes through out gas tanks. What a way to build our country.

“When the summer is over, we will have increased our debt to China, increased our transfer of wealth to Saudi Arabia and increased our contribution to global warming for our kids to inherit.

“No, no, no, we’ll just get the money by taxing Big Oil, says Clinton. Even if you could do that, what a terrible way to spend precious tax dollars — burning it up on the way to the beach rather than on innovation?

“The McCain-Clinton gas holiday proposal is a perfect example of what energy expert Peter Schwartz of Global Business Network describes as the true American energy policy today: ‘Maximize demand, minimize supply and buy the rest from the people who hate us the most.’ ”

‘Slam dunk’ idea
Investor’s Business Daily was one of the few sources to embrace the idea, calling it a “slam dunk.” The treasury might lose $10 billion, but the money would go into the pockets of consumers who need it most, the paper said. “If Congress needs the $10 billion, let it cut pork-barrel spending.”

The conservative outlet Reason.com wondered: If McCain and Clinton are still senators, why don’t they introduce legislation on the gas tax holiday rather than just make speeches?

The Atlantic’s James Fallows christened it “destructive nuttiness,” and wondered if the proposal weren’t “the stupidest moment in policy ever?”

“The dumbest thing I’ve heard in an awful long time,” concluded New York Mayor Michael Bloomberg. “We’re trying to discourage people from driving and we’re trying to end our energy dependence … and we’re trying to have more money to build infrastructure,” he said in a speech. “The 30 bucks [of savings] is not going to change anybody’s lifestyle. The billions of dollars that we would otherwise have in tax revenues can make a big difference as to what kind of world we leave our children.”

Liberal writer Ezra Klein of the American Prospect challenged the media to make more of the issue: “Policy is hard. Lots of people come to different conclusions. Unanimity is rare. Except on this gas tax holiday. Just about no one thinks it a good idea. Conservative economists loathe it, liberal economists loathe it, energy experts loathe it … it’s shameless pandering of the worst sort. So is the media going to create a scandal around McCain’s pander? Around Clinton’s copy-pander? Will they hound them at press conferences, run segments about the derailed ‘Straight Talk Express,’ bring on pollsters to ask whether Americans are tired of being lied to? Well, not quite.”