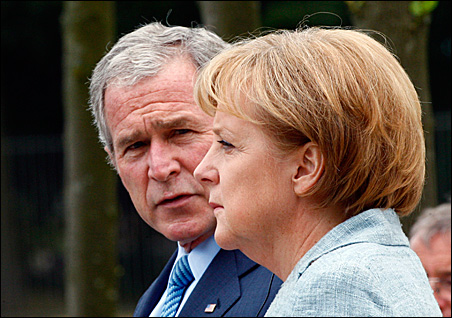 As President Bush looks forward to a meeting with Pope Benedict XVI in Rome on Friday, the protesters’ greeting he received as he arrived in Rome on Wednesday emphasized what a German newspaper today termed the “unfriendly background music” that has accompanied him on his final European tour as president.

A Spiegel Online piece titled “The punching bag’s farewell” gave a wrap-up. ” ‘Unfriendly background music’ is the phrase used by the respected conservative daily Frankfurter Allgemeine Zeitung to describe the raft of highly critical comments and reporting on George W. Bush’s final visit to Europe as an American president. The paper was reacting to comments such as ‘memory of Bush will darken America’s image in the world for years to come,’ as the country’s other leading daily, the Süddeutsche Zeitung put it. There was even Bush-bashing from within the ranks of Chancellor Angela Merkel’s own Christian Democratic Union (CDU) party, whose foreign policy spokesman, Eckart von Klaeden, remarked: ‘I won’t miss George W. Bush.’ …

“Noting that Bush was staying at Meseberg Palace in the countryside far from populous Berlin, the head of the market liberal Free Democratic Party (FDP), Guido Westerwelle, said ‘anyone who is entrenched and barricaded, isn’t visiting a country, but rather avoiding any contact with it. Other than a few photo ops, this visit is meaningless.’ “

And while the president’s trip has made news, largely for remarks about his rhetoric during the run-up to the Iraq war and for renewed threats toward Iran, coverage of the tour clearly treats it as ceremonial — and the president as largely irrelevant at this point.

Stirring up apathy?
“It’s a bruising schedule: six stopovers and countless leaders in the space of a week.” wrote Peter Walker wrote in a Guardian of London blog piece titled “Bush stirs up apathy around EU.” “But does anyone really care what George Bush gets up to on his whirlwind farewell tour of Europe? … The problem here is Bush himself, who, even by the usual lame duck standards of term-end presidents, is hobbling somewhat pathetically out of the limelight.”

Still, as London’s Times Online reported after Bush’s meeting and news conference with Merkel, “President Bush issued a swift reminder yesterday that he was still willing, if necessary, to use America’s military might against Iran, as he sought to prod a reluctant German Chancellor into supporting tougher sanctions and severing economic ties with the Islamic Republic. … Mrs Merkel delighted the White House by backing possible EU action, as well as promising to order German banks to disentangle themselves from Tehran. ‘If Iran does not meet its commitments further sanctions will have to follow,’ she said.”

The report continued: “She added that any such measures would be most effective if they were agreed by the UN Security Council. Diplomats see this last comment as code for delay.”

At a press conference with Merkel, the Times reported, “Mr Bush twice stated that ‘all options are on the table’ in punishing Iran’s defiance over its nuclear ambitions — ‘and the choice is theirs to make.’ ”

Regret for rhetoric
The paper pointed out that “His warning came less than 24 hours after publication of an interview with the Times in which he expressed regret for using language that convinced much of the world he was ‘really anxious for war’ in Iraq and Afghanistan.”

That was referring to an earlier interview on Air Force One over the Atlantic in which Bush defended the Iraq war.

“But the swagger, the rejection of criticism as invalid is gone,” the Times reported of the president’s tone, “and he acknowledges that the diplomacy should have been handled better. ‘Look, I think that in retrospect, you know, I could have used a different tone, a different rhetoric….’ ”

As the president moves from Italy to Paris on Friday and then to London and Belfast, he may or may not encounter protests as large as Rome’s, but it’s probably safe to say that he will continue to be dogged by critiques such as this,  from Handelsblatt, a German business daily:

“Bush junior wasn’t up to the challenge following the attacks of September 11, 2001 because he let himself be pushed into an unwarranted war by listening to the wrong advisers, and thereby prevented a broad front against terrorism. Constructive Middle East policy was made more difficult, and the regime in Iran was strengthened. Bush didn’t just boycott the Kyoto Protocol, he persistently undermined it — and thereby helped polluters such as China. With this unilateralism Bush damaged America’s reputation.”

Such is Bush’s legacy — at least for now.

Talk of war with Iran on a sweet spring evening
Sharon Schmickle
Thursday, May 29, 2008

Why does the U.S. overthrow regimes in other countries?
By Eric Black
Tuesday, May 6, 2008

Bush’s Mideast trip expected to be long on pageantry, short on substance
By Doug Stone
Wednesday, May 14, 2008

Bush’s speech on 6/9/08 before departing for Europe