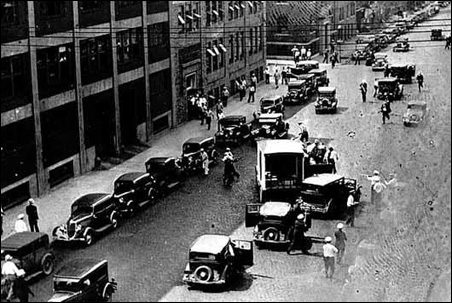 Meridel LeSeur was there on that steamy July afternoon in 1934 as the funeral cortege moved slowly through downtown Minneapolis. “We passed through six blocks of tenements, through a sea of grim faces, and there was not a sound. There was a curious shuffle of thousands of feet, without drum or bugle, in ominous silence, not heavy as the military, but very light, exactly with the heart beat,” LeSeur recalled.

The noted author and social activist was part of a crowd of 100,000 that had turned out for the funeral of Henry Ness. A week earlier, on July 20, the union loyalist had been shot and fatally wounded by the Minneapolis police during a violent confrontation with striking truck drivers in the city’s market district. Bloody Friday, as it came to be known, was the climax of a bitter strike that had convulsed Minneapolis throughout the summer of 1934, at the height of the Great Depression.

The strike, one of the bitterest in Minneapolis’ history, had pitted the militant Teamsters Local 574 against a group of employers backed by the powerful anti-union Citizens Alliance. For decades, the Alliance had maintained a tight grip on the city’s economy and thwarted union organizing efforts.

Led by the charismatic Vince Dunne, Local 574 had challenged the employers group by organizing a strike against a group of produce firms in the city’s market district. What started as a labor action against 11 relatively small wholesale distributors soon escalated into a major confrontation between the Teamsters and the city’s business establishment. Working behind the scenes, the Citizens Alliance soon recognized the union’s potential to upset the economic status quo in Minneapolis.

An ally at the Capitol
With the backing of Minneapolis Mayor A.G. “Buzz” Bainbridge and his police chief, Michael Johannes, the League was determined to break the strike. While the union faced staunch foes in City Hall, it had an ally, albeit a tentative one, at the State Capitol in St. Paul. Minnesota Gov. Floyd Olson, as a Farmer-Laborite, was sympathetic to the union cause, but he had to balance his labor sympathies with his gubernatorial responsibilities to maintain law and order.

Throughout the summer, Olson pressured the employers to accept a settlement proposed by federal mediators. In May, after an earlier confrontation between the union and employers, it appeared that the mediators had obtained acquiescence from the employers for some modest demands put forward by Local 574. But the agreement soon unraveled and the union called for a new strike to take effect on July 11.

As sporadic violence broke out around the city between union picketers and strike-breaking truck drivers, Olson declared martial law and called out the National Guard to maintain order in the streets of Minneapolis. But the strike remained in effect and tensions continued to build as the month wore on.

On July 20, police cordoned off an area around the Slocum Bergren Co. in the warehouse district. That afternoon, a produce truck driven by scabs began moving out of the district accompanied by fleet of squad cars carrying police armed with shot guns.

Just as it was turning onto Third Street, another truck filled with striking union members cut in ahead of the strike breaker’s vehicle. Police rushed onto the scene and opened fire on the unarmed pickets. More than 60 picketers were wounded during the police attack. Two, including Henry Ness, later died from their wounds.

A nudge from FDR’s administration
Bloody Friday threatened to provoke full-scale economic warfare in the streets of Minneapolis, but the crisis soon passed after a distinguished visitor from Washington paid a visit to Minnesota. In early August, President Franklin D. Roosevelt came to Rochester for a ceremony honoring the Mayo brothers. While he was there, Olson briefed him on the strike and its devastating impact on the state.

While Minnesota’s governor was meeting with the president, the editor of the Minneapolis Labor Review, Robley Cramer, conferred with Roosevelt’s chief aide, Louis Howe. Cramer told Howe that the Roosevelt administration needed to pressure Minneapolis businessmen to settle the strike.

Soon after Roosevelt’s visit, Jesse Jones, the head of the administration’s Reconstruction Finance Agency, began making calls to local industrialists in Minnesota who relied on Jones’ agency to meet their credit needs.

Jones’ calls, urging a prompt strike settlement, clearly had an impact. On Aug. 22, with little advance notice, the strike was ended when employers agreed to a new plan proposed by federal mediators.

While some employers would later seek to subvert the settlement, the tight hold of the Citizens Alliance had been broken and unions would face a more level playing field as they negotiated for higher wages and improved working conditions in Minneapolis.

More than 70 years later, the truckers strike of 1934 points up the indispensable role that political leadership has played in the past in redressing economic inequities and that it can play again in 21st century America.

Remembering the truckers strike of 1934