WASHINGTON – Sen. Kent Conrad,  D-N.D., has one of the safest seats in the Senate, having been elected four times with increasingly large victory margins, including nearly 70 percent in 2006. But he’d better hope that a young woman from North Dakota currently living in New York doesn’t return home to run against him. 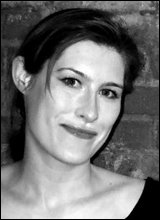 She probably won’t, since she’s his daughter, but Jessamyn Conrad would be a formidable opponent. The 30-year-old Conrad, who is pursuing a doctorate in art history at Columbia University, has just published a book that qualifies her as an expert on all things political. It’s called “What You Should Know About Politics … But Don’t: A Nonpartisan Guide to the Issues.”

She recently made her debut as an author at a book-signing party on Capitol Hill hosted by her proud father. More than 20 senators of both parties – including Majority Leader Harry Reid, D-Nev., and John Thune R-S.D, a potential running mate for GOP presidential hopeful Sen. John McCain – showed up and bought the book.

One of the few who wasn’t there was Sen. Barack Obama, even though he contributed a cover blurb calling the book “engaging and inspiring” and saying that “reading this book should make you want to vote.” Five other prominent figures also wrote blurbs praising the book: former Vice President Walter Mondale; former Sens. Tom Daschle, Bob Dole and Trent Lott; and Pulitzer Prize-winning historian Doris Kearns Goodwin.

Politically useful ties in N. Dakota
The younger Conrad’s impressive résumé includes an undergraduate degree in social anthropology and Islamic art history from Harvard and a master’s degree in historical studies from Cambridge University. She also has politically useful ties to her home state that include her uncle, former Republican Gov. and current U.S. Secretary of Agriculture Ed Schafer, and her stepmother, North Dakota State alumna and Major League Baseball lobbyist Lucy Calautti, who was once chief of staff to Sen. Byron Dorgan, D-N.D. 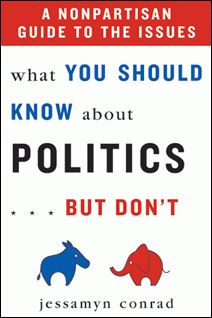 She describes herself as a “disappointed Democrat with a strong libertarian streak,” and notes that she once ran as a write-in candidate for soil conservation office.

“As my mom used to say, we’re from North Dakota. Everybody gets to be something for a while. As long as you bring a hotdish.” She writes that North Dakotans are “an unusual blend of conservative and liberal” – they gave President Bush a bigger percentage of votes than his home state of Texas while the entire three-man congressional delegation is Democratic.

Describing her father as “a somewhat conservative Democrat,” she explains that she wrote the 312-page book “to fill a void, the existence of which has been made all the more apparent by myriad mudslinging volumes in the Ann Coulter/Michael Moore mold … that have more to do with misplaced hate than thoughtful contemplation of the issues ahead.”

She said she became interested in politics when the U.S. invaded Iraq. “I had studied Islamic art, Middle Eastern history, and Arabic in college, and I was shocked by how little even the media knew about the issues they were covering.” (She neglects to mention that her father was one of only 23 senators who voted against the Iraq war resolution in 2002.)

Critical of both parties
Surprisingly, Conrad, who has no party affiliation, is sharply critical of both her father’s party and the Republicans, and of the political system in general.

“In another era, I probably would have been a Rockefeller Republican,” she writes. “I loathe the entrenched political machines of both parties, which I think are dangerous and far too often misleading, manipulative and fundamentally dishonest. So in that sense, you might say I’m a populist.”

She takes an even-handed, dispassionate approach while discussing subjects that include the electoral process, the economy, foreign policy and the military, healthcare, energy, the environment and trade. In her chapter on the economy, she doesn’t mention her father’s role as chairman of the Budget Committee or his strong opposition to President Bush’s fiscal and budgetary policies, which he has said “dig us deeper into deficit and debt” even as “the Bush administration talks about fiscal responsibility.” Nor does she talk about Sen. Conrad’s opposition to most free-trade measures and his support of budget-busting subsidies to farmers.

However, she could well have been referring to her father and other moderate Democrats when she wrote: “The economy creates strange political bedfellows and reflects major ideological shifts. For one thing, policies such as deficit spending and economic intervention advocated by Democrats and strongly opposed by Republicans in the early twentieth century eventually caught on so that by the 1960’s, Republicans supported some formerly liberal economic ideas. However, conservative views about managing the deficit and debt that were touted by Republicans during the ’80s are now more commonly held by Democrats.”

Not surprisingly, Conrad also doesn’t mention her father’s involvement in the recent Countrywide financial loan scandal. In June, it was reported that Conrad was one of several senators who received mortgages on favorable terms for a second home and an apartment building in Bismarck because of ties to Countrywide CEO Angelo Mozilo. Conrad has denied any knowledge that he got special treatment and donated the mortgage discount to charity, but he has been criticized by ethics watchdogs, who have asked the Senate Ethics Committee to investigate.

Come to think of it, if this book hits the best-seller lists, maybe his daughter will decide to run against her father anyway.

Albert Eisele, a former Washington correspondent for the Duluth News-Tribune and St. Paul Dispatch and Pioneer Press, is editor-at-large and founding editor of The Hill, a newspaper that covers Congress.