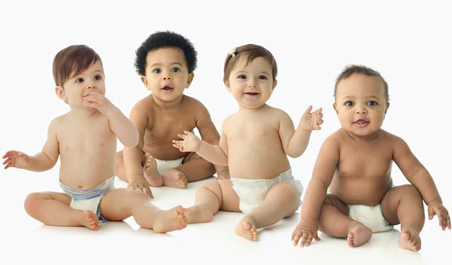 America’s population will be both older and more diverse by the middle of the 21st century, according to U.S. Census Bureau projections released today – and its numbers will grow to about 439 million. No one group will constitute a majority, as whites do today; the populations we today call minorities will together number more than 50 percent.

As Kat Glass of McClatchy Newspapers put it, “In a few decades, all Americans will be minorities.”  Glass neatly laid out the bureau’s projections – which could, of course, change depending on any number of events or policy decisions between now and then – with the added insights of Grayson Vincent, a demographer for the Census Bureau.

“• Non-Hispanic whites, who are two-thirds of the population today, are older, dying off faster and producing fewer children than other groups, Vincent said. By 2050, they’ll number 203 million in a nation of 439 million.

“• Hispanics are projected to triple by 2050, when they’ll be nearly a third (133 million) of the population. Spurring Hispanic growth is the group’s large natural increase — birth rate minus death rate — which Vincent attributed mainly to its youth and fertility. Immigration is an important but lesser factor, she said.

“• American Indians and Alaska Natives are projected to rise from 1.6% to 2% (9 million) of the population.”

Multiracial nation, individuals
“Not only will the nation be more racially diverse, but more American individuals will be too,” noted David Goldman at CNNMoney. “The percentage of bi- or multi-racial people in the United States is expected to more than double to 3.6% from the 1.7% who identify as such now.”

Already, demographers, economists and sociologists are responding to all this with some projections of their own. Several have focused on the age shift and its ramifications.

“With these projections, the American economy may have to make some adjustments,” Goldman wrote. He quoted Peter Morici, a University of Maryland professor of economics:

“With the number of people over 65 expected to grow, that’s going to put more and more pressure on Social Security. We’re going to have to ask people to work until they’re 70, and we’ll need a more reasonable health care system.”

Implications for Social Security system
Morici’s comment on Social Security pressure is in line with the thinking of economist Alice Rivlin, who wrote in a recent article on the Brookings Institution website: “With the large baby boom generation retiring and Americans living longer, the ratio of workers to Social Security beneficiaries is falling fast. Quite soon the payroll taxes coming into the Social Security system will be inadequate to pay all the benefits promised to retirees. Restoring the system’s solvency is crucial to almost everyone’s retirement security. The longer we put off setting Social Security on a firm footing, the more expensive the fix will be – indeed, we have waited too long already.

“Fixing the Social Security program is relatively simple – far less complex than reforming health care. It requires choosing a combination of revenue increases and benefit reductions, but relatively small changes will do the trick. Emotions run high on which combination is best, but the list of options is short, and political compromise is clearly within reach.”

Rivlin says both political parties will have to compromise. “Republicans have to give up diverting existing revenues into private accounts. But they can preserve private accounts on top of Social Security and strengthen incentives for individual retirement savings without going to ‘privatization.’ Democrats have to accept future benefit cuts, but they need not be drastic and can spare current retirees and lower-income beneficiaries. The package could include future gradual increases in the retirement age and concentrate benefit cuts on higher income people. As part of the compromise, both parties must agree to revenue increases, but they, too, can be modest and can spare low-income individuals.”

Other experts are exploring the possible ramifications of increased diversity.

“The main reason for the accelerating change is significantly higher birthrates among immigrants,” noted Sam Roberts of the New York Times, who also wrote that the latest projections “are predicated on current and historical trends, which can be thrown awry by several variables, including prospective overhauls of immigration policies and sudden increases in refugees.”

Roberts quoted Mark Mather, a demographer with the Population Reference Bureau: “Another factor is the influx of foreigners, rising from about 1.3 million annually today to more than 2 million a year by midcentury, according to projections based on current immigration policies. ‘No other country has experienced such rapid racial and ethnic change.’ “

‘Profound political cleavages’
According to Washington Post writer N.C. Aizenman, “William H. Frey, a researcher with the Brookings Institution, said the demographic changes could presage equally profound political cleavages. ‘Politically, whites will be much more interested in issues like health care and pensions,’ he said. ‘At the same time, the growing minority population – Hispanics, especially – will be concerned about more youthful issues, like schools.'”

In a similar vein, McClatchy’s Glass quoted Mark Sawyer, director of the Center for the Study of Race, Ethnicity and Politics at the University of California at Los Angeles, who observed, “If we don’t invest in educating and training African-American kids, immigrants and Latino kids, we won’t have a middle class. We’ll have a very, very poor disposable class that’s largely black or brown.”

The growing Latino presence could also prompt a backlash against immigrants,  Andrew Grant-Thomas, deputy director of the Kirwan Institute on Race, told the Columbus Dispatch.

“We are already in the midst of a nativist conversation when we talk about immigration,” Grant-Thomas said. “We can certainly imagine stronger and stronger efforts to slow immigration, whether legal or undocumented.”

At the same time, scientists are learning just how little significance race has in a biological sense; it is now seen as more of a sociological concept. And just as individuals are becoming less definable in terms of ethnicity, Americans’ definitions of race and ethnicity are becoming more complex, writes McClatchy’s Kat Glass.

“The study predicts that the number of Americans who say they’re biracial or multiracial will more than triple from 5 million to 16 million people by 2050.”

What will become of our elders?
By Mary Gallagher (Community Voices)
July 28, 2008

Minnesota's foreign-born population: then and now
By Britt Robson
March 13, 2008

To heal the wounds of a population that is fatter, older and sicker than ever, it takes more than Band-Aids
By Carla Solberg
November 26, 2007

U program to lend inspiration as boomers 'grow up'
By Kay Harvey
November 14, 2007