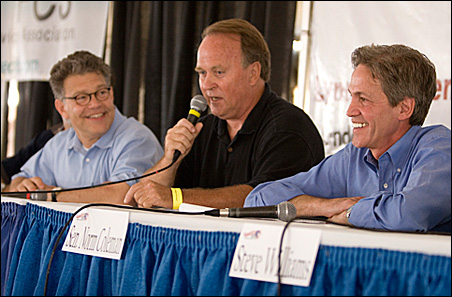 The first debate of the election season between challenger Al Franken and Norm Coleman didn’t take long to get rolling today. There were no false smiles to kick off the opener. No pats on the back.

In fact, it took Franken, the DFL-endorsed candidate for the U.S. Senate, roughly 15 seconds before he was taking his first verbal roundhouse at Coleman, the Republican incumbent.

In response to a question from an ag journalist about energy independence, Franken said, “Norm Coleman is in the pocket of Big Oil. He’s received more contributions from Big Oil than any politician in the history of Minnesota.”

There was a hush in the massive tent at the annual Farmfest, which is being held near Morgan, about 100 miles west of the Twin Cities. One minute, people had been strolling through the carnival-like atmosphere of this annual event, eating fair food, greeting neighbors, telling jokes.

The next moment, they were hearing the challenger’s verbal blast.

Crowd cool to Franken blasts
It apparently was not what they came to hear. Franken’s opening was greeted with tepid applause.

When it was the Coleman’s turn to speak to the opening question, he went into his rapid-fire style, words pouring smoothly from his lips: “You’ve got to tap into more domestic production. Nuclear. Renewable. You gotta do the whole ball of wax.”

Coleman and Franken weren’t the only participants in the 1½-hour debate. The lineup also included two from the Independence Party — Steve Williams, the endorsed candidate, and Dean Barkley, its best-known candidate. Several others among the field of 18 candidates — DFLer Priscilla Lord Faris, the Independence Party’s Jack Uldrich and a host of lesser-knowns not invited to take part — also were circulating at the edges of the crowd, looking for a bit of attention.

In the end, Barkley started gaining some attention from the crowd of several hundred by mixing humor and contempt for Washington. Williams got a laugh, too, with this line about immigration: “The only people who need to be deported are the people in Washington.”

But, of course, most of the attention was focused on Coleman and Franken. Coleman was clearly the favorite of the crowd, which did not appear to care for Franken’s contempt of the senator. Even so, Franken kept blasting.

“Do you like the leadership we’ve had for the last 7½ years?” Franken asked at one point.

There was almost no response.

Some uncomfortable throat-clearing from the crowd.

“The Bush-Coleman economy has driven people into the ditch, and Coleman was riding shotgun,” said Franken.

A couple of very low boos.

Meantime, Coleman was upbeat. He didn’t look at all like a Minnesota farmer, what with his blue, perfectly pressed, sweat-free shirt and his beige trousers. (Coleman’s wife, Laurie, was dressed almost identically.) Franken, meanwhile, was wearing a blue shirt, too — a rumpled one.

Coleman spoke to the farmers as if he loved the smell of manure in the morning. In fact, at one point he draw applause by saying, “Manure is not a hazardous waste.”

Nobody asked him how he and Laurie would feel about living downwind from a massive feedlot.

Coleman at home with his ‘folks’
Coleman talked about “my livestock folks” and my “poultry folks” and my “sugar beet folks” with great confidence. Acronyms of various farm programs rolled off his tongue. And he got big applause when he took a shot back at Franken for blaming “Bush-Coleman” for high gasoline prices.

“Gas has doubled since Nancy Pelosi became Speaker of the House,” Coleman said.

As the crowd applauded with gusto, Coleman smiled that big smile. “I bring people together” for the good of all Minnesota farmers, he said. “I get things done.”

(DFL Rep. Collin Peterson, head of the powerful House ag committee, says that Coleman will have a lot of explaining to do to Minnesota sugar beet farmers before he gets their vote. Coleman’s support of the Central America Free Trade Agreement has brought more Central American sugar into the U.S. market. But Peterson, wearing a baseball cap, blue jeans, a sweaty knit shirt and cowboy boots, shrugged his shoulders at Coleman’s political support of farmers in general. “He’s been sort of mixed,” Peterson said.)

When the subject was infrastructure — roads, railways and barges are big issues in rural Minnesota — Barkley gave the most honest answer of any of the candidates.

“There is no free lunch,” he said. “If we’re going to fix the bridges and the roads, somebody is going to have to pay for it. Bonding. That’s the Republican approach. Let our children pay for it. That’s financial child abuse. We ought to be ashamed of ourselves.”

That response seemed to bring about a collective gulp from the crowd. Was he hinting at a tax increase?

“I support bonding for transportation,” he said. “I disagree with a gas tax increase. There are other ways to fund infrastructure.”

He didn’t specify what those ways might be, but the crowd loved him and his build-now, pay-later approach.

Franken, Coleman find positives in their performances
Over and over, this crowd showed its appreciation for Coleman, though Franken said later that he thought he was winning people over as the debate progressed.

Hmmm. Franken must have picked up things from the crowd many of us missed.

For his part, Coleman was clearly pleased at the way things had gone.  He said he was not surprised that Franken started swinging from the get-go.

“He probably checked his poll numbers before he got here and said, ‘I’ve got to go after him,’ ” said Coleman. “He’s gotta do what he’s gotta do. But I think people want optimistic, uplifting leadership. That’s what I am.”

Coleman expressed mock empathy for Franken trying to win over a rural crowd.

Then, he spotted “a close friend,” a farmer.

He waved and smiled, and his close friend waved back. For all his big-city style, this was Coleman country.

Senate debate at Farmfest, it turns out, is clearly held in ‘Coleman Country’