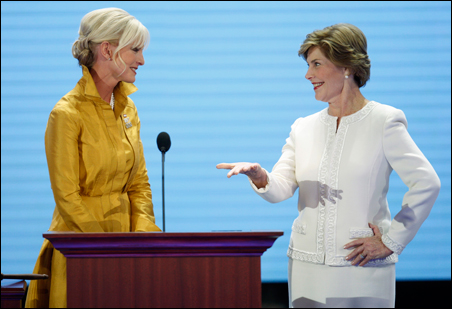 Since the Republican National Convention started, Cindy McCain has been occasionally spotted about town sporting a hot-pink cast on her right forearm.

She has been wearing it since late August, when she apparently suffered a sprain of her right wrist. She was greeting an overzealous fan while on the campaign trail with her husband, Republican presidential nominee John McCain.

In addition to her stylish splint, Mrs. McCain also brought something else to Minnesota: Oscar.

McCain and Laura Bush both wore the extra haute-couture designer during their opening night appearances at the convention proceedings Monday night. But far from blending into the red, white and blue backdrop, McCain’s dress stood out. It was golden yellow with a full skirt, tight waist and long sleeves.

And that’s not a partisan statement.

Olson’s critique of McCain is based on a keen sense of “what to wear when.” You know, context.

Upscale image comes through
When McCain appeared during the first night of the convention, it was a scaled-back affair, focused on sending relief and support to the Gulf Coast. Laura Bush was in a sensible white knit suit, but Olson says McCain came off looking like a wealthy woman meeting the ladies for lunch.

Olson says McCain’s tight up-do is also not giving the candidate’s wife much street – or Middle America – cred (unlike Sarah Palin, the self-described “hockey mom” who appears to have had instant credibility with middle-class GOP voters despite her own – though decidedly looser – up-do).

“(Cindy McCain) is beautiful, but a little out of touch,” says Olson. “She’s a millionaire, and it looks like it; like she’s walking off the pages of Town and Country.”

While the style cognoscenti may see a need for a Class make-over, the party faithful only see the classy in Cindy McCain.

“I just really like the way she goes about her life from all of the different things that I’ve heard,” says GOP delegate and former state Sen. Betsy Wergin. “She’s classy with courage.”

“Gorgeous” and “classy” are two words often on the lips of Cindy McCain’s GOP fans when describing the woman who could be the nation’s next first lady.

“She not only brings the glamour that she has – and she’s a beautiful woman – but it’s a style, a sense of security,” says Minnesota alternate delegate Linda Presthus of Edina.

Presthus and others compare McCain to Nancy Reagan, but with “a little more upbeat style,” says Presthus.

“She’s classy,” chimes in Republican delegate and party fundraiser Margery “Midge” Dean of St. Cloud. “It’s the way she dresses, the way she walks, the way she acts,” says Dean. “You can tell she’s had a good upbringing.”

Dean says, “We don’t really know Cindy McCain, what type of person she is.” But the St. Cloud fundraiser (she says she raised $100,000 for the McCain campaign) says she thinks McCain would be a great first lady.

Cindy McCain, 54, is a very wealthy woman. She helps run – and is heir to – the distribution arm of the Anheuser-Busch beer company. Her personal estimated net worth is $100 million. And MSNMoney.com reports she controls the McCain family investment portfolio worth an estimated $36 million to $53 million.

She’s dealt with significant ups and downs
Despite a life of privilege, Cindy McCain has dealt with significant challenges. She went through treatment for an addiction to pain killers in the 1990s. She suffered a stroke in 2004. And her substantial wealth has sometimes clashed with her husband’s political career (including publicity over personal investments with Charles Keating, refusing to release tax returns, and campaign use of private jet).

In recent years, Cindy McCain has become a prolific philanthropist. According to the McCain/Palin campaign website, she serves on the boards of many nonprofits, including CARE, and Operation Smile.

In 1988, McCain founded the American Voluntary Medical Team, which offered medical assistance in far-flung, war-ravaged countries. She ran the nonprofit until 1995.

On the campaign trail with her husband, Cindy McCain has dazzled many a supporter with her poise, pearls and pedigree.

Minnesota delegate Presthus puts it this way: “It’s knowing who she is, being confident in herself, and just an overall package of a beautiful, beautiful woman.”

As for her upper-crust style and high-brow taste for fashion? Alternate Wergin could care less.

“I don’t tend to notice those things,” says Wergin. “I tend to look at the eyes. I always look at the eyes for the honesty and the genuineness in the person. And her eyes are so genuine. So the color of the dress has never mattered to me, that’s just who I am.”