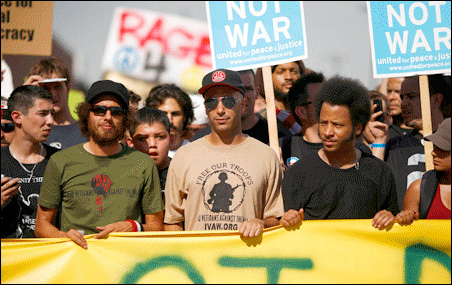 REUTERS/Eric Thayer
Members of Rage Against the Machine, shown marching in a protest during the Democratic National Convention, will perform at Target Center tonight.

After two days of skirmishes in St. Paul, the ongoing battle between police and a group of apparent anarchists who seem intent on disrupting the Republican National Convention may move west tonight.

Police are preparing for trouble at tonight’s concert by Rage Against the Machine, a political rap metal band appearing at Target Center in Minneapolis.

A riot erupted in Los Angeles in 2000, when the band played a free concert near the Democratic National Convention. Anarchists gathered, threw bottles and took over the event. Police moved in, herding the crowd and eventually confronting a group of 100 in the streets. Here’s a Los Angeles Times timeline of the incident.

Twin Cities area police brought in a deputy Los Angeles police chief recently to learn more about the way police handled the crowd at that 2000 incident.

At a Wednesday morning briefing, St. Paul Police Chief John Harrington said he wouldn’t relate what the LA cop advised, lest the anarchists get tipped on police strategy.

He did say, though, that St. Paul police — and the thousands of other officers brought in to maintain order during the RNC — will be available to support Minneapolis police tonight.

Harrington also reported that 11 people were arrested Tuesday in connection with convention disruptions. On Monday, nearly 300 were arrested, following a series of afternoon and evening incidents in various spots around downtown St. Paul. Windows were broken Monday at several businesses and on two police cars.

Charges against 170 people are expected this afternoon,. and investigations into the other cases continue.

Seven of Tuesday’s arrests involved suspects in Monday’s property damage and assault incidents, Harrington said. Those suspects were picked up in the Cathedral Hills area, a mile or so from the Xcel Energy Center, the convention venue. ‘

Three more people were arrested near Mears Park in the late afternoon, as they appeared to be trying to disrupt a peaceful march held by a group representing the poor and homeless. About 1,000 marched peacefully through town; most left when the march ended near the Xcel Energy Center, but a group of 100 or so agitators and journalists covering them filled the street outside Mickey’s Diner, at Seventh and St. Peter streets. Police used tear gas and pepper spray to disperse the group, which included WCCO-TV reporter Caroline Lowe. She said she was momentarily blinded but not injured.

No arrests resulted from that confrontation.

Harrington said informants in the anarchist groups helped police prepare for this week’s confrontations, and led to pre-emptive strikes last weekend that garnered materials police believe were intended for use against them, including feces, urine, makeshift weapons and the makings for Molotov cocktails. (Spokespersons for those arrested in the raids have denied the charges.)

Although the rioters have been unable to stop or delay convention activities — only Hurricane Gustav has done that, so far — the incidents between riot-outfitted police and the anarchists has caused many to stay away from downtown St. Paul.

Harrington said a planned protest on Tuesday by truckers was greatly reduced: 200 semis had been expected to parade through town but only three showed up. Apparently the others were afraid of damage to their rigs, the chief said.

And activity and traffic levels in parts of downtown two or more blocks away from the convention activities seems to have fallen even below sleepy St. Paul standards. Some restaurants are reporting far less business than expected. Some are sending back extra food they’d ordered.