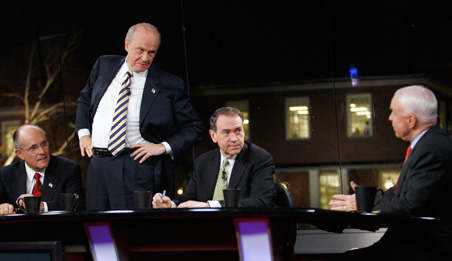 Perhaps political prognosticators should take a rest after so many struck out in guessing Sen. John McCain’s choice for vice president. But as the fall presidential campaign gets started in earnest, a few intrepid souls are responding to McCain’s Sunday vow on CBS News’ “Face the Nation” (PDF) to place Democrats – note the plural – in his Cabinet if he wins in November.

Leaving aside the question of who the next president will be, let’s have a look at who’s saying what about a potential McCain Cabinet. We’ll survey guesses for Democratic nominee Sen. Barack Obama’s Cabinet on another day.

So far, the only consensus seems to be that McCain would ask Connecticut Sen. Joseph Lieberman, a self-described independent Democrat, to be one of his Cabinet members – although after Lieberman’s speech at the Republican National Convention in St. Paul last week there’s the question of whether he should be counted as a Democrat.

Indeed, Alan K. Ota at CQ quoted Sen. Arlen Specter, R-Pa., as saying last week that he plans to renew a discussion with Lieberman about switching parties: “I would like to see him vote with Republicans in September,” Specter said. “He’s practically there.”

Right. Count Lieberman as you will; many place him high on their lists, whatever his affiliation.

Moving right along: Cabinet guessing for McCain, though renewed this week, got its most visible start in February when his state’s largest newspaper, the Arizona Republic, responded to McCain saying that he’d be looking for Cabinet members who “just share my conservative philosophy and views: less government, less regulation, lower taxes.”

Dan Nowicki wrote that McCain “volunteered that conservationism would be a priority, saying he would hope ‘to preserve the great natural treasures of the West and our state and do whatever we can to protect our environment. I return to kind of the Teddy Roosevelt outlook towards things.’ “

Also, Nowicki noted, “Over the past year, he often has talked about approaching U.S. business leaders to serve their country by taking on federal-government responsibilities. He specifically has mentioned Fred Smith of FedEx, John Chambers of Cisco Systems, Steve Ballmer of Microsoft and billionaire investor Warren Buffett as possible Cabinet members.”

• Sen. Joe Lieberman in a prominent job, possibly even secretary of State.

Of course some things have changed since then. Gramm, for example, made headlines with his “whining” remark in a Washington Times interview in July:

“You’ve heard of mental depression; this is a mental recession. … We have sort of become a nation of whiners. You just hear this constant whining, complaining about a loss of competitiveness, America in decline.”

Whether that hurts his chances after the election no one knows. Gramm stepped down from the McCain campaign as national co-chair and economic adviser after the remarks, but he has been seen with McCain’s advisers since then.

Along with Gramm, Garrett Graff of Washingtonian magazine mentioned Jack Kemp, Warren Rudman and Pete Peterson “as good bets for Treasury or for the National Economic Council.” He suggested that Mike Huckabee “could be rewarded for supporting McCain with a post like Health and Human Services secretary.”

“On foreign policy,” Graff wrote, “McCain has expressed admiration for Bill Cohen, Gary Hart, and Sam Nunn, any of whom could be a wild-card choice for Defense, State, or the National Security Council.” Note the two Democrats there.

“Perhaps Fred Thompson or Deborah Wong Yang might become attorney general. A former state judge now at Gibson, Dunn & Crutcher, she was the first Asian-American woman to serve as a US Attorney and led the largest US Attorney’s office outside of Washington as head of the Central District of California, which includes LA. Ohio’s Mike DeWine is a friend of McCain’s and a possible AG as well.”

• Secretary of Health and Human Services: Mark McClellan, former head of the Food and Drug Administration and former Sen. Jim Talent of Missouri.

• Transportation secretary: “One governor above all is closely identified with transportation: Minnesota’s Tim Pawlenty, because of his handling of the aftermath of the Minneapolis bridge collapse. Despite praise for his early efforts after the collapse, the state Legislature reversed his veto of a key transportation bill, a policy loss that could dull his luster for the job.” Or possibly former Kansas Gov. Bill Graves, he says.

Few Democratic names are showing up on such lists, though choosing someone from the opposing party isn’t new. William Cohen, a former Republican senator, was President Clinton’s secretary of Defense, for example, and former Congressman Norman Mineta, a Democrat, was President Bush’s Transportation secretary.

If you have some Democrats to add to the potential McCain Cabinet (or anyone to add, for that matter), how about contributing them in the Comments section below? Since McCain’s choice of Alaska Gov. Sarah Palin embarrassed just about every pundit except Rush Limbaugh, you don’t have to worry about being wrong.