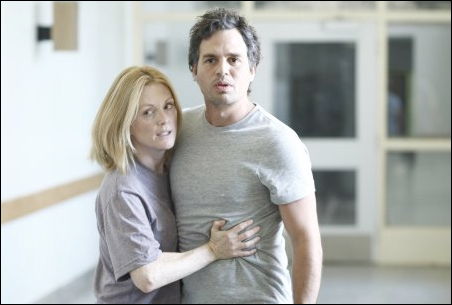 In the new film “Blindness,” a mysterious illness strikes an unnamed town, leaving its victims blind. The government quarantines the infected in an old mental asylum, which soon becomes a filthy, chaotic hellhole where helpless blind people defecate in hallways and brutalize each other for food.

“This is the kind of movie that’s going to make my life harder,” said Jennifer Dunnam, president of the National Federation of the Blind of Minnesota. “The people in this movie just seem to lose all capacity for creativity and for taking care of themselves, and it’s a problem when real people already think that about blind people.”

The group, along with other chapters of the National Federation of the Blind across the country, will be protesting outside different theaters when the movie opens today.

The Minnesota protest will take place in Rochester, where the local chapter is having its annual convention this weekend. Dunnam said she expects more than 50 protesters.

The film today received a positive review in the Pioneer Press and a negative one in the Star Tribune. The movie, directed by Fernando Meirelles, stars Julianne Moore and Mark Ruffalo.

Miramax Films said in a statement that the company was “saddened” by the federation’s decision to protest “Blindness.” The statement described the film as “a courageous parable about the triumph of the human spirit when civilization breaks down.”

But Chris Danielsen, a spokesman for the National Federation of the Blind, said he objects to the parable itself.

Both Danielsen and Dunnam were able to attend early screenings of the film.

Dunnam said it wasn’t hard to follow the details of what was happening even without audio description. She’s also read the book the movie is based on, written in 1995 by Portuguese novelist and Nobel Prize winner Jose Saramago, and she said the film very closely followed the original text.

In the story, a group of inmates at the asylum takes over and starts brutalizing the other captives, extorting sex and jewelry for food.

Julianne Moore stars as the one character in the asylum who has not lost her sight, though she keeps this a secret from the others.

There is also a character who was born blind and can read Braille. “He does absolutely nothing to sort of teach people,” Dunnam said. “He sides with the criminals.”

Dunnam said responding to this movie is important because the biggest problem blind people face is how others perceive them. “Other people start thinking they can’t do anything, and that’s what’s causing our very high unemployment rate.”

The National Federation of the Blind estimates that upward of 70 percent of blind people in the U.S. are unemployed.

“Obviously, if all of a sudden everyone became blind, it would be a struggle,” Dunnam added. “People wouldn’t have the skills that they needed to function. But it’s an extreme response for people to suddenly not be able to care about how they look or be able to dress themselves.”

“The movie is simply inaccurate,” Danielsen said. “It’s not a difference of opinion. If somebody shows you a picture and says, ‘This is an elephant,’ and it’s a kangaroo, and you say, ‘No, that’s a kangaroo,’ you’re not expressing a difference of opinion. The movie has nothing to do with how blind people act or what blind people do or how we live our lives.”