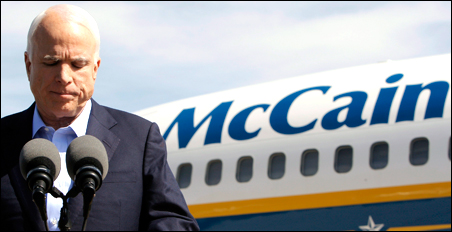 On the eve of the second presidential debate in a campaign that was supposed to be about issues, the McCain and Obama campaigns have switched into personal attack mode.

Obama, as has been his style, wasted no time responding. The Los Angeles Times reports:

“‘Sen. McCain and his operatives are gambling that they can distract you with smears rather than talk to you about substance,’ Obama said. ‘They’d rather try to tear our campaign down than lift this country up. That’s what you do when you’re out of touch, out of ideas and running out of time.’

“The dust-up comes as Obama’s poll numbers have risen in recent weeks, even in some traditionally Republican states, as Wall Street’s woes dominate the news. According to several polls, more voters see Obama as better able to handle the economy than McCain.”

Obama campaign responds
And on Sunday the Obama campaign said it would respond in kind to attacks from Palin and McCain by reminding voters of McCain’s connections in the 1980s to disgraced savings and loan tycoon Charles Keating. The Washington Post  reports on an e-mail sent to Obama supporters:

“‘During the savings and loan crisis of the late 80s and early 90s, McCain’s political favor and aggressive support for deregulation put him at the center of the fall of Lincoln Savings and Loan,’ Obama campaign manager David Plouffe wrote in an e-mail to campaign supporters that was released last Sunday to the media as well. ‘… Overall, the savings and loan crisis required the federal government to bail out the savings of hundreds of thousands of families and ultimately cost American taxpayers $124 billion. ‘Sound familiar?'” The campaign has produced a documentary about McCain and Keating.

Discussion of the Obama-Ayers connection is not new on the campaign trail. It came up during the Democratic primary and McCain has mentioned it previously. In a detailed look at the relationship, The New York Times reported Saturday:

“A review of records of the schools project and interviews with a dozen people who know both men, suggest that Mr. Obama, 47, has played down his contacts with Mr. Ayers, 63. But the two men do not appear to have been close. Nor has Mr. Obama ever expressed sympathy for the radical views and actions of Mr. Ayers, whom he has called ‘somebody who engaged in detestable acts 40 years ago, when I was 8.’

“Obama campaign aides said the Ayers relationship had been greatly exaggerated by opponents to smear the candidate.”

The Times says that Obama and Ayers worked on a school reform project together in Chicago in the 1990s and that Ayers hosted an event for Obama when he was preparing to run for the state legislature.

Conventional wisdom has it that attacks and negative campaigning, however distasteful, are often effective. But some commentators question whether that is the case so late in a campaign.

“At a time of extreme economic crisis at home and two wars abroad, John McCain is gambling that an attack mounted by Sarah Palin on Barack Obama’s tangential ties to 1970s radical bomber Bill Ayers will reverse the Arizona Senator’s steadily diminishing prospect of victory on November 4. This strategy carries high risks. First and foremost, a number of experts in the field doubt that when the economy has been on the brink of collapse, when the situation in Afghanistan is worsening, and the debate over the US war in Iraq has intensified, negative campaigning is an effective political tool. Vanderbilt political scientist John Geer, who has studied attack ads and found that they can be politically useful under certain circumstances, says that in the case of Palin’s offensive, ‘unless [the McCain campaign] hits on some new, credible theme, voters are likely to view these attacks as desperate.'”

“By claiming that Democrat Barack Obama is ‘palling around with terrorists’ and doesn’t see the U.S. like other Americans, vice presidential candidate Sarah Palin targeted key goals for a faltering campaign. And though she may have scored a political hit each time, her attack was unsubstantiated and carried a racially tinged subtext that John McCain himself may come to regret. First, Palin’s attack shows that her energetic debate with rival Joe Biden may be just the beginning, not the end, of a sharpened role in the battle to win the presidency.

“… Palin’s words avoid repulsing voters with overt racism. But is there another subtext for creating the false image of a black presidential nominee ‘palling around’ with terrorists while assuring a predominantly white audience that he doesn’t see their America? In a post-Sept. 11 America, terrorists are envisioned as dark-skinned radical Muslims, not the homegrown anarchists of Ayers’ day 40 years ago. With Obama a relative unknown when he began his campaign, the Internet hummed with false e-mails about ties to radical Islam of a foreign-born candidate. Whether intended or not by the McCain campaign, portraying Obama as ‘not like us,’ another potential appeal to racism. It suggests that the Hawaiian-born Christian is, at heart, un-American.”

Stephen Hayes, writing in The Weekly Standard, argues that discussion of the Obama-Ayers connection is legitimate.

“I haven’t looked into the Obama-Ayers relationship as closely as some others, but these attempts to distance Obama from Ayers seem a bit too eager and they rarely mention facts that point in the other direction, such as Obama’s praise for Ayers very radical writings. But my big problem with these supposed ‘fact-check’ articles is this: If Obama could never be accused of ‘palling around’ with Ayers, why would Chicago Mayor Richard Daley, who is close to both men, describe them as ‘friends?’ ‘They’re friends,’ he said. ‘So what?’

“Two questions: Shouldn’t Mayor Daley’s comments be included in articles assessing the relationship between Ayers and Obama? Are ‘friends’ different than ‘pals?'”

And conservative columnist William Kristol, writing in The Times, quotes Palin as saying the latest attacks are only the beginning:

“I asked at the end of our conversation whether Palin, fresh off her own debate, had any advice for McCain. ‘I’m going to tell him the same thing he told me. I talked to him just a few minutes before I walked out there on stage. And he just said: ‘Have fun. Be yourself, and have fun.’ And Senator McCain can do the same.’ She paused, and I was about to thank her for the interview, but she had one more thing to say. ‘Only maybe I’d add just a couple more words, and that would be: Take the gloves off.’

Doug Stone is a former reporter for the Minneapolis Tribune and assistant news director at WCCO-TV. He writes on national and international affairs.