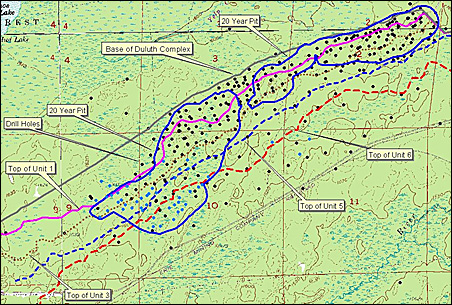 Courtesy of Polymet Mining
The area of the proposed mine near Hoyt Lakes.

More than three years and nearly $20 million have gone into the much-anticipated environmental impact statement on Minnesota’s first sulfide-metals mine, but now the document faces a dicey legal challenge before it has even been publicly released.

If, as is likely, the challenge winds up in state court it could add to costly delays to the permitting process and further frustrate the beginning of an industry that has struggled to get going with what Iron Range advocates say would be a giant economic jolt to a region depressed by a downturn in logging and the loss of mining jobs to technological efficiencies.

Still more delay could come from the need to complete a complex land swap with the U.S. Forest Service so that Vancouver-based PolyMet Mining can gain access to the very land it needs for its planned operation.

The St. Paul-based Center for Environmental Advocacy said recently that the environmental document being prepared by the Minnesota Department of Natural Resources is incomplete because it fails to fully consider an underground mine that is environmentally safer. PolyMet Mining has said its mine would be open pit.

“They are way off base,” PolyMet’s LaTisha Gietzen said of the MCEA’s charge. She said that the DNR “has analyzed” the underground option and has found it “economically and technically unfeasible.”

PolyMet’s ore body near Hoyt Lakes, Minn., is very close to the surface, making an underground operation technically unworkable, Gietzen said. Other companies are proposing underground mines because, she said, their ore bodies are a thousand feet or more under the surface.

But MCEA’s Mary Marrow said that state law is clear that all reasonable options must be analyzed in an environmental impact statement (EIS) and, especially, that higher costs of an option do not relieve the DNR from analyzing it.

“This is close to being a slam-dunk case,” Marrow added, saying the advocacy group will challenge the EIS in court if the document does not contain a full analysis of an underground mining operation.

The DNR’s Stuart Arkley, who’s overseeing the EIS, said the final draft document — expected to be released in November — will include the underground option, although not as fully as the open pit because of the economic and technical problems that the company and others have identified.

Pollution concerns
The MCEA and others have said that underground mining is environmentally superior because initial rock-crushing is done before ore is hauled to the surface and the waste rock is used to fill in empty caverns from the mining process. Underground mines also leave much less sulfide-bearing rock at the surface where they are exposed to the atmosphere and water leaching that turns sulfides into toxic sulfuric acid that, in time, could find its way into ground and surface waters.

Arkley said the DNR is sensitive to the problems of surface storage of sulfide-bearing waste rock, and the EIS will favor returning most of the rock to the open pits once mining is complete and covering it with water to minimize exposure. He said PolyMet would extract ore from one pit and 12 years later open a second, with waste rock returned to the first.

It is the potential for sulfide pollution that’s causing all the fuss on the coming of metals-sulfide mining to Minnesota. And while mining companies have pledged to do what’s necessary to ensure that sulfides do not escape, critics have said that no other copper-nickel mining operation in the world has made good on such promises; in several cases, states have been left with cleanup tabs costing tens of millions of dollars after mining companies went bankrupt or otherwise up and left.

Jon Larsen in the EIS section of the Minnesota Environmental Quality Board confirmed that two state laws specifically state that economic considerations alone cannot by themselves relieve the need to examine environmentally safer technologies in an EIS. Arkley said he is aware of the law’s provisions.

And while PolyMet’s Gietzen said in an interview that underground mining is impractical with an ore body so close to the surface, Marrow countered that the technology issue has not been previously raised by the company.

In that document, PolyMet says that an open pit mine would cost about $18 million while an underground mine would cost between $80 million and $150 million. Overall cost of the project is set at $380 million, with hundreds of temporary construction jobs and some 400 permanent jobs; there are up to eight other companies testing the so-called “Duluth Complex” for possible mining operations which, advocates say, would add billions of dollars to the Iron Range economy and thousands of jobs over several decades.

“The law is very clear,” Marrow said. “Besides, we really have no obligation to risk Minnesota’s environment to protect investors in a Canadian company.”

The issue raised by the MCEA is potentially critical because it could bring significant delay to the EIS process that precedes consideration of several state and federal permits to mine.

Overdue
The EIS is already about a year overdue; all costs for the EIS have been borne by the company.  PolyMet officials said last spring that they hoped that mining could begin as early as now, but even under the most optimistic time frame that will be delayed until at least next summer.

Another delay could come as a result of the need to complete a land-swap with the U.S. Forest Service to give PolyMet full title to land it needs for its open pit operation. Faced with up to two years of additional time to complete the land deal, PolyMet has turned to U.S. Sens. Amy Klobuchar and Norm Coleman and to U.S. Rep. James Oberstar for legislation to force a federal land sale and truncate the process. That legislation will be stubbornly fought by a gaggle of environmental groups led by the Minneapolis-based Friends of the Boundary Waters Canoe Area Wilderness, however, so passage is by no means certain.

If, as is likely at this point, the issue of the EIS ends up in court, it is difficult to predict how much time would be added.

Earlier, PolyMet said that its investors are becoming somewhat frustrated by the delays in the process.

In September, PolyMet entered into a partnership with commodities supplier Glencore AG of Stamford, Conn., that provided PolyMet with a $25 million convertible loan that would be immediately available with another $25 million available on completion of the EIS.

But PolyMet and Glencore have not yet closed on the deal, Gietzen said.

Want to know more about mining in Minnesota?

The MECA and the Sierra Club commissioned this report by a University of Montana professor (released in October 2007): “The Economic Role of Metal Mining in Minnesota: Past, Present and Future.”

The Minnesota Department of Natural Resources has reports on “What’s mined in Minnesota” and the history of mining in the state.

The DNR’s statements on its ongoing review of the PolyMet site are here.

On the Iron Range, a good environment is good for the economy
By Ron Way
Tuesday, Dec. 4, 2007