It chronicles a presidential campaign, yet the McCain Blogette covers everything but politics. Therein lies the charm.

Meghan McCain’s blog, McCain Blogette, which launched in 2007, provides behind-the-scenes glimpses into her dad’s presidential campaign, relying primarily on pictures with light text (often just captions) and periodic videos, along with a song of the day.

It is a political tool that Obama’s campaign cannot claim, a blog that allows viewers to see the white-haired war hero and longtime senator simply as Dad. And, better yet, to see him interact with his 24-year-old daughter, a demographic that tends to favor Obama.

At first glance, their relationship appears playful and affectionate. She teases his “totally lame” sweatshirt featuring an iron-on family picture and helps him multi-task, holding an iPhone to his ear while he prepares a plate of food. He calls her “Dracula” because she can’t sleep at night and squeezes in naps by day. And she defends him, calling him “a beacon of integrity” after the New York Times story suggested he’d had an affair with a lobbyist.

Meanwhile, the Blogette presents a slightly more relaxed Cindy McCain, revealing the slippers she once wore before going on stage and the pink polka-dotted pajamas she slipped into later that night. 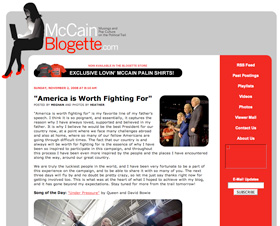 Meghan demonstrates relative comfort and occasional wit on the campaign trail, pointing out “this week’s best dressed reporter,” Henry Kissinger’s black loafers and Gov. Schwarzenegger’s ostrich cowboy boots. She discloses personal details, like her first concert (Rolling Stones) and her secret crush (Carson Daly). And she pledges to get a “Live Free or Die” tattoo if her dad wins New Hampshire and the presidential election.

It’s all a bit edgy in the most enlivening way. And it’s modernizing: A blog about the “computer illiterate” presidential candidate features an RSS feed and an e-mail subscription!

“There is probably a small set of people who find this incredibly impressive and very interesting and they really enjoy it, but they were going to vote for McCain anyway. And there’s probably a very small set of people who had their vote turned by something they saw on this blog,” Keliher said. “But in large part, it’s probably not going to have a very big impact. It strikes me as a website that was created in the era when it was simply cool to have a blog, and we are well past that phase.”

And although it’s apples to oranges, given the staggering traffic Obama nets, the Blogette’s Quantcast analytics even look good next to Obama’s in a few standards. The 18-to-34 age range, for example, accounts for 41 percent of Blogette visitors and only 32 percent of visitors to BarackObama.com. The Blogette also attracts a higher percentage of Asian visitors.

The Blogette does have its weaknesses, Keliher pointed out. One red flag is the fact that the number of people who checked out the Blogette in September (roughly 105,000) is close to the number of visitors who logged on (about 134,000) — that is, not many are faithfully checking back. Quantcast estimated that 15 percent of the Blogette visitors are regulars, while 28 percent are on her dad’s site and 33 percent on Obama’s.

A major shortcoming is the inability to click on a post and get a unique URL. “I can’t grab a link to one she wrote last night and throw it in a twitter message or an email to a friend and that really, really limits the ability to share it,” Keliher said.

Also, the Blogette is closed for comments, considered a defining characteristic of a blog. In this case, the ability to engage in (and be validated by) a back-and-forth dialogue could make the difference from a solid McCain supporter and a fired-up McCain volunteer.

Paradigm shift
In the end, the McCain Blogette offers an intimate portrait of family life on the campaign trail, which appears anything but normal. Hotel rooms and hairstylists. Makeup on the bus. Non-stop turkey sandwiches. Thunderous applause. Packing and unpacking.

The Blogette shows you the campaign through Meghan’s perspective, a mostly adult who sometimes wants to goof off or rock out, a woman who’s trying to extract a separate identity from of a tightly woven political web, who majored in art history, tried out journalism and is now flirting with fashion design.

The biography on the back jacket of her children’s book, “My Dad, John McCain,” begins, “Meghan McCain is a blogger who documents life on the campaign trail …”

She is also a daughter trying to make her parents proud, vying for their limited attention. When she received a birthday gift from her mother, Meghan seized the chance to pull up the Blogette. And though she gets periodic, well-documented hugs from Dad, there’s also a telling picture of Meghan leaping in the air, arms outstretched, eyes closed, black Sneakers airborne. Just a few feet behind her sits her dad, slouched in a chair, Razr to his ear, staring the opposite direction, in his own world.