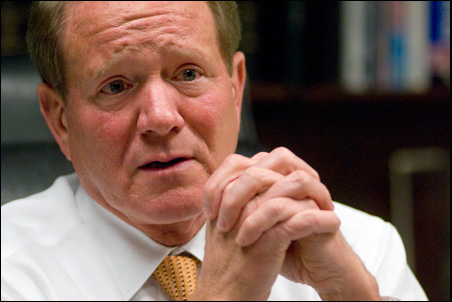 But his current job — as receiver sitting atop the $3.45 BILLION Tom Petters’ paper empire — looks to be Kelley’s biggest challenge ever.

“There have been receiverships that have lasted 14 years,” Kelley said in an interview. “This won’t last that long, but it’s going to take years, not months.”

Kelley, who always seems to be the man in the middle, was appointed as receiver over the Petters’ alleged Ponzi scheme by U.S. District Court Judge Ann Montgomery shortly after Petters was busted by the feds in late September. Petters pleaded not guilty last week to 20 federal fraud and conspiracy charges in federal court in St. Paul. Four Petters’ associates already have pleaded guilty in the case and are expected to testify against Petters when his trial begins.

Kelley describes his job as acting as the right arm of the courts. It will be Montgomery and other judges involved in the massive case who make final decisions in such things as distribution of whatever assets there are.

For example, a small Petters media company, GreatWaters Media, already has been sold for $250,000 and rights to 50 percent of the receivables owed to the company.

“Part of the deal was that 90 percent of the employees had to be retained,” said Kelley of the transaction.

On the other hand, he’s in no rush to do a deal on Sun Country Airlines, Petters’ largest legitimate holding.

“You could liquidate it tomorrow,” said Kelley, “but it doesn’t have many assets. If it can get through this quarter and has a good next quarter, maybe it’s actually worth something and it can be sold as a going concern.”

Kelley and the small army of accountants and former federal investigators he has hired will be paid from the assets that they find. He won’t say how much that payday is worth. But he does say, “We don’t want to eat up all the proceeds.”

That’s the sort of comment that is very discouraging to a long line of creditors who are owed money by Petters. At the moment Petters went down, several of those creditors from several states started filing civil suits, complicating Kelley’s already monumental task. He asked Montgomery to issue a freeze on all civil actions. She obliged, ordering that no civil cases could be filed until further notice.

That’s given Kelley some breathing room — and a chance to live an already jam-packed life.

Spending a little time with Kelley makes you feel slovenly. As fellow attorney David Lillehaug puts it: “Every time I’m around Doug, I feel like I should suck in my stomach.”

He’s an ‘activist’ running, climbing mountains, serving on boards
Kelley, 57, runs five to eight miles every day along the Mississippi, a few blocks from his downtown Minneapolis office.

His huge passion is mountain climbing. He and his 23-year-old daughter, Erin, climbed Grand Teton a few weeks ago. (When she was 12, Erin, escorted by her father, became the youngest ever to climb the Matterhorn.) He’s climbed all over the world, taking one stab at Mount Everest, before a storm forced him and his party off the north face of the mountain. He spent five days in a snow cave before reaching the summit of Gongga Shan, a 25,600-foot mountain in China. For wintertime kicks, he climbs frozen waterfalls.

To relax, he sits on the boards of the Minnesota Orchestra, Conservation Minnesota, the Trust for Public Land and the Minnesota Center for Environmental Advocacy.

In 1990, Kelley, the former chief of staff for former Sen. Dave Durenberger, threw his hat in the Republican ring for governor. He laughs, now, about how that went.

Hailed by the media as a new face in the GOP, Kelley recalled making appearances at district conventions along with Jon Grunseth, David Printy and Arne Carlson.

“I’d talk about how I’d been a prosecutor in cases involving the Mafia, [how I’d been] a Green Beret. I believed in the death penalty,” he said. “I’d get a warm response and think, ‘Gee, they like me.’  Then, the votes would go like this: Grunseth 120, Printy 100, Kelley 10 and Carlson 9.”

The social conservatives had taken over the party in Minnesota. Bright, young Doug Kelley was pro-choice, meaning he was toast.

It was Grunseth who ended up winning the endorsement and the primary. But Carlson ended up on the ballot, after the Grunseth incident — involving a nude swim with teens — surfaced. Carlson ended up defeating incumbent Rudy Perpich.

It was after that experience that Kelley said he was approached by Rick Stafford, who was chairman of the DFL at the time.

“He said, ‘Switch parties and we can make you a winner,’ ” Kelley said. “I thought about it. But I’m just not the sort of person who can switch.”

In 2000, Gov. Jesse Ventura appointed Kelley chairman of the Campaign Finance and Public Disclosure Board.

“If anything, I thought we might end up handling some sort of case involving Jesse and pro wrestling,” said Kelley.

But no. The board ended up handling a hugely publicized case involving Tim Pawlenty and his run for governor in 2000. The board found that Pawlenty’s campaign had violated Minnesota law by coordinating television commercials directly with the Republican Party and was fined a state record $600,000.

“You have to call ’em like you see ’em,” said Kelley of that decision.

For his part, Kelley believes that Pawlenty turned the negative into a positive.

“There was no evidence that Pawlenty himself was involved in the coordination,” Kelley said. “But remember what he did? He stood up and said that he was responsible for anything that happened in his campaign. He was trailing in the polls at that point, but as soon as he said he takes responsibility, his numbers went way up.”

Pawlenty went on to defeat DFLer Roger Moe and Independent candidate Tim Penny in that election.

Their first match was Durenberger versus Skip Humphrey.  Kelley 1, Lillehaug 0.

Lillehaug couldn’t prep Wellstone in the Boschwitz-Wellstone rematch because he was U.S. attorney at the time. But the two lawyers resumed their coaching competition when Norm Coleman went up against Walter Mondale, a last-moment replacement for Wellstone, who had died in a plane crash. Kelley 2, Lillehaug 1.

They were back at it again this year, with Lillehaug coaching Al Franken, and Kelley working with Coleman. To date, that’s a draw.

“Whatever it is, we seem to be on opposite sides politically,” said Lillehaug. “But I like him. He’s always been extremely courteous and he’s good at what he does.”

Kelley hasn’t totally given up the idea of someday again running for elective office.

“The stars would have to be aligned,” though, he said.

Among other things, that means that moderate Republicans would have to wrest control of the party from the social conservatives. Kelley — and a lot of others — have been unsuccessfully pushing for the return of the moderates for almost two decades.

“You say to yourself, ‘How much worse does it have to get?’ ” he said of the status of his party.

He was the lead federal prosecutor in the early 1980s case against St. Paul banker Deil Gustafson, who also owned the Tropicana night club in Las Vegas. It turned out that Gustafson had ties to Joseph Agosto, who had ties to Kansas City mobsters. Among other things, Gustafson was found guilty of illegally funneling money through Minnesota banks. Gustafson was sentenced to 10 years in prison.

In the small-world department, Kelley deposed Carl Pohlad, who owned the Marquette Bank, in an effort to get at Gustafson’s illegal banking practices. Pohlad was not a happy participant. Now, Kelley is engaged to be married to Mary Pohlad, ex-wife of Jim Pohlad, Carl’s son. At a recent event, one of Mary’s children introduced Kelley to Grandpa Carl.

“Carl was sort of huddled over,” said Kelley, “but he looked up from his chair and said, ‘I remember you.’ ”

In the early 1990s, Kelley represented the French development company La Societe Generale Immobiliere (LSGI) in a suit against the city of Minneapolis. LSGI had won the rights to do a massive redevelopment on three blocks of the Nicollet Mall but, late in the game, the city pulled out.

The suit was filled with juicy moments. At one point, for example, former Minneapolis Mayor Don Fraser was called to testify.

“Robert DeBalkeny (an LSGI representative) leaned over to me and said, ‘Douglas, I want you to squash him like a bug.’  I said, ‘How ’bout I use a scalpel and just slice off a few parts?’ ”

To the shock of many — including Fraser — LSGI won $34 million in the suit. But not long after the celebration over the mighty victory, a U.S. appeals court tossed out the verdict. Kelley still counts it as a victory.

There also have been a couple of high-profile losses. In 1996, Kelley represented DFL state Sen. Harold “Skip” Finn, who eventually was found guilty of stealing more than $1 million from the Leech Lake band of Ojibwe and sentenced to five years in prison. Three years ago, Kelley represented former DFL state Rep. Loren Jennings, who was found guilty of using his office to steer grant money to the company of a friend. Jennings is serving a four-year prison sentence.

But now he faces the biggest challenge of all, the Petters deal. When he first was appointed, Kelley said he heard there were some people who were upset.

“I understand there were people saying, ‘Why’s he in this position? He doesn’t know how to run a business,”’ Kelley said. “But you look at the situation, and a former prosecutor is as pertinent as anyone could be. You’re out there chasing around, looking for assets.”

And coming across a lot of tears in the process.

“There are a lot of tragedies in this,” Kelley said. “I ran into a friend of mine whose sister had lost $100,000 (by investing in a Petters scheme). I heard someone say this is the largest individual Ponzi scheme ever in this country, and it is filled with human tragedy.”