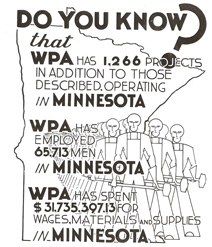 Minneapolis Public Library Archives
An illustration from a report on WPA activities between August 1935 and December 1936, issued by the Minnesota office.

The image has become part of American political iconography. It shows a man in a slouch hat leaning against his shovel. He is earning a few dollars a day during the 1930s working for the Roosevelt administration’s WPA — the Works Progress Administration.

To its conservative critics, the WPA was just another big government boondoggle. But to its supporters, this federal jobs initiative brought a modest weekly income and self-respect to millions of out-of-work Americans who were the chief victims of the Great Depression.

A centerpiece of the Roosevelt administration’s “second New Deal,’ the WPA was enacted in April 1935 as a replacement for direct federal relief — known as “the dole” — that was considered demeaning and demoralizing for its recipients.

Unlike the earlier Civil Works Administration (CWA) that funded large-scale public-works developments, the WPA was aimed at smaller-scale projects that could be implemented rapidly and put the unemployed to work at a time when the U.S. jobless rate reached 25 percent.

Dollars started flowing in 1935
WPA dollars began to reach Minnesota in late 1935, five months after the authorizing legislation was approved in Washington. During the program’s first month, in September of that year, slightly more than 4,000 Minnesotans were put to work on public improvement projects at a scattering of job sites throughout the state. Three months later, that number had shot up to more than 56,000.

During the following years, WPA employment in Minnesota would fluctuate, reflecting the ebb and flow of congressional appropriations, reaching a high point of 68,000 in September of 1938. Over the program’s eight-year life, which extended into 1943, Minnesota would receive just under $260 million to cover the wages of workers employed by a broad range of state and local government agencies.

In Minneapolis, with unemployment in some low-income neighborhoods exceeding the national rate of 25 percent, WPA brought a measure of economic stability to a city that had struggled to deal with the social fallout from the Great Depression’s early years. Only months before Franklin Roosevelt’s election in November 1932, City Hall had been the scene of angry demonstrations by desperate local residents who prodded local officials to provide $8-a-week relief grants to unemployed workers.

In this city, the Minneapolis Park Board would become a major recipient of WPA funds.

Its labor-intensive improvements at park and parkway sites provided a good fit for the federal program, with its emphasis on small-scale construction projects that could be implemented quickly and employ large numbers of the unskilled and semi-skilled men. Seventy five years later, many of these improvements are still in place at sites such as Minnehaha Park, Theodore Wirth Park and Victory Memorial Drive.

Project also funded indoor white-collar jobs
By 1942, the WPA in Minneapolis had paved 60 miles of streets, curbs and gutters; installed 64,000 traffic signs; built 313,000 feet of sewers; and reconditioned 113 public schools. In addition to these visible public-works projects, the federal program also funded indoor jobs for white-collar men and women, who were put to work indexing newspaper articles for the local libraries, organizing the Health Department’s birth records and updating the city assessor’s plat maps. More jobs were provided through the Federal One project, which funded the arts. This federal initiative supported outdoor theater performances at city parks, band concerts at Lake Harriet and an extensive educational program at the Minneapolis Art Center.

While the WPA funded a broad range of activities in this state and throughout the country during its eight-year life, the man with the shovel remains its most enduring image.

Now, in 2009, as this country faces its most severe economic crisis since the Great Depression, shovels are being rediscovered. As plans move forward in Washington for a massive economic stimulus, policymakers are calling for “shovel-ready” projects that can put people to work quickly.

During its era, the WPA did not end the Depression. But it provided jobs when there were few available in the private economy, it enhanced public services, and it helped ease the hardships faced by millions of out-of-work Americans. Today, that earlier federal stimulus provides a model that could well be replicated as this country struggles to halt its current economic meltdown.

The WPA in Minnesota: economic stimulus during the Great Depression