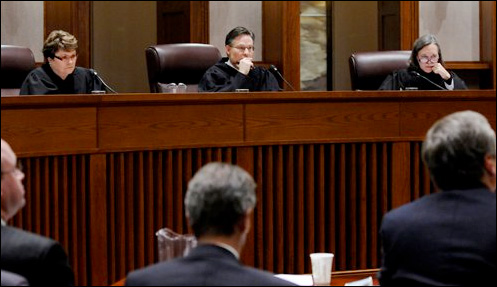 That’s where we stand as Judges Elizabeth Hayden, Kurt Marben and Denise Reilly have kept lawyers for Al Franken and Norm Coleman — and all the others who still care — waiting for rulings in the election contest trial that lasted seven weeks but ended on March 13.

Both sides expected some decisions this week, but none came.

What’s it all mean? Of course, no one knows, not even the lawyers on both sides. But in chats with people close to the case, many theories emerged, all of them speculative. So, here’s what I make of it all.

It could mean that the judges’ ruling — if, in fact, it comes early next week — could be more substantial than originally expected.

A limited interim ruling?
In conversations with lawyers during the trial, attorneys on both sides expected the judges to first declare which ballots submitted by both sides should be opened. A sort of Phase One, or interim, ruling.

The number of ballots could be as few as about 300, could migrate up to 800 and, conceivably, as many as the 1,360 that the Coleman side believes should be opened.

Let’s assume the judges — who were meticulous in earlier rulings about which ballots should be opened — are being just as meticulous with these hundreds of ballots. Remember, so far they’ve detailed exactly the reasons and lawfulness of every ballot that  they said should be counted among the so-called “Nauen 61.”

The Nauen group, represented by Minneapolis lawyer Charles Nauen, was made up of Franken-leaning voters who petitioned the court to have their previously rejected absentee ballots counted.

If Hayden, Marben and Reilly have been examining hundreds of ballots and deciding which ones are lawful and then reducing to an order the specific reasons each ballot should be opened, that would take a ton of time. Again, Coleman’s side asked them to evaluate 1,360 ballots.

The judges could be going through the thousands of pages of trial transcript and thousands of exhibits and determining for themselves which ballots to open. They might not be relying on the spreadsheets of the Franken and Coleman legal teams. That would take even more time.

Maybe a bigger ruling?
The wait could mean that any decision announced next week — or later — will be substantially closer to a final ruling than originally expected.

There was a belief that the ballot-counting ruling would come first, and only then a fuller ruling on fact-finding and legal issues.

But maybe we’ll see not only the ballot-counting decision, but a fuller ruling on such key matters as the 132 missing ballots in Minneapolis (and other missing ballots), the alleged double-counting of ballots and Coleman’s constitutional “equal protection” and “due process” assertions.

That latter piece of work — the constitutional issues — could require them to carefully review the entire seven-week-long trial transcript; thousands of pages. They would need to carefully review Coleman lawyer Joe Friedberg’s closing argument, which was a full frontal assault on the “equal protection” issue and the inconsistencies of how votes were accepted and counted from county to county.

The judges, throughout the trial, dismissed Coleman’s “equal protection” assertions, but they could be trying to thread a legal needle on the constitutional issues so they’re not over turned on an appeal. Perhaps it’s taking them a while to thoughtfully construct their opinion on this issue that’s so dear to Coleman’s case.

Saving some decisions?
There was some feeling that the judges would keep some decisions in their back pockets for a final ruling. Take the missing 132 ballots from Minneapolis.

Perhaps — some felt — the judges would order the previously rejected absentee ballots counted. Then, once they saw Franken’s margin, they could conveniently eliminate the missing 132. In that set, Franken holds a 46-vote margin. In the end, those 46 Franken votes might not affect the total count.

If the judges rejected including the 132 missing votes in the overall count, it would make them appear to be giving Coleman a victory on that issue while removing an appeal-able issue for Coleman to take to a higher court.

But, during the trial, Hayden, Marben and Reilly didn’t show such cagey tendencies. None at all. Perhaps they’re writing a full opinion on all matters … with the exception of ordering the counting of the remaining ballots.

Straightforward as they’ve been so far, the judges don’t want to appear as if they’re in the business of waiting to see how the additional votes play out. They’ll decide all the key legal issues, say, “Open the ballots,” and let the votes fall where they may.

Maybe a mega-ruling?
The judges could be deciding the whole matter in one fell swoop. No interim ruling. Just one mother of all rulings.

Remember, Franken’s side in its final “findings of fact” and earlier motions to dismiss claimed Coleman doesn’t have enough votes out there to overcome Franken’s 225-vote lead.

Could it be that the judges won’t order the count of any ballots at all?

Have they been working instead on a bombshell of a decision that simply says: “Coleman didn’t prove his case. We cannot overturn the decision of the State Canvassing Board. There were some goofy issues in this case, and we’re going to tell the U.S. Senate about them. But Franken gets the election certificate. Case closed.”

That seems unlikely. First of all, they’ve already ordered the opening of about 47 ballots in earlier rulings. They couldn’t rescind that.

Secondly, the politics of not opening any additional ballots would be viewed as intolerable … even if opening them wouldn’t allow Coleman to overcome Franken’s lead.

We all know there are votes out there that should be counted. For the judges to determine — after seven weeks of trial — that none should be opened would be politically explosive.

Maybe judges can’t agree?
Could the delay be a result of the judges disagreeing?

Every ruling from Hayden, Marben and Reilly has been unanimous … so far. Might they be splitting on these final major decisions? Unlikely, very unlikely, based on how they’ve ruled before, but who knows?

Do they want a 2-1 decision here? Do they want to give the Minnesota Supreme Court a reason to overturn their work after seven weeks of arduous litigation?

Let’s be clear: This is complex stuff. In a civil case of this magnitude, in many courts a ruling wouldn’t be expected for months at a time. We who operate on two-hour news cycles and Twitter have lost our ability to be patient. A two-week lull in such a major case shouldn’t be viewed as long … even if it means delaying the swearing-in of Minnesota’s second senator.

Whatever is announced next week — and something’s gotta happen next week, right, Your Honors? — it could take up to four days for the ballots from the counties to arrive in St. Paul and then be counted by staff members of the secretary of state’s office.

(By the way, the judges need to rule on the exact procedures for such counting. Will the campaigns be allowed to challenge ballots again for voter intent? Presumably.)

So, no matter when their first ruling comes, we’d be a week away from a final recount of previously rejected absentee ballots.

Then, depending on the finality of any interim decision that’s come forward, the judges would have to make a final declaration of which candidate should be awarded the election certificate. After that, Secretary of State Mark Ritchie and Gov. Tim Pawlenty have to sign the piece of paper.

Will Pawlenty sign it — will Ritchie sign it — even if Coleman appeals to the Minnesota Supreme Court? (Which is very likely.) Will Coleman’s lawyers run to U.S. District Court on some constitutional matters, depending on the judges’ ruling?

We’ll have to wait … just as we’ve been waiting since March 13, when the closing arguments were made and the fastidious judges took this matter under advisement.

Coleman-Franken recount trial: The wait continues … What’s it mean? Why is it taking so long?