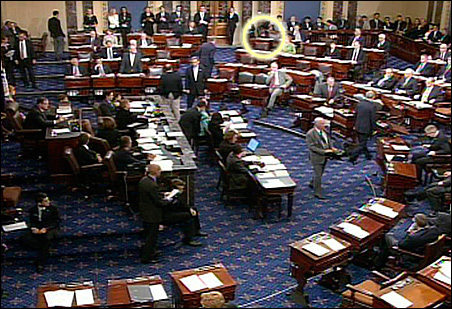 WASHINGTON, D.C. — Every day that the U.S. Senate convenes, a page scurries onto the floor and readies desk No. 84 with the necessary materials: a Congressional Record of the previous day’s actions, any bills or amendments to be debated and voted on, and a couple of sharpened No. 2 pencils just for good measure.

Although all 100 desks are prepped in the exact same fashion when the Senate is in session, No. 84 is different.

It sits, indistinguishable from its neighbors, at the end of a row of desks in the back of the Senate chamber. But during the days, weeks and now months since the new session began — throughout the morning meetings, midday debates and late night votes — its chair has remained squarely tucked under its desktop. Its paperwork has lain untouched, stacked in an orderly fashion behind a gold metal plate that bares this name, etched in a cursive font: Norm Coleman.

It has been about 155 days since the former Republican senator from Minnesota was declared the winner of his race for re-election against Democratic challenger Al Franken, and about 95 days since the state canvassing board overturned those results, declaring Franken the winner by 225 votes.

In all that time, No. 84 has waited on the Senate floor — an open seat, an empty desk.

Missing neighbor
Not that it has been that noticeable to the throngs of tourists who peer down onto the Senate every day, or even to the senators themselves.

Sen. Roger F. Wicker from Mississippi, who now sits next to No. 84, appeared slightly bewildered, yet amused, when asked what it was like to be short a neighbor this session.

“It is really not much of an issue,” the Republican said in between a series of votes on the budget last week. “If you notice, the senators usually come down to the front to vote and leave to talk to other people. I very seldom sit at my desk. Senator Brownback is on the other side and I seldom see him either.” 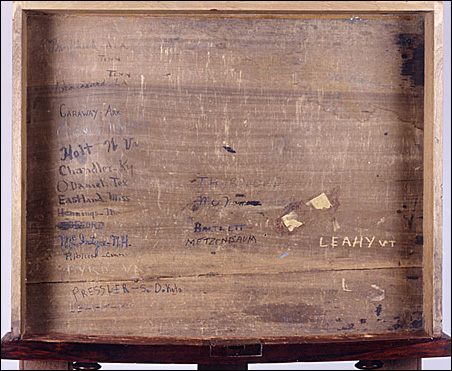 U.S. Senate
The drawer bottom of desk No. 84 with names of senators who sat at the desk over the years.

“We just amble around the whole floor and sit in other people’s desks all the time,” DeMint said. “It is on very rare occasions that we all sit in our desks.”

Which is not to say that the Republicans don’t notice Coleman’s absence. They do.

But to a certain extent, the Senate desks, and the positioning of senators on the floor, are continually in flux.

When the Democrats picked up five spots last November, desks were moved accordingly from the Republican side to the Democratic side of the Senate floor. Each session, senators are also allowed to choose to remain in their desks or switch desks, positions, or both, based on seniority.

Still, the Senate desks are also among the few real constants in a room where the occupants inevitably change completely over time.

Thus, for many senators, a desk is often more than just a desk, carrying historical and sentimental significance beyond the utilitarian role it serves.

“There are desks here with a lot of history, so of course it is important,” said Wicker.

As the story goes, Union Army soldiers descended on the desk with bayonets during the Civil War, calling Jefferson a “damn traitor,” but were prevented from destroying it by a Senate employee who insisted that it was the property of the government and did not belong to Davis. 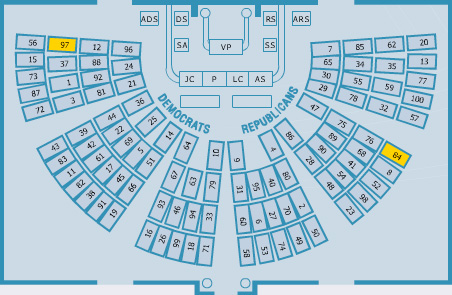 Meanwhile, Sen. Ted Kennedy of Massachusetts sits at the same desk that his brother, President John F. Kennedy, sat in when he was a senator.

And, what about Minnesota’s lone senator, Democrat Amy Klobuchar?

There “is a sense of history that you think about,” said Klobuchar on picking her desk. “All these people that were there before, and the speeches that they gave. It’s just a little tradition that we pass on these desks.”

When a desk changes hands it is also tradition for a senator to carve his or her name in the desk drawer. In fact, the cloakrooms off the Senate floor have carving tools for this very purpose. 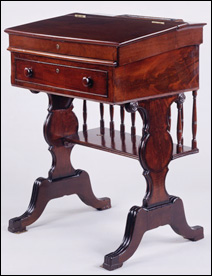 A desk that both Hubert and Muriel Humphrey used carries this inscription: M + H Humphrey.

Coleman, however, was the first Minnesotan lawmaker to sit at No. 84, which was occupied by a long run of Democrats before heading over into Republican territory.

Hidden history
As of Wednesday, it wasn’t clear whether Coleman had carved his name into either of his desks.

According to Senate rules, however, he can still engrave his name even if he ultimately loses the Senate race.

When former Sen. Craig Thomas of Wyoming died while serving in office, for example, his wife was allowed on the Senate floor to carve his name into his old desk.

But to the casual Senate visitor, the long history of these desks remains mostly hidden from view, literally tucked away in a drawer. 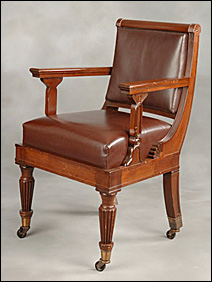 On Tuesday, Franken’s lead expanded to 312 votes over Coleman, who has promised to appeal the case to the Minnesota State Supreme Court.

And as the legal fight draws out, desk No. 84 is getting closer to adding to its already lengthy history by becoming the longest unoccupied desk in the Senate.

Not that you would be able to tell from looking. Each day, a page brings out the standard set of materials, and later each day a page clears No. 84 off along with all the other desks.

Although seemingly meaningless and mundane, this ceremony has great meaning within the confines of Senate tradition — a tradition that often ignores the messy reality of elections and doesn’t make an exception for an empty desk.

To read more about the desks in the Senate chamber, go here.

Desk No. 84: Minnesota’s desk on the Senate floor is ready, waiting and empty