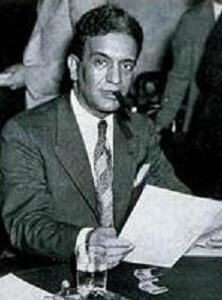 “House Speaker Nancy Pelosi plans to push for a comprehensive inquiry, saying that three-quarters of Americans want to know what led to the bankruptcy of Lehman Brothers Holdings Inc. and the collapse of Bear Stearns Cos. and Merrill Lynch & Co. She favors one patterned after Senate Banking Committee hearings led by Ferdinand Pecora starting in 1933, according to her spokesman, Nadeam Elshami.

“The Pecora review ‘was probably the single most important congressional investigation in the history of our country, except perhaps the Watergate hearings,’ Donald Ritchie, associate historian for the U.S. Senate, said in an interview.”

“Under Pecora’s expert and often withering questioning, the Senate committee unearthed a secret financial history of the 1920s, demystifying the assorted frauds, scams and abuses that culminated in the 1929 crash.

“The riveting confrontation between Pecora and the Wall Street grandees was so theatrically apt it might have been concocted by Hollywood. The combative Pecora was the perfect foil to the posh bankers who paraded before the microphones. Born in Sicily, the son of an immigrant cobbler, Pecora had campaigned for Teddy Roosevelt and been imbued with the crusading fervor of the Progressive Era. As a prosecutor in the 1920s, he had shut down more than 100 “bucket shops” — seamy, fly-by-night brokerage houses — and this had tutored him in the shady side of Wall Street.”

–Ron Chernow, “Where is our Ferdinand Pecora?” [January ’09]

“Retail sales fell in March as fearsome job losses and tighter credit conditions forced consumers to cut back sharply on discretionary spending. Nearly every sector is seeing declines including electronics, restaurants, furniture, sporting goods and building materials. Auto sales continue their nosedive despite aggressive promotions on new vehicles and $13 billion of aid from the federal government.

“The crash in housing, which began in July 2006, accelerated on the downside in March, falling 19 per cent year-over-year, signaling more pain ahead. Mortgage defaults are rising and foreclosures in 2009 are estimated to be in the 2.1 million range, an uptick of 400,000 from 2008. Consumer spending is down, housing is in a shambles, and industrial output dropped at an annual rate of 20 per cent, the largest quarterly decrease since VE Day. The system-wide contraction continues, with no sign of letting up.”

–Mike Whitney, “A bulletin from the captain of the Titanic”

“A report by the TARP watchdog said the Treasury should take steps to better manage its financial-rescue effort so that taxpayer dollars are safeguarded and programs are more fraud-resistant, accountable and transparent….

“Addressing one of the Treasury’s newest efforts, the watchdog said fund managers that participate in the Treasury’s program to address toxic assets, the Public-Private Investment Program, could take advantage of the program at taxpayers’ expense.

“‘The significant Government-financed leverage presents a great incentive for collusion between the buyer and seller of the asset, or the buyer and other buyers, whereby, once again, the taxpayer takes a significant loss while others profit,’ the office said in its quarterly report to Congress.”

“With equity investments in new companies drying up, venture capitalists and angel investors are pushing the federal government to give them financial relief and access to small-business programs traditionally reserved for noninvestor-backed businesses….

“But some businesses that traditionally have been served by Small Business Administration programs and loans fear that providing more government aid to equity-backed companies will divert attention from those that really need help.”