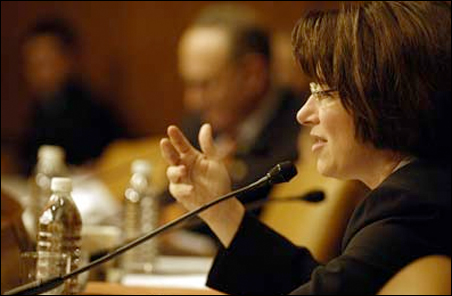 WASHINGTON, D.C. — As Congress marches toward summer, Amy Klobuchar’s unenviable position as Minnesota’s only senator — a role that has required additional resources and energy — has also come with a silver lining: loads of ongoing sympathetic media coverage and a growing national reputation as a hard-working lawmaker who doesn’t complain, according to Democratic and Republican strategists and political analysts.

As the Coleman-Franken election dispute grinds on, “valentine” copy (as Jacobs calls it) has poured out of news organizations from the Minneapolis Star Tribune to The Associated Press to The New York Times.

The coverage, of course, has not focused exclusively on Klobuchar’s sole-senator status, but it has provided an underlying narrative.

When Klobuchar appeared on MSNBC’s “The Rachel Maddow Show” in February, for instance, the first question Maddow asked was if Klobuchar’s “staff actually [has] tons more work to do because you are Minnesota’s only senator?”

Klobuchar appearing on “The Rachel Maddow Show” on Feb. 16.

MinnPost.com, and this reporter, have also referred on more than one occasion (see first sentence of this article) to the increased workload that the state’s lone senator has had to shoulder.

This is not to say that Klobuchar’s position is not worth noting or that the amount of work she now has to tackle has been overstated. Klobuchar has previously reported that her casework has doubled and that her office is getting five times the calls that it typically receives — an increase that the senator has said required the recent installation of a new phone system.

The point is more that from a political strategist’s perspective, the situation has provided her with a national stage to showcase her work ethic, humor and equanimity.

“This has been an enormous burden on her staff,” said Norm Ornstein, a congressional scholar at the conservative-leaning American Enterprise Institute. “[But] it has put her even more in the spotlight than she would have been otherwise.”

And Klobuchar, for her part, has ridden the media wave like a pro, according to those on both sides of the aisle.

Former Republican Sen. Norm Coleman agrees. “I have always appreciated the efforts of Senator Klobuchar to reach across the aisle to meet the needs of Minnesotans,” Coleman told MinnPost via email Tuesday. “I also appreciate that she has respected my desire to enfranchise more than 4,400 Minnesotans who have not had their voices heard or had their votes counted in spite of the additional burdens on her and her office.”

Democrat Al Franken also lauded Klobuchar’s efforts. “No one is better prepared to do double duty than Amy Klobuchar,” Franken told Minnpost via email on Tuesday. “Amy is one of the hardest workers I have ever met, and Minnesotans know that she’s been working overtime for them for the last five months.”

‘Klobuchar brand’
Still, there are some in the Democratic Party who feel that Klobuchar could have been a little more publically aggressive along the way in trying to get Democrat Al Franken into the Senate, according to a Democratic leadership aide who asked not to be named in order to speak candidly.

“She is so protective of the Klobuchar brand,” the aide said. “She is clearly at a point where she has decided that she doesn’t want to spend a lot of political capital on this, which is fine because there have been moments where she has stepped up to the plate. But, given her position and that her approval ratings are so high, she could have spent a little more capital than she has.”

Indeed, Klobuchar enjoys one of the highest approval ratings in the Senate. In March, the polling organization SurveyUSA found that Klobuchar had the fourth highest rating of the 27 senators that it tracks. 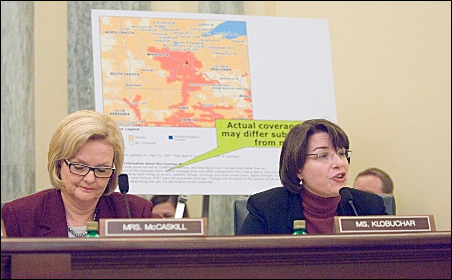 But if the polls are any indication, Klobuchar has been smart in her measured approach to the Franken/Coleman situation, according to an analysis by Eric Ostermeier, a political expert at the University of Minnesota’s Humphrey Institute of Public Affairs.

“Klobuchar has perhaps enjoyed greater success statewide in maintaining her support than some of her colleagues, particularly among independents, by seeming comparatively non-political in contrast to her past and (probable) future Gopher State colleagues, Norm Coleman and Al Franken,” Ostermeier wrote last month on his blog Smart Politics. “As Coleman and Franken fought through a brutal (and lengthy) 2008 U.S. Senate election, recount, and trial, Klobuchar has largely appeared above the fray and with her nose to the grindstone.”

Since joining the Senate, Klobuchar’s national image has also benefited from key committee appointments. And being an early supporter of President Barack Obama hasn’t hurt. In fact, rarely does a news article go by that doesn’t mention her combination of wit and composure and her potential to be a leader in the Democratic Party.

“Even if none of this had happened, you would still be getting a buzz about Amy as a rising star,” said Ornstein.

Or as Kathryn Pearson, a congressional expert at the University of Minnesota, put it: “Just because you are a single senator representing one state, that isn’t enough to make you a rising star. But she had already laid the groundwork in the last two years. So this has just helped, to some degree, to accelerate the process.”

But, given the choice, Klobuchar said she would gladly take a partner in the Senate this summer over more media buzz about going it alone.

“It has brought more attention,” Klobuchar acknowledged. “But, I would still rather that we have two senators.”