Editor’s note: This is the first in a series of occasional Q&A’s with thought leaders on their best hopes and worst fears for health reform.

HealthPartners CEO Mary Brainerd would like to see universal health coverage in the United States but worries how the nation will pay for it.

Brainerd, who joined HealthPartners in 1992, oversees a 52-year-old nonprofit system that insures 1.25 million patients nationwide. Bloomington-based HealthPartners operates about 70 clinics as well as St. Paul’s Regions Hospital, one of two safety-net hospitals in the Twin Cities (Hennepin County Medical Center is the other one).

While national reform offers the potential of universal care, state reform seems to be sliding backward with cutbacks to public aid programs, Brainerd says. Minnesota has been a standout with one of the lowest uninsured rates in the nation because of its public aid programs.

“I’d say we’re not moving from just the top five or six — we’re moving to a position in the bottom half” of the nation, Brainerd says in a Q&A with MinnPost. Here are her thoughts about health reform.

MinnPost: What are your best hopes and worst fears for health care reform at both the national and state levels?

Mary Brainerd: My best hope would certainly be that we have coverage for anyone and through that make sure everyone had access to our health-care system. A second would be that we would be able to have more affordable health care and third would be that as we look at health care reform that we change the way we pay for it. … Under the umbrella that we want better health for people in our country, we don’t measure up as well as we might against health-care outcomes in some other parts of the world and other places. So, that’s the ultimate aim: better health and more accessible, affordable health care.

MB: My worst fears are that we will extend access without figuring out how to make health care more affordable and that it will lead to an unsustainable system. The second is the specific concern for Minnesota that some of the current inequities in the Medicare [federal coverage for age 65-plus] payment system will get baked into health-care reform, and that’s a bad deal for Minnesotans.

MP: Can you be more specific? 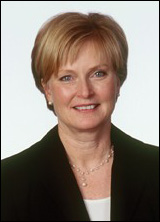 MB: Sure. Medicare currently pays dramatically less for care in Minnesota than it does in some other parts of the country. Our current private financing system subsidizes those low Medicare payment rates. So, continuing to build on the Medicare payment rate and on the Medicare fee-for-service system, which incents volume and procedures, are two things that are broken from our perspective.

MP: How has your thinking changed about reform during your career in health insurance and since health reform rose to the top of the domestic agenda?

Something that I wouldn’t have known as much about, or had as many concerns about, is health disparities. We clearly have lots of disparities based on race and ethnicity and the ability to speak English, which result in poor health outcomes within the health care system.

I’m much more clear than I used to be about the fact that health care and health are not the same thing and that, in fact, health has a lot to do with what your socioeconomic status is: how healthy and livable your community is, what your environmental surroundings are like — and that a lot of those are connected, including even educational status, as determinants of health.

I think I have a real clear awareness, in part because of Regions Hospital being part of our system, how differently we treat mental illness care than we do more traditional physical illness care and the challenges in that area.

I think mental illness is still a set of health conditions and diseases that have a lot of stigma associated with them, where the investment of community resources is not as good as it needs to be. I think that lack of investment, and the fact that payment for health services is still so low, is a manifestation of the stigma associated with that disease. We don’t value it, so therefore we don’t support the care organizations and the providers who deliver the care to people who have mental illness.

We clearly are using a model that says, “We’ll provide care when you are in crisis but we are not going to figure out how to support you in a healthy and stable living situation.”

MP: HealthPartners came out with a strong statement against Gov. Tim Pawlenty’s line-item veto of General Assistance Medical Care for childless adults. We’re one of six states providing such public health care for these adults. Between the legislative cuts and this veto, do you think Minnesota’s health care safety net is being dismantled?

MB: I think the elimination of General Assistance is a big step backwards and it will affect everyone because our safety net organizations are the most dramatically affected by the cuts. A large percentage of our patients in our mental health facility at Regions are on General Assistance. When that program goes [GAMC is scheduled for elimination in 2010], they no longer have coverage. Those individuals will only be able to enter the health-care system through the safety net and the crisis system we have today, which is the emergency room. And that’s not an optimal way, not even an adequate way, to get care for chronic mental illness. It’s also a very expensive way to deliver care.

You’re using the example of six states in the country that offer programs [for childless adults]. But another 18 to 20 states have a program that specifically supports their safety-net facilities. They don’t provide coverage to individuals. I frankly think it’s very important to provide coverage to individuals so they can access care in the community at the clinic level — not just through the hospital. Another 18 to 20 states have made the decision that they at least need to provide special support for their safety-net facilities because of the challenges of caring for the uninsured. And we haven’t done that. So I’d say we’re not moving from just the top five or six — we’re moving to a position in the bottom half.

MP: There seems to be broad consensus that universal coverage is needed, but broad disagreement over how to achieve it. Why is the health insurance industry opposed to a public option when our nation already has taxpayer-funded programs like Medicaid, Medicare and other entities or exchanges to cover the military and federal employees?

MB: I think that the discussion is how broad a role do you want the government to play? There are folks on the side of that discussion who say they’d like a single-payer system only, which is a move to government-only, although frankly that’s not even the case for Medicare. Most Medicare folks have a HealthPartners card or a Blue Cross card or a UnitedHealth Care or an AARP card. The same holds true for people in the Medicaid program. I think, in general, people are saying, “We want more choices than only a government plan.”

So, on the continuum of a completely private or a completely public system, where will reform land? My concern for Minnesota, again, is that Medicare, if a public plan is based on Medicare payment rates, those rates are so low in our state that the private payers — that means individuals and businesses — are paying higher rates to cover that cost. And that means private plans wouldn’t be able to compete with a Medicare [type plan].

We all want lower health-care costs but that kind of shift wouldn’t just affect the health plans, it would affect our delivery systems very dramatically. I think our congressional delegation gets this point. I know some of them would love to see a public plan but I know they’re very concerned that our delivery systems, our hospitals and our medical groups in Minnesota and some other states can’t make it on the very low Medicare payment rate.

So, expanding use of that Medicare fee-for-payment approach in our state and others like us is a big issue. It would be a different discussion if we were New York or Florida or California. Then you’d be debating the topic on a different set of criteria. But in Minnesota, we can’t make it on a 34-dollar fee-for-service payment rate that Medicare pays here.

MP: What could the nation learn from Minnesota’s track record in health care and the fact that it has one of the lowest uninsured rates in the nation?

MB: I actually think the best things to learn from Minnesota are that we have had a focus on quality care. We’ve done a lot in this state to promote best practices and use the scientific evidence to deliver care. We have a good history of collaboration including things like quality reporting in which Minnesota is a national leader. We’ve had more organized systems of care instead of really fragmented care organizations and we have good health care outcomes to show for it. So, if you look at health care quality in Minnesota, we’re way up at the top and we tend to do that in a little bit less expensive way.

I’d say what Minnesota demonstrates, in terms of having a low percentage of uninsured, is when you have more affordable health care, it pays off. A larger percentage of small businesses in Minnesota offer more coverage than in other states and I think that’s because historically we’ve been a place where health care — although it is increasingly unaffordable here — has been an asset compared to some other states.

The other thing is we’ve put together a sort of patchwork quilt of programs to keep people covered. But having that done at the state level is a challenge, and that’s where I think there’s some opportunity for federal reform to be effective. We have this high percentage of small businesses offering coverage. We’ve had pretty good rules of the road for insurance coverage behavior. … We’ve had a plan (Minnesota Comprehensive Health Association) for people who have pre-existing health conditions. We’ve had MinnesotaCare, and we’ve had the General Assistance program. So, we’ve put all that together and knitted it in a way that we’ve ended up with a high percentage of the population that has coverage. Looking at that you can see how it might be used nationally to create insurance reform and coverage for all.

MP: Could you comment about the nonprofit requirements in the state? Could that work nationally?

MP: Anything else you’d like to say that I haven’t asked you?

MB: I think there is still great potential in improving health and not just looking at it as a medical system. We know that about 25 percent of health-care costs are actually associated with conditions that are determined by your own health behaviors: whether you smoke, whether you’re physically active, how well you eat. I believe one of the things, not the only thing, to help make health care more affordable is to help make our lives healthier. And that doesn’t happen in hospitals; that happens in schools and parks and the way we structure our cities. I think there is work to be done there.

Casey Selix, a news editor and staff writer for MinnPost.com, can be reached at cselix [at] minnpost [dot] com.

Pawlenty and Gingrich on health reform and Henry Ford by Casey Selix, July 15, 2009