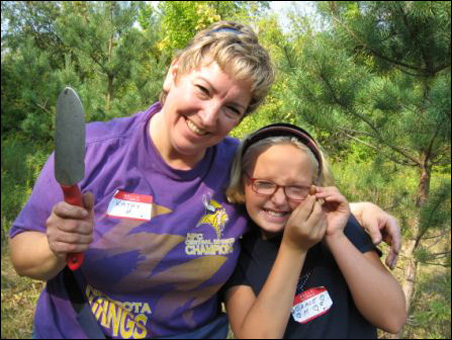 This is about some tiny acorns — lots and lots of them — that are making a big difference for some local kids. They’re learning about science and ecology while helping repopulate some area forests with new stands of oak.

They’re participating in the Million Acorn Challenge, put on by Great River Greening.

Now in the final year, they expect to meet their goal Saturday, when they gather for a weigh-in and planting at Afton State Park.

The teams — from schools, churches, scout groups and other associations — are also competing for prizes: $500 to the team with the most acorns and $500 for the most per team member.

(No, they don’t have to count them, one by one. Great River Greening official Mark Turbak said they’ve got a formula for weighing the acorns, which teams accumulate in 50-pound seed bags. It’s about 300 acorns to the pound.)

In their fledgling attempt in 2007, about 92,000 acorns were collected and planted in a Como Park woodland area that had lost many trees in a storm that summer.

Last year, they moved to Afton State Park, in Washington County on the St. Croix River. Twenty-two groups competed and came up with 380,000 acorns. The groups then helped plant acorns in some areas of the park as part of an 85-acre restoration project. Officials hope to return that area to its earlier glory as an oak forest.

This year, they’ve got about 20 teams competing with each other — and squirrels — for acorns. And the hope is to harvest at least 525,000, to meet the 1 million-acorn goal.

“This isn’t just about acorns,” said Robert Viking, Great River Greening’s director of marketing and development. “We see the broader issues of the environment, and how we interact with the environment and important goals, too. The education piece is vital.”

Teams do need a permit for collecting acorns on public land, and a letter from private land owners, but Great River Greening walks them through the process in the challenge instruction materials.

After Saturday’s weigh-in, some of the youth groups will hike about 30 minutes to plant acorns in some hard-to-get to places.  Most of the acorns will be planted with machinery by DNR and Great River Greening crews.

And extra acorns that aren’t needed in Afton will be planted in Scott and Isanti Counties, Viking said.

Of course, not every acorn in the ground will turn into a towering oak tree. Viking said that although most of the plantings will develop into seedlings, only one or two per hundred acorns will grow to maturity. Most will be eaten by deer or rodents or other wildlife.

But organizers urge the young volunteers to come back to the park in 20 years to see the established oak trees, and then tell people how it happened.

Greening History
Great River Greening started in St. Paul in the early 1990s, with the original charge of planting native species and improving the Mississippi River banks, from the High Bridge downstream to Holman Field, on both sides of the river from bluff to bluff.  The goals were to restore ecological function to this part of the river valley, to create attractive green space on the river near downtown Saint Paul and to involve citizens in planting efforts.

The first project came in April 1995, when 175 volunteers planted hundreds of trees and shrubs at the entrance to Harriet Island. The group’s records show that by the end of last year, 21,334 volunteers had planted 58,161 trees and shrubs. That doesn’t count the acorns, obviously.

The group’s geographic focus has widened, and it now takes on restoration projects in many parts of the state.

More work with teens
A new offshoot for the group has put Great River Greening workers into metro-area classrooms to work with minority youth on environmental projects. They speak first with students at their schools, then take them to wild areas to observe and work a bit, maybe pulling up buckthorn or sumac, to make way for other native plants. They follow up again in the classroom to solidify the lessons learned.

This “Natural Areas Teen Network” also lets kids consider natural-resource career possibilities by bringing in minority role models who work in the field and explain more about the jobs and what it takes to get them.

This fall, they’ll work with students at Como Park and Harding high schools, the Community Design Center and River’s Edge Academy. In the spring, they’ll go to Humboldt High School and Upward Bound.