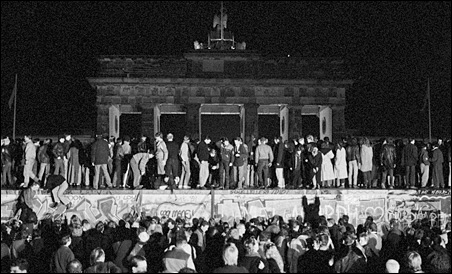 REUTERS
East and West German citizens celebrated as they climbed the Berlin Wall at the Brandenburg Gate after the opening of the East German border was announced in Berlin on Nov. 9, 1989.

As we approach Monday’s 20th anniversary of the opening of the Berlin Wall, hindsight has made the event one of history’s most powerful metaphors, symbolizing the collapse of one East European Communist regime after another and culminating in the break-up of the Soviet Union in 1991.

A cottage industry in the form of memoirs of the participants and the indiscrete release of tantalizing tidbits of information by former agents of the Soviet KGB and the East German Stasi has taught us to be a skeptical of all the competing claims by the survivors and the political descendants of the old Cold War warriors. They are too quick to claim in the miracles of 1989 a sanction for their politics then and now.

Before the politicians and pundits wrap themselves in the mantle of the heroes of 1989, I would suggest we YouTube and revisit a mostly forgotten bit player in the story. A routine apparatchik of the East German Communist Party, Gunter Schabowski appeared on television (below) in a press conference Nov 9.  Asked by a reporter when East Germans would be able to travel freely across the wall separating the two Berlins, Schabowski blurted out, “Immediately, right now.”

The venerable apparatchik, of course, did not mean it. He assumed that East Germans, like the people throughout the East European Communist world, would react to his remarks the way they always reacted to the party’s pronouncements. Whatever the apparatchik says, the truth must be the opposite. It never crossed the old Communist mind that the next day East Germans would do exactly what he said.

The Schabowski factor is my metaphor for politicians and the end of the Cold War. Schabowski did not understand the situation, did not know what he was saying, and had no idea of how people would react.

Reagan and the Cold War
Republicans are less modest in their claims for a hold on the events. They are already attacking President Obama for not attending the ceremonies planned in Berlin next week to mark the twentieth anniversary. The speeches are already written on how Reagan’s June 12, 1989, address (below) in Berlin — “Mr. Gorbachev, tear down this wall!” — was the battle cry that won the Cold War.

The conservatives’ argue that Reagan won by calling an evil empire by its real name and forcing it into an arms race it could not win. Even we old DFLers out here in Minnesota, who spent much of the 1980s licking our wounds after Walter Mondale’s defeat, have to admit that Reagan deserves some credit.

However, the credit belongs to the late Reagan, not the early Reagan. In the later years of his second administration, Reagan abandoned the politics of confrontation and engaged Mikhail Gorbachev in summit diplomacy that produced the INF Treaty and the beginning of the end of the nuclear arms race. Conservatives were not pleased, branding Reagan a latter-day Neville Chamberlain. In 1987, then-Rep. Dick Cheney led the charge, reminding Reagan that Gorbachev was “an adversary, not an ally.”

Incidentally, Reagan’s British ally on the right, Margaret Thatcher, dragged her feet in the conservative march to victory in the Cold War. Recently released sources from Britain and the Kremlin have disclosed that at a meeting with Gorbachev in September 1989, Thatcher advised him to pay no attention to what she might say in public. Britain, she assured him, did not support the unification of Germany.

Gorbachev takes credit
The last president of the Soviet Union, Gorbachev for a long time now has pushed his way to the front of the line of those claiming to have won the Cold War. First of all, he has discretely pushed Reagan off the pedestal. He has given the media a few anecdotes from his meetings with Reagan suggesting the great communicator was a bit short in his critical thinking skills or harboring a few delusions. Last July in MinnPost, I shared with you my favorite of these Gorbachev revelations. On the “Charlie Rose Show,” Reagan had asked Gorbachev is the Soviet Union would come to the aid of the United States if we were attacked by extraterrestrials.

Secondly, Gorbachev gives himself the lion’s share of credit for making the tough decisions of the time. In the early months of 1989, Gorbachev told the Polish Prime Minister General Jaruzelski that the Soviet Union would no longer prop up the Polish Communist regime with military support, martial law was no longer an option, and Moscow’s Polish comrades would have to find a way to live with the democratic opposition. When in the summer of 1989 the Hungarians informed Gorbachev that they intended to open the Iron Curtain on their border with Austria, he did not object. Later, he pushed East Germany’s Erich Honecker either to emulate Gorbachev’s model of reforms or step aside.

Recently, Gorbachev raised the ante, taking credit not merely for the peaceful end to the Cold War but also for preventing the conflict’s long-feared outcome in nuclear war. “If the Soviet Union had wished,” Gorbachev told a press conference on Nov. 5, “there would have been nothing, no fall of the Berlin Wall and no German unification. But what would have happened? A catastrophe or World War III.”

If Gorbachev is serious on this point, however, you can’t help but wonder just what he has meant when, in recent private conversations, he has been quoted as saying that, if he had the chance to do the German crisis over again, he would act far, far differently.

The truth was that Gorbachev beat a forced retreat from Eastern Europe and a hunkered down for a last ditch effort to preserve the Soviet Union. On the day the Berlin Wall came down, Nov. 9, 1989, Gorbachev met with the Communist leadership — the Politburo — to discuss the emerging threat of secessionist movements in the Baltic states and Ukraine. Moscow had given up on Germany. It was not even on the agenda. As the British historian Timothy Garton Ash puts it, Gorbachev was at best “a hero of retreat.”

George H. W. Bush’s role
One person gets far too little credit. Like Gorbachev, Bush 41, was a hero for what he did not do. On his watch, George H. W. Bush presided over the miraculous end of Communism in Eastern Europe in the fall of 1989 and then the soft-landing of the Soviet Union in December 1991.

His policy combined a skepticism that perhaps the Russian bear was waiting to attack with a hands-off laissez-faire approach that wanted neither to provoke the Russians nor to add too much fuel to the revolutionary fires in Eastern Europe. His reactions betrayed an instinctive, gut conservatism.

In early 1989, when he met Poland’s Gen. Jaruzelski, the architect of Poland’s martial law from 1981 to 1985, Bush pronounced him a “force for stability” and “a real class act.” He subsequently met Jaruzelski’s nemesis and the founder of Polish Solidarity, Lech Walesa, and Bush found him unstable. In Budapest, 41 was more comfortable in conversations with the new reform minded, tony Communists in office than with the opposition leaders from the streets.

The dean of Hungarian dissent, the philosopher Janos Kis, impressed 41 as a scraggly radical. As for the Hungarian opposition, Bush told his aides, “These really aren’t the right guys to be running the place.”

Bush 41 was that very rare leader in world history who turned wrong opinions about the political players and misinformation about the events into the right policy for the time. Although they weren’t his kind of guys, 41 enabled the right guys to run the place.

The pope and Poland
The Poles throw their support behind Karol Wojtyla, who in October 1978 became Pope John Paul II, as the man who deserves credit for ending the Cold War.

One Minnesotan strongly agrees. A native of St. Cloud, Minn., Richard Virden entered the foreign service in the 1960s, starting his career in Vietnam, serving two tours of duty in Poland from the darker Communist days of 1977-1980 to the brighter post-Communist era 1994-97, and a three-year stint in Romania 1990-93.

He can never forget a night in Warsaw in October 1978. He was watching the evening news, which delivering its daily fare of the heroics of the party and the achievements of Polish workers. Suddenly, in the middle of the program, the anchor nervously read the wire story that Karol Wojtyla had been elected the new Pope. The anchor fumbled for words and then moved on with routine news in the hope that the boredom of one more tractor factory report would cause viewers to forget the news about Wojtyla. 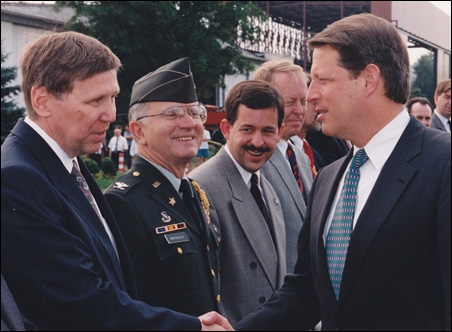 Virden knew that this was the beginning of the end of the Communist regime. His view was confirmed that next summer when in June the pope returned to his native Poland. Over 20 million Poles turned out for the pope’s appearances in Krakow, Auschwitz, and Warsaw.

It was in effect a national swearing of allegiance to another Poland. Paraphrasing scripture, the pope told not just the Poles, but all of Eastern Europe, “Be not afraid, I am with you.” In Virden’s words, “The Pope’s visit was a steroid shot in the arm to the opposition.” Within one year after the pope’s visit, a new Polish labor movement — Solidarity — had over 13 million members.

Also don’t forget that the pope played the role of a diplomat, not a crusader, in the endgame of the Cold War. In his 1979 visit to Auschwitz, he asked Poles to remember that Russians had been among the first victims of the Nazi death camp. Less than in month after the fall of the Berlin Wall, he met Mikhail and Raissa Gorbachev at the Vatican.

Secondly, remember the Schabowski factor. If Jon Stewart had been around then to interview the political leaders from Washington to Moscow and the capitals of Eastern Europe, the truth would have been obvious. These guys were for the most part clueless. Their greatest contribution was to do next to nothing and not stand in history’s way.

The Cold War was not won by political genius or heroism that came from the top down. “The real hero of the end of the Cold War,” Richard Virden recalls, “was the average person who took to the streets in protest.”

The one-time electrician in the shipyards of Gdansk, Lech Walesa personified the heroism of Eastern Europe’s Everyman. His story and the stories of the other opposition movements will be the subject of my next posting that look at the events of 1989 from where the revolution started, from the viewpoint of the bottom up.

Looking back 20 years: Who deserves credit for ending the Cold War?