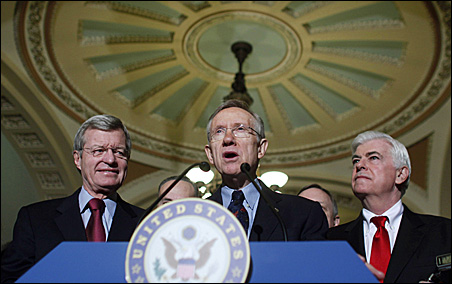 The party-line vote was 60-39, with no Republicans supporting the measure. It was the first Christmas Eve vote in the Senate since 1895, according to Senate historians, when the body met to consider including former Confederate officers in the U.S. Army.

“The Senate vote this morning was an important step forward to a final vote on health care reform,” said Sen. Amy Klobuchar. “Minnesotans know that we can’t simply keep pushing our problems to another day. Rising health care costs are unsustainable, busting the budgets of families and businesses alike.”

Sen. Al Franken said: “The legislation that the Senate just passed today will bring health coverage to an additional 295,000 Minnesotans by 2019 and give millions more the peace of mind that they will no longer be one diagnosis, one accident, one pre-existing condition, or one pink slip away from losing health coverage. This bill does not fix all the problems with our health care system, but it will help begin to bring down costs and is a significant down payment toward the goal of quality affordable health care for all Americans.”

Now comes the hard part: merging the House and Senate bills into one piece of legislation that can pass both houses.

“I want to tell you… that this fight isn’t over. It is long from over,” Senate Minority Leader Mitch McConnell said.

Merging the bills
It’s hard to understate the differences between the two bills [PDF] — or how much members of each chamber want the final product to hew closely to the one they passed.

Klobuchar was asked Tuesday if there was any provision in the House bill, not also in the Senate bill, that she’d like in the final package. She couldn’t think of any. California Democratic Rep. Louise Slaughter, chair of the powerful House Rules Committee, took almost exactly the opposite line, saying Wednesday that the “Senate health care bill is not worthy of the historic vote that the House took a month ago.”

There’s seemingly little room for error in either chamber. The Senate passed its measure on a 60-39 party-line vote with no Republican support. They’ll need all 60 votes on the new bill, because it takes 60 to cut off a likely filibuster attempt.

In the House, the magic number is 218, and again there’s almost no room to spare — the House health-care bill passed 220-115, with just one Republican voting in favor. There may be more wiggle room in the House though — several liberal lawmakers protested the House vote with “no” votes yet may ultimately hold their noses and vote for the final bill.

“I think when we take the best of the House and best of the Senate, I believe we’ll pick up some votes,” Rep. Betty McCollum said.

Several Democratic lawmakers and staffers conceded that no Minnesotan is likely to be chosen for a conference committee. Instead, they’ll have to work through the members there — and in the court of public opinion — to get their ideas in.

All three Minnesota House Republicans voted against the measure the first time, and each has said they will almost certainly oppose the final measure.

“Democrats in Congress and the White House have grown so infatuated with the notion of a ‘historic’ achievement they seem to have forgotten the importance of sound policy,” said GOP Rep. John Kline. “The American people deserve health care reform that meets their needs without mortgaging their children’s future or threatening their quality of care. When we return in the new year, I continue to believe the most thoughtful, effective approach to health care reform would be to hit the reset button and develop sensible, bipartisan health care solutions.”

Rep. Collin Peterson, a Democrat, voted against the House measure, but told MinnPost in late November that he was open to considering the Senate’s plan, which he described as more “middle-of-the-road” than the House plan.

“I don’t know enough about [the Senate plan] to know whether I would vote for it or not, but clearly it moves in the right direction,” Peterson said at the time. “I think [in] our bill there’s too much ideology and I don’t think it’s necessarily workable.”

Differences
Several questions remain, among them how the final bill will be paid for. For example, both bills would raise taxes on medical devices by an estimated $20 billion over 10 years, but they differ in how said taxes would be collected. Each bill also contains a number of small provisions that the responsible senators will fight to maintain. Two examples of that in the Senate’s bill: A breast cancer awareness campaign targeting at-risk groups that Klobuchar has strongly backed and an expanded diabetes prevention program that Franken supports.

Probably the biggest structural difference between the two plans is how the insurance plans would work. A public option would be created under the House measure to compete in an insurance exchange, while the Senate had to drop the public option to appease a group of centrist Democratic senators.

Rep. Keith Ellison is among the more liberal members of his caucus who say they’ll fight to keep the public option in some form — though such a plan already failed to find a filibuster-proof majority in the Senate.

The key joist holding up the Senate’s plan is a measure backed by Franken that would require insurers in large group plans to pay at least 85 percent of health premiums to actual health-care costs, rather than taking the money as profit or using it to cover administrative or advertising costs. Small group and individual plans would have an 80 percent mandate. If they don’t hit those thresholds, the difference would be refunded to plan participants at the insurers’ expense. Such a change likely wouldn’t affect Minnesota greatly — on average plans in the state spend 91 percent of premiums on health-care costs, Franken’s office said.

Franken said he’d fight to keep that provision in the final bill, regardless of whether or not the measure also contains a public option.

One item where Minnesota Democrats are likely to be united is on adding quality of care to Medicare reimbursement rates. Currently, world-leading medical facilities like the Mayo Clinic in Rochester, Minn., get less than half the money for the same procedures as hospitals in McAllen, Texas, due to geographic rate disparities — despite Mayo having generally better patient outcomes.

“This will move us away from the fee-for-service system which punishes Minnesota providers because it rewards volume of care, not value,” Franken said Wednesday. “The provisions in the Senate and House bills are different. The Senate is generally stronger but we may want to include some of the House language, such as expanding the value index to non-hospital providers.”

McCollum agreed, saying that issue is her “number one priority.”

Speaking of geographic disparities, what about the Senate’s provision that has the federal government pick up the entire tab for Medicaid expansion in Nebraska — and only Nebraska — as part of a deal to get the last wavering Democratic senator on board?

“I don’t think that’s going to go over so well in the House,” McCollum predicted. “That’s why we have conference committees.”

Abortion
Even if all that gets sorted out, questions over abortion could still squelch a potential deal.

Key to the original House bill’s passage was the so-called Stupak amendment, language that was influential in securing the votes of pro-life Democrats like Rep. Jim Oberstar. The provision stipulates that any government-run insurance option and any private insurance plan on the proposed health-insurance exchange that accepts people using government subsidies would be barred from offering abortion coverage.

It’s no secret that most pro-choice liberals hate the amendment, but unlike in the House, the Senate defeated an amendment nearly identical to Stupak on a procedural vote when it came to the floor. Instead, the Senate adopted softer abortion language as a concession to Nebraska centrist Ben Nelson, the 60th and final senator to sign on to the health reform package.

In an early November letter to House Speaker Nancy Pelosi, McCollum pointed to House-Senate negotiations as the perfect time to try to get rid of the Stupak provision once and for all. “I look forward to working with you, Madam Speaker, to ensure a strong health care reform conference report emerges and that access to reproductive health care is not limited for women,” she wrote.

But while Stupak doesn’t have the votes to pass the Senate, the House may not have enough votes to pass a measure without it. Stupak has told reporters that he and at least 10 other pro-life Democrats who voted for the House bill will vote against the final health care reform package unless his amendment remains.

Signature
One thing members won’t have to worry about is appeasing the White House. President Obama, in an interview with Jim Lehrer of PBS Wednesday, said he would sign either the House or Senate bill into law.

“I actually think that reconciling them is not going to be as difficult as some people may anticipate,” Obama said, adding that he thinks the two bills overlap by as much as 95 percent.

The White House has been clear that it wants a bill signed before Obama delivers his State of the Union address, which hasn’t been scheduled yet but is likely to come in late January or early February. That target may be difficult to reach.

First, combined language must be settled on. No bill will go anywhere without being scored by the Congressional Budget Office, which will estimate how much it would cost. With a positive result (defined as costing less than $900 billion and reducing the deficit over the next 10 years) from the CBO, the bill must then get debated and voted on one final time.

Getting that all to happen by the State of the Union would require a level of coordination and cooperation that hasn’t been seen in either chamber since the health care debate began. But that’s not deterring the White House.

“I’ll be rolling up my sleeves and spending some time before the full Congress even gets into session because the American people need it now,” Obama said. “I intend to work as hard as I have to work, especially after coming this far over the course of the year, to make sure that we finally close the deal.”

Derek Wallbank is MinnPost’s Washington, D.C., correspondent. He can be reached at dwallbank [at] minnpost [dot] com.

Statements and reaction to the Senate vote

Remarks by the President on Senate passage of health insurance reform

DFL Statement on the Senate Vote to Pass Health-Insurance Reform