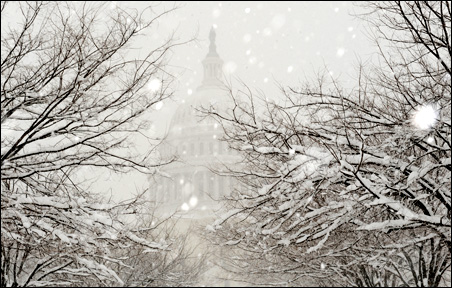 WASHINGTON, D.C. — Ever since coming to Washington 45 years ago as a reporter for newspapers in St. Paul and Duluth, I’ve dismissed Washingtonians as winter wimps.

Even a forecast of snow and falling temperatures triggers widespread panic in the nation’s Capital, as it has in recent days, causing bedlam on the Beltway, consternation on Capitol Hill, gridlock in Georgetown, paralysis on Pennsylvania Avenue, weak knees at the White House and fear and loathing in Falls Church, Va., where I live.

As a result, schools close, public events are canceled, members of Congress flee town, and Washington pretty much shuts down. Even Tai Shan, the National Zoo’s famous 5-year-old giant panda, panicked and left for a breeding program in China before last weekend’s storm hit, and I hear even the polar bears want to go back to Alaska. Meanwhile, I had to wait an hour in line at the local Safeway Thursday night because everyone was stocking up on food and supplies. The couple in front of me had two overflowing grocery carts and a $256 bill.

All these years, I’ve scoffed at Washington’s inability to cope with snow and cold weather, bragging that a few inches of snow and freezing cold are no big deal for a native Minnesotan. I tell people about walking a mile to country school through knee-deep snow while growing up on a farm near Blue Earth, driving through raging blizzards at 65 mph as a teenager and covering the St. Paul Winter Carnival at 20-below zero as an adult. To really freak them out, I tell about getting rear-ended on University Avenue one December morning when it was 44 below zero.

For good measure, I remind them of what Bob Bergland once said: that Minnesota has 11 months of winter and one month of tough sledding. And then I tell them about the time I was huddled around a campfire with a friend on the Iron Range in January and it was so cold that when we spoke, our words fell frozen to the ground and had to be thawed out over the fire before they could be heard. Some of them actually believe me.

But no longer will I deride Washingtonians as snow sissies because, I’m ashamed to admit, I have become one after this weekend’s record-breaking blizzard, dubbed “Snowmageddon” by President Obama — who was reduced to taking an SUV instead of his armored limousine to a Democratic pep rally on Saturday — and “Snowpocalypse” by the media.

32 inches of snow
The storm, which started Friday morning and ended Saturday night, dumped more than 2 feet of snow on the Washington area, including 20 inches on my circle and 32 inches at Dulles International Airport. The heavy wet snow felled trees and knocked out power for more than 200,000 homes and businesses — including some in our neighborhood — collapsed snow-laden roofs and closed Dulles and Reagan National airports. Some residents took refuge in hotels, as did stranded tourists, and it was reported that there were no hotel rooms available within 14 miles. The historic storm even affected the spiritual realm; Catholics were advised by the cardinal archbishop of Washington to watch Sunday Mass on TV instead of trying to get to church.

By this morning, many side streets still aren’t cleared, while primary streets and highways are slick with ice and packed snow. The federal government closed down Monday, and again today, along with most schools and many businesses, and Washington’s Metrorail system is only operating on its underground routes. The Washington Post, which like the New York Times wasn’t delivered over the weekend, carried a banner headline (“A Historic Mess”), while local radio and TV stations interrupted the Super Bowl for reports on storm damage and recovery efforts.

The latest snowfall, one of the heaviest recorded in the nation’s Capital in modern times, came on the heels of another major snowfall on Dec. 19, vestiges of which were still apparent in our neighborhood last week. Even worse, the National Weather Service warned that another storm is on the way with a potential of 12 to 16 inches of fresh snow today and Wednesday.

That was the last straw for me. After living in Washington for almost half a century, I have to admit my blood has thinned and my back no longer tolerates shoveling snow. That’s why I hired a snow-removal crew on Sunday at my wife’s insistence — at a cost of $300 — to shovel us out and clear the snow off the flat roof of our bedroom addition.

As I watched the snow removal crew at work, I asked them if they’d be available after the next snowfall hits, and they assured me they would be. That’s when I realized that my transition from Minnesota macho man to Washington winter wimp is now complete. Call me a snow sissy if you want, but I’m no longer going to brag that this is just like a spring day in Minnesota.