In many of the thousands of lawsuits he has filed over the years against the Roman Catholic Church and its clergy, St. Paul’s Jeff Anderson ran up against the same seemingly impenetrable legal wall.

Because sex-abuse victims frequently endure years of misery before coming forward, by the time Anderson’s clients were ready to go public with their stories, statutes of limitation — legal deadlines for filing suit — had elapsed.

But now, after 27 years of looking for alternative legal avenues, it seems Anderson has found a couple of chinks in the wall.

As a result of two unrelated wrinkles in Wisconsin law, church officials were recently forced to turn over documents in several cases he is pursuing on behalf of alleged abuse victims. Among them is controversial correspondence between the Vatican and church officials in Wisconsin that reveals that Cardinal Joseph Ratzinger, now Pope Benedict XVI, knew that a Milwaukee priest abused as many as 200 boys at a church school for the deaf during the 1950s, ’60s, and ’70s.

Scared of a potential scandal when victims complained, in 1996 Wisconsin church officials asked the Vatican for guidance. Eight months later, Ratzinger’s office ordered then-Milwaukee Archbishop Rembert Weakland to proceed according to a little-known protocol, Anderson said Thursday. Instead of prosecuting or defrocking the priest, the protocol dictated strict silence, he said during a news conference he called after his discoveries became the topic of a front-page story in the New York Times.

All trails lead to Rome?
“All trails involved in the cover-up and the concealment of sex abuse by clerics lead to Rome and to the pope,” said Anderson. “As these documents reflect, their goal — and their purpose — at all times was to keep this secret and known only among themselves.”

From 1981 until his election as pope in 2005, Ratzinger was head of the Congregation for the Doctrine of the Faith, the Vatican office that decides whether accused priests should be tried and defrocked. The office handled thousands of cases involving clergy sex abuse during his time there.

The letters Anderson obtained show that church officials were first told 36 years ago that the late Rev. Lawrence Murphy was molesting boys at St. John’s School for the Deaf, where he had worked since the 1950s. Many, it turned out, were solicited in the confessional.

In 1974, in response to complaints from several children, Murphy was moved to the Diocese of Superior in northern Wisconsin, where he continued to serve in positions where he had contact with youth. One of Anderson’s clients claims to have been abused in his cell at the local juvenile detention center where Murphy was chaplain.

In the 1990s, after several high-profile prosecutions elsewhere had put sex abuse scandals in the Catholic Church in the public eye, a number of Murphy’s former students came forward with their stories of abuse. Murphy admitted molesting at least 34. After concluding there could be dozens more and worried about the publicity any ensuing lawsuits would generate, church officials wrote to Ratzinger.

Anderson said he had long known of a strict protocol governed the church’s handling of reports of abuse but was surprised to learn that how much of a chronology of the cases existed. “None of what we’ve read in these documents is new to us,” Anderson said. “What is new is the document trail.”

Protocol and public-relations damage control
The documents released by Anderson this week depict a church preoccupied with public-relations damage control. “True scandal in the near future seems very possible because in November of 1996, I received a letter from an attorney suggesting the possibility of civil court action which no doubt would become well known in this community,” Weakland wrote in one of the letters.

Milwaukee church officials wrote to the Vatican three times before they heard back from Ratzinger’s secretary, who ultimately replied that they were to proceed according to a 1962 protocol outlining the process to follow after a report of sexual abuse of a minor, homosexuality, bestiality, or in cases of solicitation in the confessional.

“When this process starts, no one is supposed to know about it except those involved,” said Anderson. “The victim doesn’t even know when the process is ended.”

In Murphy’s case, the process should begin with a secret canonical trial in Milwaukee, the Vatican instructed Wisconsin clergy in 1997. A month later, Murphy, who had shown no remorse even when he admitted to some of the molestations, wrote to Ratzinger. He was 72 and in ill health, he said.

“The accusations against me were for actions alleged to have taken place over 25 years ago,” he wrote. “I have repented of any of my past transgressions, and have been living peaceably in northern Wisconsin for 24 years. I simply want to live out the time that I have left in the dignity of my priesthood. I ask your kind assistance in this matter.”

The Milwaukee archbishop pushed for a trial, but the following spring the Vatican acceded to Murphy’s wishes. “He implored Ratzinger directly to give him a free pass,” said Anderson. “Because they did not want more publicity, they gave Murphy, an admitted, known pedophile, a free pass.” 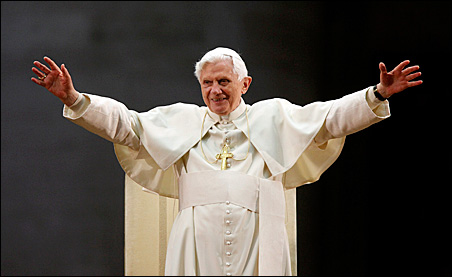 REUTERS/Alessia Pierdomenico
Pope Benedict XVI greets followers during a youth festival in St. Peter’s Square at the Vatican on Thursday.

“At no time did anyone in the Diocese of Milwaukee, the Diocese of Superior or the Vatican make any mention of determining the amount of damage done to the victims of this scandal, or try to determine the needs of the victims,” said Tom Doyle, a Dominican priest and canon lawyer who spoke with Anderson and attended the news conference.

In fact, church officials did not make an effort to ensure that Murphy had no contact with potential victims, added Mike Finnegan, one of Anderson’s colleagues. “At the time of this letter, 1996, Lawrence Murphy, the pedophile in this case, was still working in a parish in Boulder Junction in Wisconsin,” said Finnegan. “He was still working with youth. He was working with high school students. The whole eight months Cardinal Ratzinger, now pope, did nothing, he had access to these youth.”

Laws spelling out how long after an injury people have to bring suit make pursuing church sex-abuse cases particularly difficult. It’s often not until victims have led unhappy lives as adults for some time that they are ready to take stock of their past. Victims’ advocates in the Midwest, where the statutes are relatively strict, and those elsewhere have lobbied to loosen the allowed deadlines for such cases. Church leaders have worked hard to keep the statutes in place.

Anderson finds new ways around legal roadblocks
Anderson has refused to accept them as a definitive roadblock, however, and has sought new ways to haul the church into court. In the process, he has gained a reputation among critics as a zealot. The documents highlighted Thursday were the result of his creative use of two wrinkles in Wisconsin law.

A number of years ago, all 20 of his Wisconsin cases were put on hold pending the outcome of parallel cases involving liability insurance. Because complex civil cases can drag on for years, Wisconsin law allows lawyers to take depositions from witnesses who are 75 or older.

When two key witnesses in his five cases involving Murphy, including former Archbishop Weakland, reached that age last summer, Anderson was ready with a subpoena. Under oath, both said they had exchanged letters with Vatican officials about the cases; one traveled to Rome for a meeting about them.

Meanwhile, Anderson had begun filing suits accusing church officials of fraud, which is not subject to the same statutes as other complaints. In 2006, a Wisconsin court said a suit against the Milwaukee archdiocese could move forward and ordered the church to reply to Anderson’s requests for records pertaining to the case. In response, he recently received the chain of letters between Wisconsin and Rome.

“We’ve been in litigation against the Archdiocese of Milwaukee for 22 years,” said Anderson.

The Wisconsin documents have come to light at a time when the Holy See is facing questions about the pope’s handling of sex-abuse scandals in Germany and Ireland. Benedict recently wrote to Irish church officials, urging them to cooperate with civil authorities in abuse cases.

Hours before Anderson addressed the news media in his downtown St. Paul offices, activists from Wisconsin and elsewhere with SNAP (the Survivors Network of Those Abused by Priests) protested outside the Vatican.

Vatican spokesman Federico Lombardi issued a statement saying that defrocking is not automatic even in cases where abuse is proven. “The tragic case of Father Lawrence Murphy, a priest of the Archdiocese of Milwaukee, involved particularly vulnerable victims who suffered terribly from what he did,” the statement read. “By sexually abusing children who were hearing-impaired, Father Murphy violated the law and, more importantly, the sacred trust that his victims had placed in him.”

Representatives of the Archdiocese of St. Paul and Minneapolis declined comment. “I hate ‘no comment’ and we never use it, but it’s not anything we know any more about than we have read about on the Vatican website,” said spokesman Dennis McGrath.

Catholic leaders often complain that Anderson has failed to acknowledge everything the church has done to address the issue of sex abuse. U.S. churches have paid out billions in settlements and related expenses and tightened screening processes for would-be priests, they note.

Noting that Anderson’s legal crusades have made him a wealthy man, church defenders complain privately that his zeal for the issue will wane along with the supply of potential plaintiffs.

For his part, Anderson says his ultimate aim is transparency. Until they do away with the “culture of silence,” church leaders can’t truly put the issue of sex abuse to rest, he believes.

Clutching a sheaf of documents, Anderson said Thursday that if he had his way, he would ask Pope Benedict about the chain of letters. “I have yet to put the pope under oath,” he said.