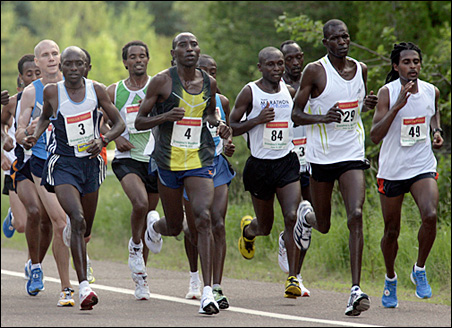 DULUTH — Locked in concentration in the tightly contested race, Philemon Kemboi, the Kenyan who won Grandma’s Marathon on his first attempt on Saturday morning, said he saw nothing along the race course that struck him as unusual. “I noticed all the happiness and all the cheering,” Kemboi, who speaks Swahili, said through a translator. “Nothing much surprised me. I was just encouraged by all the joy.”

As part of a 20-man lead pack that shrank to nine and eventually three, Kemboi apparently was too busy to notice the belly dancers in downtown Duluth, three men in drag on bicycles, the classical string quartet playing in a restaurant parking lot, the volunteers in hula skirts (male and female) at the Mile 17 aid station, along with a woman in a banana costume, the Elvis impersonator, the omnipresent bagpipers on Lemon Drop Hill, and the guy in a yellow-and-red rooster costume as the punch line to a sign that read, “Dance Until You Reach the Rooster.”

The party that is Grandma’s race weekend roared across the Twin Ports on Friday and Saturday. Thousands of people in brightly colored running shoes took over Duluth, some there to run, some there for the show.

Any race that ends at a bar — specifically, alongside the deck of Little Angie’s Cantina and Grill in Canal Park — has a pretty good chance of being a blast whether you imbibe or not. That’s the legacy of Grandma’s, which retained the name of its original title sponsor even after that Canal Park establishment reduced its financial stake.

Race has become weekend-long event
“It’s not just the race,” said Chris Rabbe, the Minnesota-born-and-raised 2009 champion who struggled to finish sixth this time. “The whole weekend is kind of an event, which makes it a whole lot of fun.”

From the massive Friday night spaghetti feed at the Duluth Entertainment Convention Center (DECC) to the three live music shows headlined by GB Leighton under a tent in Canal Park, Grandma’s — which the locals pronounce as if the “D” was another “M” — has signaled the unofficial start of summer along the North Shore for most of its 34 years.

This year’s races, which included a 5-kilometer race Friday and a half-marathon Saturday, attracted nearly 16,000 runners. The party was tempered by Grandma’s first fatality, a half-marathoner who died after finishing the race. Many runners weren’t aware of it until the next day. He since has been identified as Norman Ruth, 64, of Hermantown.

Race organizers claim Grandma’s brings in $8.5 million annually to the Twin Ports area. It is especially a boon to area hotels, with many requiring a two-night minimum and selling out regardless of rate.

“You can’t say that it makes the whole summer, but it’s something that makes a big impact across the board,” said Terry Mattson, the president of Visit Duluth, the city’s tourism bureau. “Grandma’s is part world-class event, and partly, if not more so, a big old party. It’s probably our biggest iconic event.”

Even the low-key stuff draws big. A standing-room crowd packed the DECC’s Edmund Fitzgerald Room on Friday afternoon for a talk and autograph session with Kara Goucher, the 2008 Olympian and a Duluth East High School graduate. About 100 people lined up for Goucher’s autograph, and almost everyone wanted a photo, too. Goucher obliged her last fan at the same time Dick Beardsley, the garrulous 1981 Grandma’s champion who spoke after her, finished his talk.

The marathon itself, with about 7,400 entrants, is the 13th largest in the United States and the only one of the top 20 not in a major metropolitan area. This year’s field included runners from all 50 states, the District of Columbia and Puerto Rico, plus 40 foreign countries. Kenya, which dominates distance running, had 27 entrants, more than any other foreign nation except Canada (98). Oh, and in case you’re wondering: 133 entrants listed themselves as grandmothers, the oldest being 83. 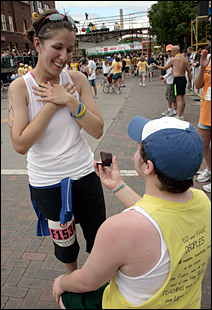 The course begins just south of Two Harbors, winds down Scenic Highway 61 along Lake Superior, cuts through downtown Duluth via London Road and Superior Street, banks a hard left at Fifth Avenue West over Interstate 35 and snakes behind the DECC into Canal Park. It’s a pretty course, tree-lined most of the way, and so quiet in places you can hear runners’ feet striking the pavement.

The crowds gain size and fervor as runners approach Duluth, with one of the noisiest spots along Lemon Drop Hill, just after Mile 22 at the race’s toughest incline. (The hill is named for a restaurant that used to be nearby.)

Duluth area rolls out civic welcome mat
Among the special touches: Race organizers recruit and encourage entertainment along the course. High school cheerleading squads, marching bands and musical ensembles, and costumes are all part of the show. Signs held by spectators range from specific (“Go Team Knutson”) to general (“Hello complete stranger, I’m so proud of you”) to inside-runner stuff (“Nipple Tape, 50 cents”). The Lemon Drop Hill bagpipers have entertained there for almost 20 years.

And you never know what you might see. Respected running writer Kevin Pates of the Duluth News-Tribune and Beardsley broadcast the race on radio while riding in the back of a minivan. Pates was in the middle of his call Saturday when three belly dancers in blue outfits shimmied onto Superior Street, startling Pates so much he included it in his play-by-play. People listening in the media center reportedly cracked up.

(At least Pates didn’t fall out of the minivan, which happened at the start several years ago when it took off while Pates was retrieving a Mountain Dew bottle Beardsley had knocked over. A race spotter on a bicycle helped Pates catch up to his co-host. The tumble is such a part of race lore that before the start Saturday one runner yelled over at Pates, “Are you staying in the van?”)

Most of the 5,000 race volunteers have done it awhile. Bill Olson of Hermantown, Minn., along with his wife, Nancy, and another couple, Chuck and Sally Hegg, have served as aid station captains at the five-mile marker in Knife River since 1985. Olson said he and his wife first volunteered in 1980 at the urging of a family friend. Olson enjoyed it so much he even ran the race once.

“It’s not hard to find volunteers,” he said. “You call six or seven people, they get 20 people, and then those 20 people get more people. And they want to come back next year.”

Why? “It’s a hoot,” he said. “People are flying by us saying, ‘Thanks for being here. We need you.’ You get that all the time.

“Of course, it’s a situation where everybody’s feeling pretty good. I’ve never been anywhere else. At 20 miles, you’re starting to do mind games. But at 5, everybody’s having a good time.”

On race day, Olson leaves his home about 4 a.m. for the initial setup of 18 tables across one-eighth of a mile. Once the race gets rolling, 150 volunteers hand out 30,000 cups of water or sports drinks in about 45 minutes. Then Olson packs up and heads for the post-race party in Canal Park. Often, in the beer tent he recognizes a runner in an unusual shirt or getup who passed through his station.

“People in Duluth, it’s kind of a pride thing,” Olson said. “So many out-of-towners are coming in. We want to put on a good show.”

Hospitality helps spread the word
For elite runners, the $100,000 total purse is about one-eighth that of New York and Boston; the men’s and women’s winners get $10,000 each, plus time bonuses. The hospitality and word of mouth about the race keeps international elite runners coming.

Sammy Malakwen of Kenya stayed with a host family, Steve and Kim Salowitz, his first year here in 2007. When he collapsed from dehydration after finishing 32nd, Kim Salowitz followed him to the hospital. Malakwen said he was so taken with the Salowitzes that he returns to Two Harbors every year to run Grandma’s and train, hoping to use the race as a springboard into more elite fields.

“He knows people here,” Salowitz said. “A lot of people here consider him a friend, and he considers them friends.” 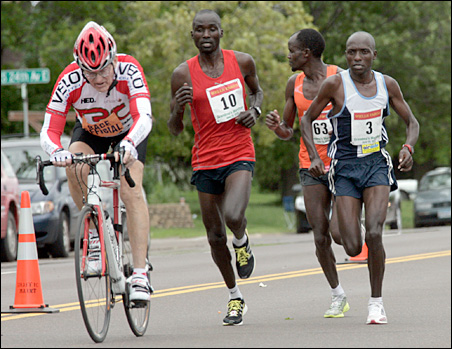 Another international runner who dropped out at Mile 17 was brought to the media center, where workers helped him reconnect with his host family.

As for Kemboi, 36, he had never even been to the United States before. Kemboi said a fellow Kenyan, Charles Kanyao — last year’s runner-up — suggested he run Grandma’s and thought he could win it. Kanyao did not return, but Kemboi made him look prescient by pulling away from countrymen Chris Kipyego and David Rutoh with about a mile to go to win in 2:15:44, his first career marathon victory.

“I just thought it was time,” he said.

Grandma’s has a way of inspiring people. Goucher used to be a volunteer, handing out water while in high school. She said she may run the half-marathon in 2012, when the event will serve as the U.S. championship. And Beardsley, who set the course record of 2:09:37 in 1981, promised to commemorate the 30th anniversary of that victory by running next year, even though he has had his right knee replaced and is scheduled for his third back surgery this week.

Kemboi hopes to be back, too. Making his way through the crowd after his victory, Kemboi never noticed the curiously dressed pair by the finish — a fur trapper in a coonskin cap, and a Revolutionary War soldier in a curly white wig.

Pat Borzi, a frequent contributor to the New York Times, writes about sports for MinnPost.com.