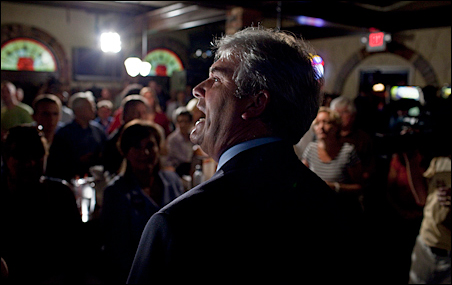 There was heat — oh, so much heat and sweat and anger — but not a great deal of light today when Tom Emmer met with a restaurant workers at the Ol’ Mexico Restaurante in Roseville.

Thing is, this meeting between the Republican Party’s endorsed gubernatorial candidate and workers who felt offended by things he’d said last week regarding their wages and tips was likely only Round One.

There are two things that separate Emmer from most political candidates: He says what he thinks, and he’s not cautious about diving into the midst of the fray.

“I’m not like most politicians who head out of state or hide under their desk when something they’ve said has been misreported,” Emmer told the overflow crowd. “I’m here. Let’s talk about it.”

There was yelling at Emmer. And sometimes the candidate yelled back.

Passionate session
There was passion, and at one frightening moment late in this wild session, a young man leaped through a back door, up onto the platform where Emmer was seated and dumped a huge container of pennies over and around the candidate. The young man — yelling something about “Tips!” — raced back out of the room.

“Scared me out of my shoes,” Emmer admitted after this brief moment of chaos.

Then, he laughed. As so often is the case with Emmer, he talked about hockey.

“In hockey,” he said, “somebody’s always got your back.”

A portion of Wednesday’s discussion provided by The UpTake.

In this case, he said, he looked toward his spouse, Jacquie, who was seated just in front of the platform.

“She was laughing her head off,” said Emmer, shaking his head in mock indignation.

After she was done laughing, the candidate’s wife even helped a child scoop some of the pennies into his baseball cap. For the kid, this event had turned into a financial windfall.

It turned out that the intruder, Robert Erickson, was not protesting anything involving the servers. He later explained that he is upset about Emmer’s support of Arizona’s immigration law.

Emmer seeking positive outcome
As he typically does, Emmer attempted to turn this moment of vulnerability into a positive about his campaign.

He said that throughout the campaign he’s going to say things that might upset some people. But, in the end…

“Sometimes we have to agree to disagree, but we have to remember, we’re all Minnesotans. We gotta live together. … The poor kid who did that [dump the pennies]. Have a little courage. Come back and talk to me. Next time, I hope he comes in the front door so we can talk.”

Back to this bizarre session, which was all set off last week, when Emmer made a couple of comments about servers making $100,000 a year and the need to consider a tip credit, which servers and most in the media assumed meant some sort of reduction in the minimum wage paid to servers who receive tips.

Emmer repeatedly denied that he wants to “cut anybody’s wages.” But he also continued to say he’s interested in hearing about tip credits. How can you have one without the other?

“I won’t talk about that today” said Emmer after the session. 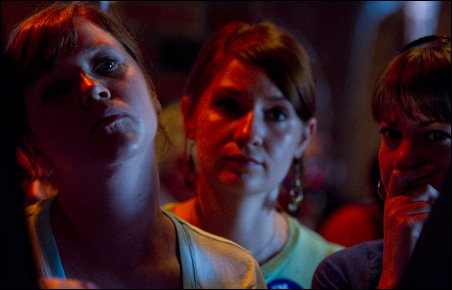 Clearly, though, that was the rub in all of this, making it impossible for angry servers and the candidate to have a meaningful conversation.

Over and over, servers — some at the point of tears — talked about how hard they work to struggle to get by and how they can’t afford to see their wages cut.

And over and over, Emmer insisted, “I never said I’d cut your wages.”

Sporadically, there were shouts, boos and some applause, and then the same debate would start again.

“Why would you cut our wages?”

Sarah Janecek, a conservative commentator and Republican Party activist, served as emcee (so to speak), carrying the microphone from one person to the next.

Sometimes, Janecek would throw out a plug for the Ol’ Mexico Restaurante.

“It’s happy hour! Two for one margaritas … But remember, tip as if you’ve paid full price for two.”

Before the main event, the DFL and some servers, held a small event in the sweltering heat outside the restaurant.

At that event, servers talked of how hard they work and of how Emmer doesn’t get it. They then took questions from reporters.  Suddenly, though, Peter Roess, a stadium supporter who was wearing a purple Vikings cap, interrupted the reporters and started asking questions of the servers.

How did they feel about a new Vikings stadium?

“We’re here to talk about Tom Emmer,” said Ariel Lawson-Kohl, a server at the Day by Day restaurant in St. Paul.

Roess didn’t seem to care. He kept talking about a new Vikings stadium.

He wasn’t the only person at the Ol’ Mexico Restaurante with an off-agenda issue. Besides Erickson, the penny pitcher, a woman in the crowd inside the restaurant tried to broach the subject of the Arizona immigration law with Emmer.

She was shouted down by both those who support Emmer and those who are upset by him.

And many, many people were upset by Emmer. Clearly, this is a pol who can attract a crowd.

A server named Ann poured out her disgust with her belief that Emmer has “no understanding” of people who are struggling to get by. She went on for more than a minute.

Emmer looked at her the whole while. When she was finished, he turned to the crowd of more than 200 and said, “I’m going to mark Ann down as undecided.”

This crack, not surprisingly, drew mixed reviews. His supporters laughed. His detractors glared.

There was a substantial group of Emmer supporters in the room. And some of those supporters appeared to be servers.

One server, who said his name was Alex, said he’d worked in Michigan and Nebraska, states that pay below minimum wage to people who get tips. He claimed to make more money than he makes in Minnesota, saying, “People are aware, so they tip more.”

“Go back to Omaha!” yelled one.

On and on it went.

Emmer repeatedly said he does not support cutting the minimum wage, though at one point he did say he’s no big fan of minimums.

“I believe it frustrates the ability of the best people to make more,” Emmer said.

Everything pretty much came to an end, when the pennies were tossed onto the table, though Emmer did make it a point to go to meet with a group of people he called “my cheering section.”

Those people, off to the side of the room, had hooted the loudest at some of the candidate’s responses.

“I’ll never run, I’ll never hide,’’ he said as he left the restaurant.

Given his style, there’ll surely be more meetings like this with more groups of Minnesotans.