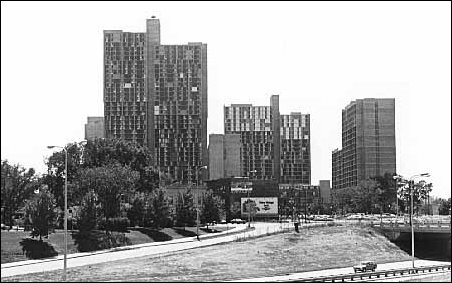 The Strib’s James Lileks admires the complex of high-rise buildings in Minneapolis’s Cedar Riverside neighborhood, but only from a distance.

“The size is impressive, and the colored panels … give it a lively appearance, like the world’s largest Mondrian painting,” Lileks writes. But when he gets closer to the complex, now known as Riverside Plaza, the columnist takes a decidedly different view: “Close up, it’s ugly gray concrete in amounts usually used to describe the Hoover Dam.”

Riverside Plaza is back in the news these days because the developer who manages the massive housing complex is seeking city assistance to refinance the project and reorganize its ownership structure.

The origins of the project extend back to the early 1960s, when Keith Heller, a faculty member in the University of Minnesota’s School of Business, teamed up with Martin Segal, a U of M Medical School professor, and his wife, Gloria, to establish a real-estate investment venture.

Dr. Segal became a silent partner in the venture, but Gloria Segal emerged as the public advocate for their investment group. Calling themselves the Cedar Riverside Associates (CRA), the partners began buying up property around what would soon be the university’s West Bank campus in the historic but dilapidated Cedar Riverside neighborhood.

Lofty goals
CRA aimed to make money for its investors, but it had loftier goals. Heller and Segal believed they were promoting community improvement through their ambitious plan to eliminate the Cedar Riverside slums and replace them with a modern new high-rise development that could provide mixed-income housing adjacent to a rapidly expanding public university.

By 1968, CRA had received backing from HUD for its plan and commissioned Ralph Rapson, the head of the university’s School of Architecture, to design its “New Town — In Town” in Cedar Riverside.

Heller and Segal were ambitious developers, but they were also landlords for a group of young people who crowded into the dilapidated CRA-owned properties that were slated for demolition as redevelopment of the area got under way.

Many of these new residents were former and current students at the university who considered themselves part of the counterculture of the 1960s. “Minneapolis’ own Haight-Ashbury,” some would call this down-at-the-heels neighborhood, controlled in large part by the Heller Segal group.

A prolonged struggle with young tenants
When CRA tried to raise rents in its buildings, that action sparked a rebellion. Soon, the real-estate developer was engaged in a prolonged struggle with its young tenants, who were caught up in the social and political ferment of the era. Even with its professed goals of social and economic uplift, CRA was viewed with disdain by the ideologically committed young activists who had protested against U.S. involvement in the Vietnam War and now were organizing against what they saw as another oppressive institution that was much closer at hand.

CRA was able to complete construction of its development’s first phase, known as Cedar Square West, but its financial empire eventually collapsed in the face of lawsuits by neighborhood residents and the economic pressures caused by a declining real-estate market in the 1970s.

After the collapse of CRA, Cedar Square West was reorganized through a series of complex public-private partnerships that sought to maintain the project’s federal housing subsidies. East of Cedar Avenue, where the Heller Segal group had hoped to build the next phase of its ambitious development, the student activists were able to take control of the redevelopment process. There, working through their own nonprofit organization, the West Bank Community Development Corp., they proceeded to build and operate a series of small infill residential projects, many of which were organized as moderate-income housing cooperatives.

Today, the former Cedar Square West, renamed Riverside Plaza, has more than 4,000 residents, many of whom are East African immigrants. The project, which opened in 1974, is in poor condition and needs a major overhaul. Last month, the Minneapolis City Council moved ahead on a revitalization plan for the once heralded “New Town – In Town” by authorizing the city’s development arm to issue tax-exempt revenue bonds for the 1,300-unit rental development.

Riverside Plaza: One more effort to revive a ‘new town — in town’