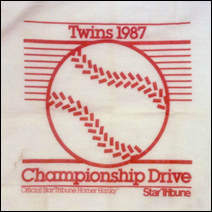 It was a simple little notice that the 2010 Homer Hanky has gone on sale now that the Minnesota Twins have clinched the American League Central Division title the other day.

In a sobering week where several events (this one among them) have made me reflect on my mortality, the thought of the Homer Hanky made me smile and remember one of the most exciting times of my much-blessed newspaper career.

There is a lot of rich history around the Minnesota Twins 1987 World Series Championship. Just this past summer my good friend and former Star Tribune Columnist Doug Grow did a sensational job bringing 1987 to life in his book “We’re Gonna Win, Twins!” The book covers 50 years of Twins history and transcends the Twins.  It is great book with typical Doug Grow touches. His prologue is a wonderful take on the tremendous event I personally witnessed at the Metrodome when the Twins were greeted by 60,000 fans after they beat Detroit to earn the right to go to the Series. The book serves as a nice little 50-year social history too.

There is not near as much to find on the Homer Hanky history. Certainly, it’s not forgotten, but the drama and excitement of the creation of the now iconic Twins symbol seems a bit lost.

In 1987 I was the managing editor of the Star Tribune and Joel Kramer was editor. The newspaper decided that year to enter the St. Paul market in the fall with a separate edition. At the same time we were commissioning new Goss presses. August and September were two of the most hectic months of my career as we developed a new edition with some new staff and tried to introduce color to our readers with  those new presses.  We blew a ton of deadlines during that month and then the pressroom would struggle trying to get both editions out and try to perfect color. Personally, it was my last semester of law school so I had several full plates. 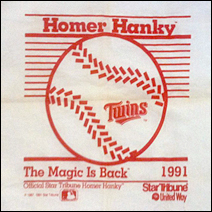 Then came the Twins. To say a a World Series run was not expected that year is like saying I don’t expect Harvard to admit Paris Hilton next week. I REALLY don’t expect that!  A World Series run was NOT on the radar. Several of us at the newspaper were genuinely worried the Twins playoff run could bring us down. It exponentially multiplied our degree of difficulty as we dealt with new presses, new color and an assault on St. Paul.

As any regional newspaper veteran with championship sports teams knows, such an experience creates an incredible fever in your town. In those days that fever could represent huge circulation gains, big ad revenue and tremendous marketing opportunities. 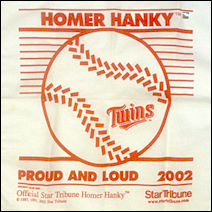 Amid all the chaos at the newspaper, our marketing department hit a promotional home run for the ages when they conceived the Homer Hanky.  The dreaming woman behind it was a friend of mine named Terrie Robbins. Terrie is canned energy. She’d find a way to make a wake an exciting event.  I called Terrie Wednesday morning. She told me an incredible story, and I probably won’t do it justice.

Terrie said that when the “magic number” started to appear in the paper, she and her team got creative. She soon made a presentation to top management and I was in the room. She proposed to produce an initial 200,000 hankies for the first days the playoffs at a cost of $100,000. For that money she promised a big circulation boost and an eventual break-even. The circulation boost would come because after an initial give-away of 60,000 hankies, the only way to get a Homer Hanky was with a coupon in the paper.  Star Tribune Publisher Roger Parkinson looked at her and said, “Do it, but we’d better break even!”

Terrie remembers that as we walked out of the meeting I sidled up to her and said, “Wow, Terrie and you think I am a gambler!” I am and so was she! 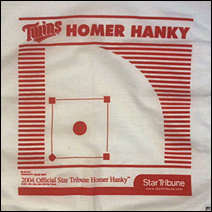 Terrie had conferred with the Twins and had their permission, but when she went back to them just before the playoffs the fellow she had talked to “got really white. He had no idea I was going to pull it off.” That meeting started an attempt by the Twins and Major League baseball to kill the Homer Hanky.  If Terrie has her way nobody will ever let history contend baseball supported it.  Twins officials were convinced  they were going to be the “laughingstock of baseball.” They even threatened that the white hankies were going to distract hitters and force the umpires to cancel the games and the playoff series. She says they angrily charged such a cancellation would be Terrie’s fault.

When Terrie’s volunteer army of employees started to hand out the hankies before the first game Twins officials tried to stop her. Terrie credits Parkinson with being “fearless” by ordering her to go ahead. Terrie’s crew handed out the 60,000 hankies and that was that — until an early Gary Gaetti home run. 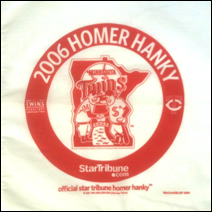 Terrie remembers sitting at the game when Gaetti hit his home run, she got up and cheered wildly because the Twins had gone ahead. But her close friend and co-worker, Jean Peterson, grabbed Terrie, stopped her cheering and demanded she take a look at the stadium.  Terrie says, “I get teary-eyed and get goose bumps just telling you this, but when I looked the stadium was awash with hankies cheering the Twins.” While the crowd cheered Gaetti, Terrie and Jean were exultantly shouting “It worked, it worked.”

Soon we had to take the coupons out of the paper so our success didn’t break us. Terrie started charging a buck a hankie.  First, she put a limit of 10 per customer then the limit went to five and finally to two. The paper had incredible difficulty keeping up with demand.  The lines were blocks long and some people waited six hours for a new delivery. The hankies were delivered in unmarked vehicles and they were stored overnight in the same safe where we kept paychecks.  An incredible 2.3 million hankies were distributed in 1987 and another 1.9 million were distributed in 1991, according to Terrie. 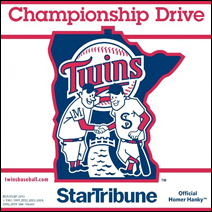 When it was all said and done, we broke even, just as Terrie had promised. Her gamble paid off with one of the greatest marketing coups ever.

And that’s our tale of the Homer Hanky. Nostalgia can be good.

Tim McGuire is the Frank Russell Chair for the business of journalism at Arizona State University’s Walter Cronkite School of Journalism and Mass Communication. He writes a blog about media called McGuire on Media.

Homer Hanky history: The making of a successful promotion campaign