After 16 years as Ramsey County Sheriff, Bob Fletcher says he’s still hungry for the job and is looking ahead to new programs he can implement to stop crime in St. Paul and its suburbs.

But to get that fifth term, he’s got to fend off an election challenge from Assistant St. Paul Police Chief Matt Bostrom.

Bostrom has some stellar crime-fighting credentials — 28 years with the St. Paul Police Department, including a long string of top cop management jobs. He’s had some high-profile stints as deputy chief of patrol, chief of staff and head of St. Paul’s efforts during the 2008 Republican National Convention.

It’s been an odd race so far, with the most visible public disagreements coming over debates and lawn signs. Bostrom says Fletcher is ducking debate appearances and putting up illegal campaign signs. Fletcher says he’s made his own proposals for debates and if Fletcher signs are up in the wrong places, he’ll take them down.

Such sniping is a far cry from the race four years ago, when Fletcher narrowly beat former St. Paul Police Chief Bill Finney in an acrimonious campaign that included implications that a close Finney friend might be involved in a 1981 murder.

That friend, Aaron Foster, was ultimately acquitted of charges in the decades-old murder, but Fletcher now faces questions about his good friend and wedding best-man, Mark Naylon, who is now in prison for taking money in an FBI sting while working for the sheriff’s department. “He shouldn’t have put the money in his pocket, and now he’s paying the price,” Fletcher says.

And Fletcher was in the news in 2009 during reports of mismanagement and misdeeds by the Metro Gang Task Force. The Ramsey County sheriff’s office was the fiscal agent for the task force at the time but not responsible for operating procedures, Fletcher says. He said he was very involved with the gang task force from 1997 to 2004, when it was the state gang force, but others ran it during the problem years.

But the real issue in this race comes down to style.

Political and not subtle
Fletcher is very political — he served on the St. Paul City Council and ran for mayor in the 1980s. He’s not subtle, prides himself on an independent streak and, as such, he’s not well-liked by many in the St. Paul political establishment.

That’s led to a slew of endorsements for Bostrom from county law enforcement officials who say he’s a better choice for running the department. And because Bostrom doesn’t seem comfortable in the rough and tumble of political mud-slinging, many of those supporters have taken on the job of attacking Fletcher. 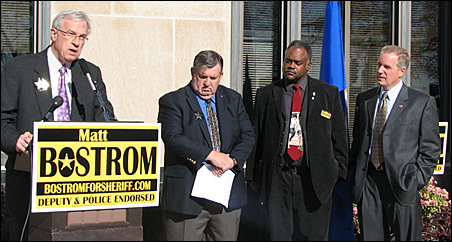 “The key issues of trust, professionalism and integrity are the reasons the law enforcement community in Ramsey County are supporting Matt Bostrom,” Foley said at a City Hall rally for Bostrom. Former St. Paul Police Chiefs John Harrington and Finney were there, too, along with current Chief Tom Smith.

Bostrom has support from all seven members of the St. Paul City Council, not too surprising since his father, Dan Bostrom, is a long-time council member and former police officer.

And Ramsey County Board members support Bostrom, too.

“I know personally what it’s like to work with Bob Fletcher, and it’s not always pleasant,” said Commissioner Tony Bennett. “I’ve seen bullying and lack of planning, and employment lawsuits brought by deputies who were demoted because they didn’t work on Fletcher’s campaigns.”

Although the sheriff’s race is nonpartisan on the ballot, Bostrom has the DFL endorsement. But Bennett is a Republican, as are Bostrom supporters Tom Heffelfinger, the former U.S. attorney, and Bev Aplikowski, chair of the district GOP and a former Arden Hills mayor.

“We have an opportunity to change how the department is trusted and viewed,” Bostrom said. “I want to restore the trust and build relationships with diverse communities. And I’ll never overspend.”

For his part, Fletcher says he doesn’t look for partisan support. “There’s always some implied debt, and it’s only a source of problems,” he said.

Fletcher points to success with reduction of meth use and outreach to the Hmong community. Next, he’d like to work more closely with leaders of the Somali community to reduce youth crime.

“I’m proud of the things we’ve done,” he said. “My opponent hasn’t raised any issues of substance pertaining to the public safety of the citizens of Ramsey County. They talk about more collaboration, but we already collaborate with more agencies than any other department. We have extreme collaboration on a daily basis.”

Nearly 500 people work in the sheriff’s office: there are about 225 sworn officers, 125 correctional officers and about 100 civilian employees. The office runs the jail, protects county courtrooms and operates many crime-prevention initiatives.

The two metro daily newspapers have agreed on their choice.

The St. Paul newspaper, which has endorsed Fletcher in the past, gives the nod to Bostrom this year:

He promised to be a professional, rather than a political, sheriff (we note, however, that he’s running with the endorsement of the DFL, almost every local DFL office holder, and that of several prominent Republicans). He talks about his commitment to “community policing” and to building a force that reflects the communities it serves.

The gist of Bostrom’s campaign is that the sheriff’s office needs both tighter reins and better connections with other agencies and jurisdictions. He’s right. Trust in law enforcement is hard to build and easy to lose. Budgets are tight and will remain so for years to come. The job of every public-sector leader must include pinching and scraping and finding smart ways to stretch resources — including sharing services and facilities and people, wherever possible. Bostrom is well positioned to lead well in this environment, and that’s why he has our support.

The Minneapolis paper, too, endorsed Bostrom.

Fletcher has done a decent job with the basic duties of the post — managing the jail and water patrol and providing law enforcement for several suburban towns — and we have endorsed him when he has had less formidable opponents. That’s not the case in this election. Bostrom would bring a fresh approach to leading the department.