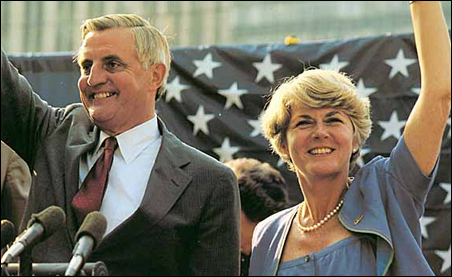 Courtesy of the Minnesota Historical Society
Mondale and Ferraro in 1984: ‘I thought that putting a woman on a major-party ticket would change American expectations, permanently and for the better.’

This second excerpt from “The Good Fight: A Life in Liberal Politics,” by Walter F. Mondale with David Hage, begins in late spring of 1984 as Mondale is campaigning for the presidency. He has just locked up the Democratic nomination to run against incumbent President Ronald Reagan.

While I was fighting it out with Gary Hart and Jesse Jackson, Reagan was gradually gaining momentum. By the spring of 1984 the economy had recovered from the 1980-1982 recession, and Reagan’s polls, which had dipped into the thirties for a time, were recovering nicely. It was Morning in America and he was pretending that we didn’t exist. By June, as we prepared to head to San Francisco for the Democratic National Convention, I had wrapped up enough delegates to win the nomination, but I was also twenty-five points behind Reagan.

I told the staff that during those few days in San Francisco we would have to do something dramatic while we had the nation’s attention. That’s when we started thinking about the choice for a running mate. Gary Hart had proved extremely popular in some parts of the country, and some friends told me I could unite the party by bringing him onto the ticket. But I had watched Hart carefully during the campaign. I didn’t think he and I agreed on the key issues, and our personal relationship had become edgy. I decided to cast the net wider.

During my four years with [President Jimmy] Carter, I had admired his methodical approach to big decisions, and I thought he had developed a good candidate-selection process in 1976 — narrowing the field of running mates to a list of finalists, then inviting each of us to Plains for a personal meeting. It was transparent and open, which voters appreciated, and it enabled him to get a feel for the personal chemistry with each of us. But I also wanted to use the selection process to send another message, a message about opening doors. That’s what my whole career had been about and now I had a chance to do it on a big stage. We used that stage to showcase talent from all parts of the party — Tom Bradley, the mayor of Los Angeles, Dianne Feinstein, the mayor of San Francisco, Lloyd Bentsen, a respected Texas senator, Henry Cisneros, the mayor of San Antonio, Martha Layne Collins, the governor of Kentucky. 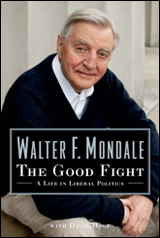 Not everyone saw it the way I did. Several newspaper columnists thought the parade of candidates to my home in North Oaks, Minnesota, had been tokenism. Jesse Jackson was still feeling a little tender from the primary campaign, and he told reporters he thought it was a charade. Others saw a cliché about the Democratic Party — a black candidate, a Hispanic candidate, a female candidate, and so forth.

In the end I chose Geraldine Ferraro, and I was satisfied with the process. First, I thought she would be an excellent vice president and could be a good president. She had already developed a strong record in the House of Representatives. Tip O’Neill, who knew all the young members, said Ferraro would be the best choice. She’d been chair of the Party Platform Committee and knew the issues. She also brought a lot of political strengths to the ticket. The Democratic constituency was shrinking and the departure of the Reagan Democrats was killing us. I had worked hard in the ethnic communities to try to reconnect with them, and Ferraro’s biography helped make that connection. She came from Queens, New York. She was a Catholic and a mother. And she had a lot of fire.

I also knew that I was far behind Reagan, and that if I just ran a traditional campaign, I would never get in the game.

Joan, too, urged me to choose a woman. As usual, her analysis was straightforward but penetrating. In her view, a female running mate was not so much a symbol or a breakthrough as a natural progression in American politics. Joan thought we were far enough along in the movement for women’s rights that the political system had produced plenty of qualified candidates, and she thought voters were ready for a ticket that would break the white-male mold. She also believed the women’s vote had a considerable new and unappreciated strength that we could tap.

Finally, I thought that putting a woman on a major-party ticket would change American expectations, permanently and for the better. Picking Ferraro was symbolic in that sense, but a symbolic gesture with consequences. Skeptical voters would see what an effective woman candidate could accomplish. Young women could see new horizons open up. Everyone would see how America had changed in our lifetimes, and more doors would open. …

The irony of that race, the mistaken irony, is that I was often depicted as an old-style liberal leading a Democratic Party of the past. I think 1984 proved the opposite. After two decades, the internal reforms we adopted in 1964 were coming to fruition: We had a woman on a major-party presidential ticket for the first time. We had an African-American candidate who contended competitively for his party’s presidential nomination. We had a convention whose delegates fully mirrored the diversity of America, and a party where all Americans could participate with genuine power and influence.

This was not a party of the past, this was the party of the future. This was a party that recognized the fundamental changes occurring in America with respect to race and gender, that rewrote the rules of politics and opened doors that will never be closed again. Columnist Tom Wicker of the New York Times saw as much. Writing from San Francisco, he observed, “What happened to Mrs. Ferraro and Mr. Jackson here may also be the most dramatic evidence yet that the modern Democratic Party has become a new instrument in American politics. … A step has been taken, a door has been opened. The order of things — not just transient events but the human environment in which events take place — has changed.” 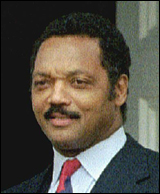 What happened in San Francisco in the summer of 1984 didn’t merely lift Geraldine Ferraro and Jesse Jackson to extraordinary heights; it didn’t merely create new opportunities for a cohort of women and people of color in politics. It changed the expectations of every generation that followed them and allowed them to see America as a different and more hopeful place. Young women, young people of color who might otherwise have assumed they had no place in the upper tiers of American society, now understood that they did. The rights to participate in politics and society were no longer abstract; they were connected to the power to assert them.

Wicker, himself a great chronicler of the civil rights movement, observed in San Francisco, “In the long future power will be more avidly sought by and more widely distributed among those who in the long past could only suffer its consequences.”

As I have argued from my earliest days in politics, this wasn’t merely a breakthrough for women and people of color, it was a gain for all America. A nation is stronger when it can tap all its talents, and when all its citizens feel they have a stake in its success. Wicker’s colleague Flora Lewis noticed the same thing that summer, writing, “America has grown up enough to be able to consider a woman, a black, perhaps a member of any of the minorities besides WASPs, as a possibility, without automatic shock. That is a solid achievement. It is a gain for all Americans, not just because it offers a new source of pride for special groups. But because it enlarges the resource of talent on which the country can expect to draw leadership.”

The Mondale-Ferraro ticket was treated as a breakthrough in American politics, and it was. But that ticket, and the convention that embraced it, was also the fulfillment of a long struggle, a milestone on a long march toward an America that is fairer, bigger, more inclusive, and stronger. The strides we took that year affirmed that America is capable of progress. They flushed old poisons from our system and replaced them with new ideals. They reminded us of who we are as Americans and whom we have always aspired to be.

From THE GOOD FIGHT by Walter F. Mondale with Dave Hage. Copyright © 2010 by Walter Mondale. Reprinted by permission of Scribner, a Division of Simon & Schuster, Inc.

Tomorrow: Mondale reflects on the profound transformation brought about by his and others’ work to outlaw discrimination and expand opportunity.

Walter Mondale will discuss “The Good Fight” onstage in conversation with Garrison Keillor at 8 p.m. Monday, Nov. 22, at the Fitzgerald Theater in St. Paul. For details, go here.

• Dec. 7 at 7 p.m. at St. Anthony Main Theatre in Minneapolis. (This showing is sponsored by the Japan Society. For more information on parking and directions, go here. You may contact JASM for reservations at 612-627-9357 or jasm@us-japan.org.)

‘The Good Fight’: With Humphrey leading the charge, the 1948 election became a turning point in Minnesota’s political history

In this first of three excerpts from Walter F. Mondale’s new book, Hubert H. Humphrey emerges as an extraordinary leader who “didn’t simply establish himself as a leading figure in national politics, he built his state into an admired incubator of progressive ideas.”

‘The Good Fight’: Mondale picks Ferraro — ‘A nation is stronger when it can tap all its talents’