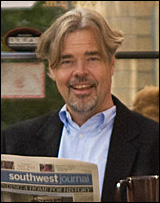 Jay Walljasper is a Minneapolis-based journalist, urbanist, and connoisseur of the shared pleasures of life. For many years he edited the Utne Reader; today he writes and lectures worldwide about cities, neighborhoods, and ingenious solutions to contemporary problems. (He took The Line on a video tour of one of his favorite St. Paul neighborhoods in our June 9, 2010, issue.)

His most recent project is a book that explores what for many of us is a new concept: the commons. All That We Share: A Field Guide to the Commons, which he edited and to which he contributed many essays, is a publication of On the Commons, a Twin Cities nonprofit dedicated to promoting this concept. The commons, according to Jay and his collaborators, has the power to reach beyond much of the sterile left-right struggle of our day toward new solutions of our dilemmas based on a simple but powerful premise: that we can recognize and build on what we share (and what unites us) rather than what is ours privately — which ultimately can’t help but divide us. And our own twin towns have a head start in this direction, thanks to their tradition of public spirit.

I talked with Jay in two different cafes in Minneapolis — the aptly named Common Roots on Lyndale, and at Jack’s, not far from Jay’s house in the Kingfield neighborhood.

Jay: The commons is what we share and how we share it. There are a lot of things in our lives that are rightly private and individual. We don’t want to have collective underwear or shared toothbrushes. But there are things that don’t make sense done in a private-property way. The classic example is public health. You can be the wealthiest person in the world, yet your health depends on the health of the people around you because you’re breathing the same air. It doesn’t make sense for us to be filtering our own water. The safety of your neighborhood is a commons. The streets and the parks. As you start looking you realize this is a pretty large sector of our lives and a pretty important sector.

Much of human knowledge is a commons. Scientific knowledge is a commons, and the entire market economy depends upon the commons. You need to have a legal system, you need to have regulations and enforcement by a government. You need a police force and courts. As one of my colleagues, Peter Barnes, points out, even basic accounting is a commons. You don’t pay a royalty when you use the double-entry bookkeeping system. That’s something that someone invented and it became a gift to all of humanity.

One of the articles in the book is “Who Responsible for Google’s Success?” Certainly the two guys who founded Google deserve an ample amount of credit. But you look further and you see other things. Larry Page graduated from East Lansing High School. A public school system, paid for by tax dollars, helped educate this young man. Then you look at all the money from the federal government that went to build the computer industry. Then there’s the internet itself, which is indisputably a commons — so far. Without the internet, which our tax dollars created, Google would be worth less than a cappuccino at McDonald’s. So let’s not take anything away from Sergey Brin and Larry Page, let’s just broaden our idea of who the creators and investors and stakeholders are in things like Google.

A very flexible concept
Jon: That’s a mixed bag of things — some of which really are free and some of which involve taxes. Much of it is government.

And it can accommodate elements of the private sector. There’s some interesting research that’s been done on POPS — privately owned public spaces, which legally are private property, but function as a commons. We’re sitting right now in Java Jack’s in Minneapolis. It’s an eatery and a bar — but I think if you asked most people what they like about it they would call it an indoor town square. And the people who started this business understood that they weren’t so much in the business of serving bagels as giving people a place to gather. 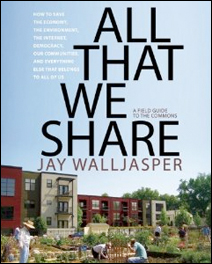 Another of the stories in the book is about a guy named Reginaldo Haslett-Marroquin, who lives down in Northfield. He’s an entrepreneur, one of the founders of Peace Coffee, and a Guatemalan immigrant. He wondered what he could create to boost the prospects of immigrants in Northfield, and also show other people that immigrants aren’t taking something away from the community, they’re contributing something. What he came up with was a chicken co-op.

Everybody understands that local food is healthier for people and for the economy, but local food is also really expensive. Yet here are all these immigrants who were farmers back home, working in jobs that don’t use those skills. So he created this co-op where they raise delicious chickens that are less expensive than the local, organically raised chickens you find in the grocery store. The community benefits and the immigrants benefit. And it’s a cooperative, so there’s not a single owner; but it’s part of the market economy and it’s not getting government funds.

The commons isn’t just the stuff we share — it’s also how we share it. It’s a world view. It’s a way of thinking and cooperating as much as it’s the literal things we pass back and forth and use together. The commons has to do with goals. The goal of Marroquin’s project is shared prosperity and access to tastier, better food, as well as private profit. Actually, there are probably very few people, even among hard-nosed businesspeople, who would say, I’m strictly about profit. Most also feel that they are bringing a service to the world.

“Commoning” to find solutions
Jon: So they would be “commoning” to the extent that they were public-spirited.

Jay: Yes. The commons is to some degree about breaking down these barriers between public and private, between yours and mine, between government and the market. As I was doing the book, the thinking within the organization, On the Commons, evolved. In the beginning it really was all about defining what is the commons — but then we began talking about “commons-based solutions.” The commons becomes the hinge for a new creativity in solving problems and embracing opportunities.

One of the  mistakes we’ve made in the last thirty years — not just here but all over the industrialized world — is to believe that the market and privatization is the solution to all problems. Margaret Thatcher famously said, “There is no alternative.” Well, now, it’s basic truism about are planet that ecosystems that are diverse are healthy. The message of the commons is, let’s look at the whole tool kit. As we face more and more political gridlock, public revenue crises in cities and states, and the bankruptcy of a lot of old ideas about solving our problems, there is a void that commons-based ingenuity could fill.

Our own commons
Jon: Where is some of the commons strengths in the Twin Cities?

Jay: We do share a sense of the commons, more than many other communities. Some of this, I think, just comes from our cold weather. If someone passes out in a ditch in Tampa, they’ll wake up the next morning with a really bad hangover. Someone falls asleep in a ditch in winter in Minneapolis, they don’t wake up! If you’re walking past that person, you feel an obligation.

And I think that one of the reasons that we are the productive, innovative center that we are goes right back to our sense of the commons. Why do we have the Guthrie Theater or the Vikings? It’s because any number of people, who were in many cases business competitors with one another, pulled together with a sense of the common good and common goals, and said, we need to have these things for the sake of the community.

Look at the University of Minnesota and the MNSCU system, and our great system of public education, which, however, has declined somewhat in the last 20 years. Important  developments like taconite and the Honeycrisp apple — these things were not developed by some entrepreneur working alone in his garage; they were the results of a publicly funded university bringing people together to work for the common good.

Paul Wellstone had a great line: We all do better when we all do better. This is really what seeking the common good means. I think you see this borne out in a lot of economies in a lot of places. When there’s a great divide in income levels and in opportunities for people, many of those places don’t succeed as well as places where the divide is less pronounced. We have notable pockets of economic disparity in our towns, and Minneapolis lacks great civic gathering places — St. Paul has Rice Park — but on the whole we are ahead of the game in coming to embrace the commons; there’s strong bedrock here on which to create commons-based solutions.

Jon Spayde is Managing Editor of The Line. This article is reprinted in partnership with The Line, an online chronicle of Twin Cities creativity in entrepreneurship, culture, retail, placemaking, the arts, and other elements of the new creative economy.

The Commons: Minneapolis author Jay Walljasper on seeking the common good beyond left and right