Toni Stone likely will never have a plaque in baseball’s Hall of Fame in Cooperstown, N.Y. But on Saturday, the story of a St. Paul girl who grew up to be the first woman ever to play in a major professional baseball league — the Negro leagues — will again be told at baseball’s shrine.

Martha Ackmann, a professor in gender studies at Mount Holyoke College and the author of the book “Curveball, The Remarkable Story of Toni Stone,” will be presenting Stone’s story at a “Salute to Women in Baseball” program.

In a bit of historical irony, the story of the All-American Girls’ Professional Baseball League will also be told. (That’s the group that was featured in the 1992 Tom Hanks film “A League of Their Own.”) Stone wasn’t allowed to play in that segregated league, which featured white women, playing in skirts, from 1943 to 1954.

Marcenia “Toni” Stone bounced around in various levels of professional baseball for 15 years, the high-water mark coming when she joined the Negro leagues’ Indianapolis Clowns in 1953. Her predecessor at second base for the Clowns was Hank Aaron, who signed with the Milwaukee Braves after the 1952 season. 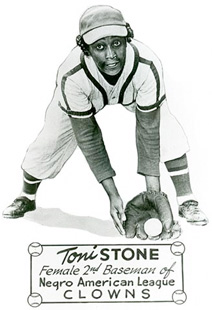 For all her triumphs — she once singled off the mighty Satchel Paige, which she described as “the happiest moment of my life” — Stone often would get teary-eyed telling her story. She was, she said, often rejected by her own teammates, who saw her as a demeaning gimmick used by her employers to help boost attendance, which collapsed in the Negro leagues after Major League Baseball finally integrated in 1947.

Gimmick or deserving athlete?
“Both,” says Ackmann. “I think she was very much a player, but she got a chance because she was an attendance gimmick. Her story is about what happens when you get an imperfect chance to live your dream.”

After one season with the Clowns, Stone played for one of the Negro leagues’ mightiest teams, the Kansas City Monarchs, in 1954.

No season was harder for Stone. The team was managed by Buck O’Neill, who later would become a beloved oral historian of the Negro leagues and the leader of a move to create the Negro Leagues Baseball Museum and Hall of Fame in Kansas City.

O’Neill made it clear to Stone that he did not appreciate her presence on his roster and, even when both were old, turned his back on her.

“The clock was ticking on the Negro leagues,” said Ackmann. “The end was coming fast, and they [male players] were resentful of anyone who might be catching what was left of the limelight. O’Neill had nasty things to say about her. Crude, sexist things. He ground her down.”

Stone might have been a forgotten baseball figure, had it not been for a San Francisco reporter who discovered her living in the Bay Area in the late 1980s and told her story. Members of a women’s history organization in Minnesota saw the piece and re-introduced Stone, whose married name was Alberga, to Minnesota in 1990.

It was a heady return for the woman who had grown up a tomboy in the Rondo neighborhood of St. Paul. She was greeted by members of the St. Paul City Council, she was the grand marshal of a Rondo Days parade, and she had get-togethers with old pals, who remembered her as a skilled athlete in all the neighborhood games. 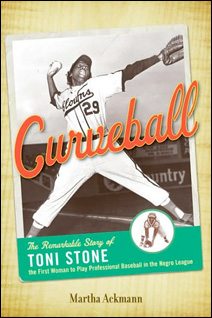 Also in 1990, two exhibits that acknowledge Stone were placed in baseball’s Hall of Fame, one for her play in the Negro leagues and one noting women in professional baseball. In 1993, she was inducted into the Women Sports Hall of Fame.

For all of that late recognition, Stone, who died in 1996 in Oakland, was bitter in her final years because she felt she never was recognized for simply being a very good baseball player.

Her story, says Ackmann, is a history of this country. She had to try to overcome both racism and sexism.

Had she come along in the post-Title IX era, Ackmann said, “she would have gained attention as an extraordinary athlete. College doors would have opened to her.”