Rep. Michele Bachmann will have to give up some turf. Thousands of Minnesotans who call John Kline their U.S. representative will have to look to someone else. And the vast congressional districts in Minnesota’s two northern corners will have to grow even larger.

The politically charged process of drawing Minnesota’s election boundaries officially began this week. On Tuesday, the U.S. Census Bureau shipped data collected in the 2010 census to Gov. Mark Dayton and legislative leaders from both parties.

That release triggers the process of redrawing political boundaries from the state’s eight congressional districts right down to our home precincts.

The population shifts driving the need to redraw political lines were expected even before the 2010 head count was released this week. Population clearly had boomed in the suburban and exurban areas north and south of the Twin Cities. It grew much more slowly in the urban core and the rural areas.

What the census numbers confirm is that Bachmann’s district — Minnesota’s 6th — now is home to 759,478 people, according to Minnesota officials who received the data first. The district includes most or all of Benton, Sherburne, Stearns, Wright, Anoka and Washington counties.

Another growth hot spot was Minnesota’s 2nd, currently represented by Kline. Its population stood at 732,515 on census day last year. As drawn in the last round of redistricting, it contains all of Carver, Scott, LeSueur, Goodhue and Rice counties as well as most of Dakota County and a good chunk of Washington County.

In order to balance representation in Congress, each Minnesota congressional district would have to include 662,991 residents for the next decade.

So clearly, thousands of people have to be cut away from those two districts.

None of the other six districts grew as fast as those two, and so all of them will have to gain people to achieve the target balance. Those needing the greatest gains are the 4th and 5th districts centered on the core of the Twin Cities.

Here’s a look at the number of residents that will have to be added or subtracted to balance the population of the state’s eight congressional districts. Two districts — the 2nd and the 6th — will have to lose residents. 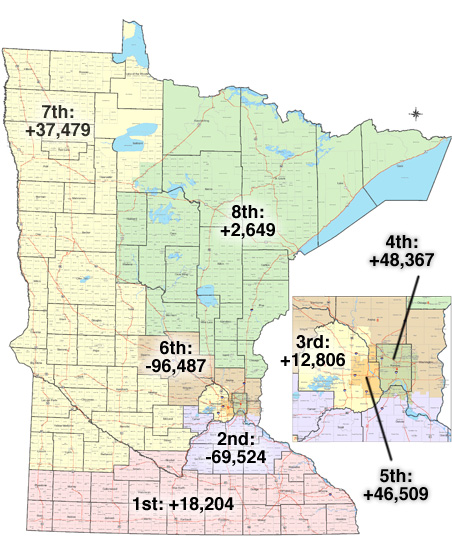 Should the Legislature do it?
There are many ways to slice those blocks of voters, with many different possible political results. Republican-led legislative committees already have begun listing priorities for the lines defining the districts for members of Congress and the Legislature.

They do so amid intense debate over whether legislators and the governor should make decisions that could very well determine their own political futures as well as their parties’ clout in Washington.

Respected leaders with various political leanings have called for a panel of retired appellate judges to draw new district maps and submit them for approval by the Legislature.

For background and a convincing argument on that debate, see this article in MinnPost’s Community Voices by Mike Dean, executive director of Common Cause Minnesota.

A counter argument comes from Republican leaders in the Legislature who say they are committed to doing the job with an even hand and with broad input from around the state.

“Republicans in the Minnesota Legislature will now begin their work on a balanced redistricting plan, and we remain committed to a fair and open process taking population trends and demographic shifts into account,” Republican Party of Minnesota Deputy Chairman Michael Brodkorb said in a statement on Wednesday.

“Leadership in the House and Senate take this constitutional responsibility very seriously and look forward to the opportunity to work hard on behalf of Minnesota residents,” he said.

Forty years of failure
Perhaps the most pragmatic argument for handing off a good share of the duties to a judicial panel is the fact that the Legislature and the governor haven’t been able to agree on a new district map for 40 years.

“There has been a failure in the process which puts the Legislature in charge subject to signature by the governor,” state Sen. Larry Pogemiller, DFL Minneapolis, said during a recent forum on the subject at the University of Minnesota’s Humphrey Institute.

By a fluke, the Legislature’s maps slipped past the governor in 1991. Then-Gov. Arne Carlson didn’t veto the plan in time. But the whole matter still went through court battles.

So it’s fair to ask whether the Legislature is wasting time during a crucial session on a futile exercise that ultimately will end up in the courts anyway.

Another worry is that incumbents empowered to draw their own districts will be tempted to trade off voters so that both Republicans and DFLers solidify hold on their separate turfs.

“My concern is that we will become a lot more polarized in our politics and that doesn’t necessarily lead to good balanced government, to good balanced decision making,” Steve Sviggum, a former Republican speaker of the Minnesota House, said at the Humphrey forum.

“When you draw districts that favor one party over another or one person over another, you tend to get more polarization in the Legislature,” Sviggum said.

Strict deadlines
Whatever the state officials do, they face a strict deadline for finishing the job. Legislative and congressional districts must be drawn 25 weeks before the next state primary. The Legislature’s deadline is 1 p.m. on Feb. 21, 2012.

Next, cities must set the lines for precincts and wards by April 3 next year.

Finally, the lines for county commissioners, school boards and various local districts must be done by May 1, 2012.

That would set everything in place in time for candidates to run in the state primary, which is set for Aug. 14, 2012.

Messy reality
If only the process could be as tidy in reality as it is in the law!

The messy reality is that some cities may have to redistrict more than once because they will have local elections coming up before the deadline for the state’s larger plan.

This is an intricate process. Even when done by an impartial panel, it can be tricky work.

Last time around, one precinct boundary cut through an apartment building in Edina. Voters who carpooled with neighbors from across the hall found themselves in the wrong polling places. That caused enough confusion that the Legislature had to straighten it out.

Another precinct in Chanhassen covered an industrial area where no voters lived. Still, ballots and all of the other trappings of voting had to be prepared for Election Day.

Beyond gerrymandering
Minnesota has not seen the blatant gerrymandering that left political districts in some other states shaped like spoons, pretzels and other assorted bizarre twists.

While Minnesota may be relatively clean in that regard, everyone engaged in the process knows that subtle shifts in a line here and a boundary there can wreck a political career and tilt partisan advantage.

Spots to watch include:

• The southern Minnesota congressional district represented by Democrat Tim Walz. The district, Minnesota’s 1st, has been a partisan revolving door over the decades sending a Democrat, then a Republican and then again a Democrat to Congress. Walz won his third term in 2010 with 50 percent of the vote. If the district takes on thousands of voters carved away from Kline’s bedrock conservative territory, that wouldn’t help Walz’s hold on the seat.

• The line between Bachmann’s 6th District and the one to the northeast of it where Republican Chip Cravaack ousted veteran Democrat Jim Oberstar in 2010. If that northeastern district, Minnesota’s 8th, dips down to include St. Cloud, that could set up former state Sen. Tarryl Clark to challenge Cravaack in 2012. Clark, a Democrat who lives in St. Cloud, ran a strong but unsuccessful race against Bachmann in 2010. Of course, a few DFL Iron Rangers also could take aim at Cravaack.

• Core Twin Cities districts represented by Democrats Keith Ellison and Betty McCollum, which did not grow nearly as fast as outlying metro areas. Their lines may need to reach further into the suburbs. That could be interesting for Republican Rep. Erik Paulsen whose congressional district, Minnesota’s 3rd, wraps around the central area through western suburbs.