Part two in a series
Almost as soon as Lyndon B. Johnson moved into the Oval Office after President John F. Kennedy’s assassination, the political prognosticators began speculating about Johnson’s running mate in 1964. They all put Humphrey on Johnson’s short list, but they knew that the decision about the No. 2 spot on the ticket would be a very personal one for the wily president — who would play his political cards very close to his vest.

Soon, Humphrey’s friends and supporters were badgering him with questions about his plans for 1964. “My reply was brief,” Humphrey would later write. “I had no plans. Whatever Lyndon Johnson wanted, Johnson would get.”

Humphrey made no overt moves to seek the vice presidency during those early months in 1963, but he was encouraged by all the speculation about his chances to share the presidential ticket with Johnson. “I savored each favorable comment,” he noted without false modesty, “but was fearful they would push him (Johnson) too hard or too constantly — to the point of irritation or rejection.”

During the early months of 1964, Johnson did signal that he was considering the voluble and energetic Minnesota senator. After Humphrey’s appearance on the television news show “Meet the Press” in March, Johnson made a very public phone call to Humphrey, congratulating him on his appearance. At the weekly legislative breakfasts with Senate leaders, the president went out of his way to praise his Senate lieutenant, even noting polls that showed Humphrey’s strong standing in the polls as a potential vice president.
At one breakfast, the aspiring vice president drew a hearty laugh from Johnson when Humphrey placed a mock-up of a Johnson-Humphrey campaign button under the president’s orange juice class.

Trial balloons from the White House
In the succeeding months, Johnson continued to toy with Humphrey as trial balloons for other vice presidential hopefuls continued to float out of the White House. One day, the name on the balloon might be Connecticut Sen. Abraham Ribicoff. On other days it could be Secretary of Defense Robert McNamara or New York Mayor Robert Wagner and California Gov. Pat Brown. 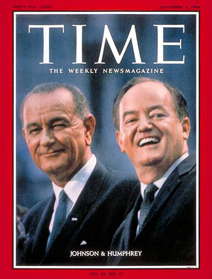 Some supporters of the slain president had hoped that Johnson might consider Attorney General Robert Kennedy, but the late president’s brother was never a realistic option given the enmity between Johnson and the Kennedys.

By early August, all the signs pointed to Humphrey. Johnson himself gave Humphrey some encouragement but never issued a firm commitment. Almost until the end, the president kept the Minnesota senator on tenterhooks.

But then, a new issue emerged that could have threatened Humphrey’s chances. The bi-racial Mississippi Freedom Democrats were threatening to challenge the seating of the all-white Mississippi delegation at the National Convention. Johnson and his supporters were concerned that the simmering dispute threatened to take the political spotlight away from Johnson and his nomination for a full four-year term. Johnson turned to Humphrey, his loyal Senate lieutenant, to manage the controversy and prevent it from blowing up at the convention. Humphrey, in turn, turned to his loyal lieutenant, Minnesota Attorney General Walter Mondale, who was able to arrange at least a tenuous settlement of the dispute that gave the Freedom Democrats some symbolic seats at the convention.

Two senators fly to Washington
Then, as the Atlantic City Convention was getting under way, Johnson flew Humphrey to Washington to meet with him at the White House. In order to throw the press off guard, the president also summoned Connecticut Sen. Thomas Dodd. The Connecticut senator would later issue a statement saying that he did not wish to be considered for the vice presidential nomination.

At about 5 p.m. on the afternoon of Aug. 27, Humphrey was ushered into the Oval Office for a face-to-face meeting with Johnson. At that meeting, Johnson finally asked Humphrey if he wanted to be vice president. “I said, ‘Yes,’ and he (Johnson) asked simply, “Why would you want to have the job? You know it is a thankless one,” the former vice president would later write.

Now that Johnson’s decision was public, it generated widespread approval from editorial writers all over the country. Humphrey’s hometown paper, the Minneapolis Tribune, declared: “In choosing Sen. Hubert Humphrey as his running mate and vice presidential nominee, President Johnson picked for that high duty the best possible man of all the available Democrats.’ The New York Times agreed. “The nomination of Senator Humphrey for Vice President is deserved recognition of capacity, public service and personal growth,” the paper observed.”

National convention delegates in Atlantic City quickly ratified Johnson’s choice, and the Johnson-Humphrey ticket would go on to win a landside victory in November, winning 61 percent of the popular vote that year.

A note of caution
On Aug. 30, 1964, while most political commentators were applauding Johnson’s selection of Humphrey as his vice presidential candidate, one editorial writer was sounding a note of caution.

“Mr. Johnson now has a running mate with very considerable stature. but carries with it the possibility that his happy choice could grow into a monster,” wrote the Tribune’s Richard Wilson. “It is too bad, but it is unavoidable that a man of such abilities should have to be taken out of the mainstream and put on ice, so to speak, for the very reason that he has the ability to be president of the United States. But times require it, and Humphrey, if elected, will have to adjust to this, as well as to make an adjustment to the overpowering personality of his chief.”

Over the next four years, the ebullient Minnesotan would, in fact, have to succumb to Lyndon Johnson’s overpowering personality. At times, that personality would display disdain and even cruelty that would publicly humiliate Johnson’s loyal vice president.

There were good moments, as well, when Humphrey savored his role as the chief advocate for Johnson’s ambitious and far-reaching Great Society agenda. But increasingly, the war in Vietnam cast a shadow over him and his links to the Johnson administration.

Tightening the hold
As the war in Vietnam began to escalate, those ties tightened their hold on Humphrey. He began expressing some reservations about the war at White House meetings, but he found that he had little leeway in departing from official administration policy in public.

Early in his tenure as vice president, he was invited to give a speech at the United Nations on U.S. foreign policy. Johnson permitted him to address the U.N., but only on condition that he permit the State Department to review and revise the speech.

Soon, he found that his reservations were not welcome in White House circles.

“My participation in Vietnam discussions had ended for 1965,” Humphrey wrote.

“No one said. ‘You are out, and here are the reasons why. In the brief span of my vice presidency, I had spoken my mind on Vietnam only in the councils of government, yet the president … apparently thought I had leaked something about the meetings. I had not, but that became irrelevant.”

As the vice presidential years went on, Humphrey came to accept his limited role in shaping the Johnson administration’s approach to the war. “There can be only one foreign policy,” he later acknowledged. “A Vice President cannot sustain a dissenting position. He can express his views firmly if discreetly. But on matters of high policy, once his views have been heard and rejected, he must accommodate to the limited scope of his role.”

A new role
By 1966, Humphrey found that he would have a new international role to play, despite his lack of input in foreign policy-making. Johnson called on him to make a goodwill trip to Asia, which included a stop in South Vietnam. His role was to advocate for political reform in Saigon and to stress the importance regional cooperation for economic advancement in Southeast Asia. Later, he would also travel to Europe to meet with that continent’s leaders who were increasingly critical of the U.S. role in Southeast Asia.

While he was in Vietnam, Humphrey received a briefing from Gen. William Westmoreland, the head of U.S. forces there. He also toured the countryside, where he had an opportunity to speak with U.S. soldiers, civilians and journalists who were covering the war.

“What I saw or was permitted to see of our fighting men confirmed their spirit and their faith that this was a war that could be won,’ Humphrey recalled. “Nothing I saw or heard, however, destroyed my conviction that it was still a political war. … When we left Saigon, I was still troubled by our military rather than political emphasis, unsure that it could lead to ‘victory.’ But I was honestly impressed by what I saw and heard.”

Humphrey returned home from his first Asian trip a staunch supporter of the administration’s war policy, but a second trip in November 1967 planted some seeds of doubt.

“I still believed that Communist aggression ought to be stopped; I did not think the Viet Cong were Boy Scouts on overnight camping trips,” he later disclosed. “However valid our hopes that we could stop aggression, create a democratic society, and secure freedom for people who wanted it — and I believed in them — there was little likelihood that we could achieve them.”

Mounting protests
By now, protests against the war were mounting. Initially, these protests had been centered on college campuses, but they were starting to move into the American mainstream.

Two years earlier, in 1965, Humphrey and Johnson had basked in the glory of the Great Society and the passage of such landmark legislation as Medicare and the Voting Rights Act.

By 1967, there was little glory on the domestic as well as on the international front, as one American city after another exploded in racial violence. Even Humphrey’s hometown of Minneapolis was not spared.

The race riots subsided in the fall, but protests over the war continued and intensified. Approval ratings for the Johnson-Humphrey began to sink as more and more Americans began to side with critics of the war. “Newspapers, news magazines and television commentators explicitly began to convey a sense of stalemate in Vietnam,” noted Carl Solberg. “Television, which had brought the frightening scenes of downtown arson and pillage to the suburbs, also delivered from night to night the blood and mud of Vietnam to American living rooms. It was the first war ever reported by television and the shock was great.” Politically, the events of 1967 were dispiriting a Democratic Party that had triumphed at the polls only a few years earlier.

As the year drew to a close, Humphrey would look back at a time of difficult challenges for an administration that would face the American electorate the following fall. Little did he know what changes the election year of 1968 would bring for him personally, and for the country as a whole.

Loyal lieutenant: On the ticket with LBJ