After 20 years as the head health honcho in Anoka County, Marina McManus will leave the suburban and exurban setting and take her trove of health, medical, public safety and education knowledge to St. Paul and Ramsey County.

“I’m going to arrive listening and learning,” she said. “There’s much more diversity, a much more urban population, so I’ve got many issues to attend to, like learning about the connections and collaborations with people and organizations in the community that are crucial in public health.”

Although Anoka County has a smaller public health department, it deals with many of the same challenges, she said.

“We’ve got a very comprehensive department in Anoka County, in terms of range of programs and services. And we’ve got a significant immigrant community, too.”

That’s one of the big challenges for public health officials in all areas. Some of those new to the country are unfamiliar with preventive medicine and don’t know about – or are uncomfortable with – immunizations.

“The key is helping them understand Western medicine and ways to deal with prevention, like health screenings, immunizations,” McManus said. “We help them learn to seek out health care before they’re sick, and identify some of the health issues before there’s a need for acute or emergency care.” 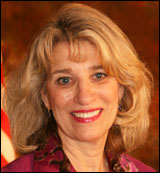 One of the issues she’s worked on in Anoka County was a renewed effort to get children immunized.

Public health officials are concerned that Minnesota’s immunization rate has dropped in recent years, not just with immigrant families but also with families who worry about a possible link to autism, a belief that many studies have shown to be untrue. Other new parents don’t understand the importance of immunizations, both for their own children and the community as a whole.

“We’ve found the right kind of education is to work with community leaders, to show how the health system works in Minnesota. And it works well to look at the entire family on health issues.”

McManus replaces longtime director
McManus, who is often called Rina, has 40 years’ experience in public services. Before her 20 years in Anoka County, she was deputy public safety commissioner under Gov. Rudy Perpich and was nursing director in the St. Louis County Public Health Department.

In Ramsey County, she takes over from Rob Fulton, who was director for 22 years before retiring at the end of last year. He’s remembered as a popular leader who undertook the merger between the county and city public health departments in the late 1990s.

McManus said she’s known Fulton for years: “He built a very positive reputation for this department and left a very strong management team; no one does this alone.”

The region’s public health departments work together on many issues, such as flu shots and emergency planning.

“There’s a familiarity with each other’s business [among metro health departments],” McManus said. “Since we’re all part of the metro area, we have common goals, like primary prevention, working with high-risk families, environment issues, family violence, health choices and behaviors, and emergency preparedness. Of course, everyone has unique and creative ways of carrying out the goals.”

“We’ve had to adjust to a new structure, where everyone is trained to work in first response. That’s grown over the years, from Sept. 11, and is happening nationally as public health works with the Centers for Disease Control and all kinds of public safety agencies.”

McManus said she wasn’t looking to change jobs. When she heard Fulton was leaving Ramsey County, she remembers thinking: That will be a great position for someone.

“It wasn’t in my career plans, and I didn’t apply, but I did get a call and had some informal discussions,” she said. “When they asked if I’d be interested, I realized I was.”

Among her first tasks is getting acquainted with the many nonprofits that work with the county to provide health care and education. “We work with many in Anoka County, but it’s far more substantial in Ramsey County,” she said.

“I’ve got new relationships to make, and learn all the day-to-day processes,” she said.

McManus, who has a nursing degree from St. Scholastica, is a graduate of the Leadership Program at Harvard’s John F. Kennedy School of Government. She grew up on a farm near Hibbing and now lives in Mendota Heights.

When she leaves for St. Paul, Laurel Hoff, Anoka County’s director of public health nursing, will serve as interim director of the department.