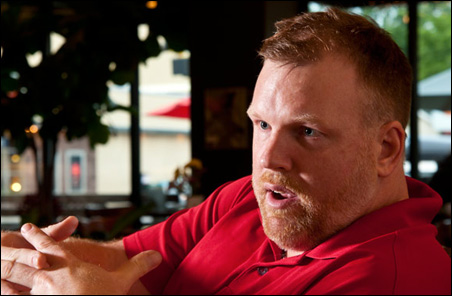 Photo by Bill Kelley
Peter Musty: “We tend not to design and grow whole neighborhoods, and the neighborhoods we do plan grow slowly.”

“As an urban designer,” says Minneapolis-based Peter Musty, “I work with people who believe that design can be applied to something larger than one building or one site at a time. I work with cities and developers — whoever is taking care to lay out land intentionally.” A new urbanist by conviction, he’s led or contributed to a plethora of projects all over the country, ranging from the design of individual buildings (he was trained as an architect) to infill projects, the redesign of streets, and the planning of entire neighborhoods and “new towns.” The Line sat down with him at the Riverview Café in Minneapolis’ Longfellow neighborhood, where he’s a regular.

The Line: Peter, you’ve referred to “a battle between choice and fate” in the growth of cities: could you explain that?

Peter Musty: It’s about whether we build intentionally, or whether cities just happen to us. I think that the role of municipalities is to build cities intentionally, and at a human scale. For many years now we have been building them as a mere result of our auto-oriented transportation system — building great roadways. But all we’ve been doing is conveying automobiles. Public right-of-way is more than that.

Early in my career it was a question of if we needed to return to a more human scale. I think we’ve passed that point of if and it’s become about how. We’ve come to realize the economic and health consequences of building without thinking about biking, walking, transit.

The Line: In your view, how do the Twin Cities measure up as places for intentional urban design of the type you advocate?

Peter Musty: Compared to the east and the west, our growth here is slower and so our projects tend to be smaller — one urban building block at a time. We tend not to design and grow whole neighborhoods, and the neighborhoods we do plan grow slowly. And government here in the Twin Cities tends to focus on market solutions; the public sector has been leaving it to the private sector in designing neighborhoods and creating walkability.

I don’t want to be hard on Minneapolis, because we do so many things well — but I don’t think there is a clear shared idea here of what an urban designer does and is. In Madison, for example, the municipality takes the lead in laying out neighborhoods on the periphery of the city, in concert with developers. They legalize mixed-use development, then take the lead in making sure it happens.

The Line: Municipalities have a lot on their plates these days — can they really take the lead in designing cities?

Peter Musty: They are struggling, of course. But cities need to be smart about picking the spots to invest in, focusing growth there. Saint Paul has been doing a great job identifying these areas — first the riverfront, now the Central Corridor. They’re putting their money where they will get a bang for their buck. They laid out principles for the Great River plan and stuck to them. And I give credit to Norm Coleman, who was a good mayor for downtown. That investment has paid off.

Minneapolis has a very powerful neighborhood infrastructure, and it’s done some great things too. There’s been good investment on the riverfront on the downtown side of the river. There’s been a collaboration of the public and private sector and the neighborhood on the other side of the river. We’re seeing the resurgence of Northeast. The private sector did a fine job with the ballpark too — they were behind the initiative to keep it downtown.

But there are still some public-realm issues. In Minneapolis there’s still no discernible center of public space. The city has continued to keep activity up in the skyways; it doesn’t have a street level that’s very walkable. Saint Paul has a better balance with its walkable streets.

But I have great hope for Minneapolis; I’m working downtown on a project for the Loring neighborhood. Where they want to focus growth now is on what we are tentatively calling Loring Village — the part of Nicollet where it bends. It’s a community-based plan and we have been working for a year, listening to everybody. People there want the area to grow, but they want to focus it around the streetcar that will hopefully be going through. They want to build a transit-oriented neighborhood pattern, to provide ways for people to live without a car. There are very few parts of our community where you have that choice.

The Downtown 20.5 Plan wants to connect the river to the Walker and they’re asking Loring to figure out how to do that. And the competition for developing the riverfront from downtown northward is a really exciting initiative too.

St. Louis Park is another good example of urban design. Based on a community plan, they identified a place where they wanted to focus growth, and then developments happened. There were pluses and minuses along the way, but St. Louis Park now has a new center.

Deciding the Fate of the Ford Site

The Line: You’re also working on a plan for the Ford site in Highland Park. (Read our article on sustainability goals for the site here.)

Peter Musty: Yes. The conversation we’ve been having is, who takes the lead in planning the development of the site, once you accept that Ford will leave? The city is seeing it as a large extension of St. Paul. There were five plans proposed.

The old concept would have been: Let’s find a large developer to lay it all out and stay with it for a length of time. But I have a hard time believing that we are going to grow fast enough to attract a large developer. Is there a private-sector developer who has the patience to accept slow growth? And with growth in the manner we would want — sustainable, connected to Highland, with an integrated network of streets, not cutting people off from the river but turning them toward it, so that instead of an enclave or subdivision you create a vital new part of St. Paul? That would be the goal. Does a single developer have the interest to stick with that? I doubt it.

My overall thesis is, municipalities need to take a larger leadership role in urbanism. To create a public-realm pattern in a place like the Ford site, a mixed-use pattern focused on transit, and then allow smaller developers to come in — mix different interesting private-sector initiatives into the larger pattern. Make the pattern attractive, and make it very clear and predictable how developers can plug into it.

Why Mixed-Use Can Save Neighborhoods

The Line: Mixed-use creates a vital neighborhood by offering retail stores and other amenities in a walkable radius.

Peter Musty: Yes. But having a variety of building types also allows a neighborhood to become more stable in terms of property values — it’s like a personal investment portfolio.

We’ve overbuilt the single-family house. We have more of them than we’re going to need for a while. Minneapolis has this oversupply; other cities have it worse. And we’re not creating many big families any more — in fact, families are shrinking. One thing urban design can do is look ahead a little bit and see where markets will be, so we can protect ourselves against this kind of overbuilding. A team of interdisciplinary folks looks at a region and sets goals.

The Line: What’s your utopian vision for the Twin Cities?

Peter Musty: I’d love to see our cities grow richly around multimodal facilities. I’d like to see our suburbs get more sophisticated — that is, offer more options. Two books, Retrofitting Suburbia and Sprawl Repair Manual, explain how suburbs can grow more sophisticated by adding housing for empty nesters and seniors, allowing natural centers to emerge, narrowing the streets, providing for transit. That’s been happening in some of the inner-ring suburbs. But we need to get better at it.

The other big thing for me is that everything should be walkable. I’m overweight, and I spent nine months in Rome and dropped so much weight! We need to make walking more than just something we do as a special “workout” thing. We have to engineer walking into our lives, and the best way to do it is to build communities that allow us to do it.

Taking an even wider view, I think it’s okay for America to slow down. We’ve come of age, and we can suspend the frontier mentality, take a breath, and stay still — and still be productive. We’ve done so much in this country. We’ve been growing, growing, growing; let’s relax for a bit. Simmer down and catch our collective breath. We’ve spent so many years quantifying, but now we have the chance to move to a more qualitative experience.

The Line: But can we slow down in the way you suggest and still remain creative and competitive?

Peter Musty: We’re not going to stop leading in innovation — it’s in our nature, in our DNA. Our whole system is set up to be creative. Our whole cultural model breeds creativity. I’m just talking about measuring success differently — in terms of quality.

Jon Spayde is Managing Editor of The Line. This article is reprinted in partnership with The Line, an online chronicle of Twin Cities creativity in entrepreneurship, culture, retail, placemaking, the arts, and other elements of the new creative economy.

Urban designer Peter Musty on our neighborhoods and ourselves