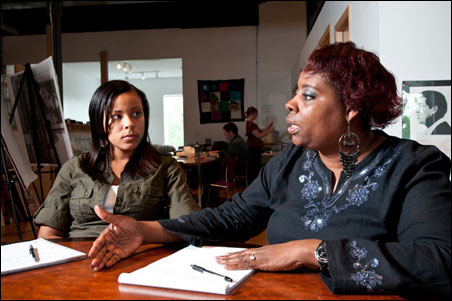 It’s her way of characterizing, with a broad smile, the work of the Minneapolis-based Organizing Apprenticeship Project — an organization, headquartered in a low-rise building in the Seward neighborhood, whose basic mission is to train community organizers and community organizations, and to bring those organizations together to address issues of concern.

Freeman is Senior Organizer for Racial Justice Organizing in the Education Equity Organizing Collaborative (EEOC), one of OAP’s most prominent initiatives. It began in 2006 when, as Freeman puts it, “we just got together with some of our partners — community groups including ISAIAH, Migizi Communications, the Somali Action Alliance — and started talking about education and communities and how we were being divided, and how we could work together, and what united us.”

The Minneapolis School Board asked for the group’s help on a $60 million school funding referendum in 2008. “We said we could not support the referendum until we took a closer look at what the impact of its goals would be on kids of color and American Indian kids,” says Freeman. That closer look convinced the EEOC to support the referendum, but the group also noted that failure to pay specific attention to equity issues would result in unequal educational outcomes.

An impact study of the Minneapolis school reorganization plan called Changing School Options led to the EEOC making recommendations that reduced the negative effects of school closings and other changes on kids of color. The partners that make up the EEOC, including the OAP, had become influential in the making of education policy, and their influence has only grown since then.

The Achievement Gap from a New Perspective

Now the EEOC has taken up the vexed question of the “achievement gap” between white students and students of color in Minnesota from the standpoint of what one EEOC policy brief calls the “equity gap” — disparities in opportunity, treatment, and access to educational advantages within the schools themselves.

The EEOC will work with the Minnesota Department of Education in the drafting of official state guidelines for educational equity.

“Some of the things we are looking at,” says the OAP/EEOC website, “include funding, teaching force and staff, discipline, and school structure, climate, and learning environment.”

“I’m not aware of any other program in the nation right now where a nonprofit like ours is partnering with state education authorities to do that,” says Freeman.

The Line sat down with Freeman and with Hillary Rodgers, who is Organizing Research Associate at OAP and the lead on the Equity Builders Campaign, which solicits input from the community in creating the state guidelines, to discuss the EEOC’s unique new partnership with Minnesota.

The Nuts and Bolts of Equity

The Line: Julia and Hillary, what were your first steps in the current campaign for educational equity in Minnesota?

Hillary Rodgers: One of the things we eleven partners did as a collaborative prior to beginning our campaign was to brainstorm about what we thought our communities and the youth in them would think about these issues. And the majority of the things we brainstormed are exactly what the youth and parents really are thinking, as we have come to know. Things like equitable funding and making sure the school staff is representative of the school population.

The parents in the communities have a deep passion for equity — that was very obvious; it came out in a lot of the responses that we had. It was very powerful that they understood that we cared about what they thought about equity — and that we were going to push that forward in our campaign.

Julia Freeman: It all comes back to the outcomes issue. Equity issues line up with the data of not having equitable outcomes.

Communities of color can get stuck in problems and run low on energy and motivation to continue. But what we found was the hope that people have when they come together and strategize together and have shared learning around equity. When they get an understanding of what equity is and what the impact can be if we achieve it.

See, we consider what we have to be an equity gap, not an achievement gap. And we focus on the institutional aspect of equity.

No Excellence Without Equity

The Line: What’s your hope for the current campaign and your alliance with the state?

Julia Freeman: I’ll read you the goal as we have formulated it: “Our long-term goal is to have Minnesota’s education leadership adopt and implement practices and policies that remove institutional barriers to racial, cultural, and economic equity for kids of color in Minnesota.”

How are we going to get there? We’re going to commit to equity being at the center of excellence in goals and measures.

The Minnesota Department of Education has already agreed to that. We’re going to build a partnership with the department and give them whatever skill sets we have around training or tools, to help remove the structural barriers to equal educational outcomes. You can’t have excellence without equity.

Hillary Rodgers: There are schools we all know of that are considered excellent; they have very high test scores. But if you were to dig into some of the data around their test scores, you’d see that there are huge test-score gaps between students of color and white students.

The Line: What are the touchstones for equity as you see them?

Hillary Rodgers: I would say that they’re more like themes that have emerged. They’re not ready to be put in measurable form yet. Several themes have emerged in conversations with community members: they would like to see staff that is representative of the student population. They would like to see equitable representation of students in special ed and in disciplinary procedures; it should be proportionate, and right now it’s not. Making sure that curricula are reflective of all backgrounds, so that all students can see themselves in their learning. Making sure that there is parent and community involvement and that all students are adequately represented in advanced placement and high-rigor classes. These are some of the big themes.

A Spur to Creativity

The Line: It sounds like it will take a lot of work on the schools’ part to make sure these things happen.

Hillary Rodgers: One of the things that stops schools from doing this is that they believe it is too hard. I think the hardest work of all is changing some of the attitudes of the schools, and that’s why we are very focused on the institutional piece. There’s a trickle-down effect if everyone sees that it’s coming from the institutional level. If Minnesota is committed to equity, we are going to have districts and schools that are committed to it.

Schools and districts don’t need another test-driven mandate! Doing it the way we’re doing it takes it off the backs of the kids — as if the kids were the problem and we have to keep testing them and pushing them because they aren’t smart enough — and gives the schools a chance to be more creative in how they can educate the kids based on some of these measures we are talking about.

And guess what? There’s some good stuff going on around the state around equity. It’s not necessarily recognized or lifted up, but it’s happening. Schools are doing equity walks, starting equity teams, and so on.

Hillary Rodgers: Yes, a lot of districts are recognizing equity. Minneapolis and Saint Paul schools both have equity departments. We know Robbinsdale has an equity department and they’re doing equity walks. Osseo and Roseville too — and others. One of our partners, the Hmong Organizing Program of Take Action Minnesota, have been able to get Hmong curriculum content embedded into the history curriculum in the Saint Paul public schools. That’s a huge victory for equity that came because the school system was able to work with the community.

The Rochester public schools worked with the Rochester Diversity Council to create a SmartKids program that’s helping to close gaps in their schools and raise parent involvement. There’s a collaborative model that Saint Paul Public Schools are using with their ELL [English Language Learner] students. They’re not using the “pull-out” model with ELL kids; they’re making sure those kids are still able to be in a mainstream classroom. And Saint Paul is doing a very good job of raising the achievement level of ELL students using that model.

Julia Freeman: We have to build public will for equity and convince people that equity is really doable. Some people think equity is never going to happen, that’s it’s some pipe dream.

Hillary Rodgers: And along with building the public will should be the realization that equity is important for each and every Minnesotan. In order to build a more vibrant and vital Minnesota, we need equity — as our population changes and shifts. And even if the population weren’t changing and shifting, we would still need to make sure that equity was a priority for a vital state.

Achieving it is not an insurmountable task. Our research has shown that if we can raise the achievement level of just 60,000 students in Minnesota, we can close the achievement gap as it’s measured by one major test, the Minnesota Comprehensive Assessment II. Compared to the number of students of color in Minnesota, that’s a  small number, and we know that it is doable; we just need the public will around equity.

Julia Freeman: We know where all these kids are. We’ve met many of them and we’ve done the research. When you break it down and hone in like that, it really becomes doable.

Jon Spayde is the managing editor of The Line. This article is reprinted in partnership with The Line, an online chronicle of Twin Cities creativity in entrepreneurship, culture, retail, placemaking, the arts, and other elements of the new creative economy.

‘The achievement gap is an equity gap’