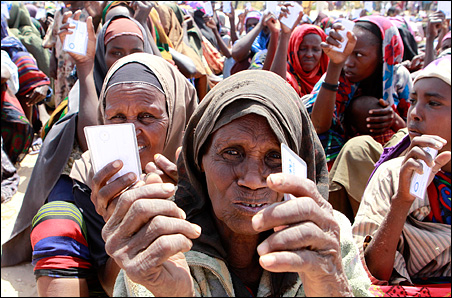 A forum focusing on the humanitarian crisis in East Africa — where more than 12 million people face starvation — drew a combination of crowd reactions Wednesday: cheers for word of new relief efforts, and rapt silence during descriptions of the desperate conditions there.

A group of Democratic congressional heavyweights gathered in Minneapolis — the center of Minnesota’s Somali community, the largest in the United States — to answer questions about how the federal government plans to help handle the crisis.

The situation in Somalia and the Horn of Africa — where thousands more children are expected to die — is expected to get much worse before it begins to improve.

At the session with local nonprofits and many from the Somali-American community, House Democratic Leader Nancy Pelosi called for steady funding to international aid programs even in the face of steep federal budget cuts.

“Now we’re in the middle of a big budget cut, and it might be a very wise statement about values if we recognize that in that budget we should have a sufficient fund to play our leadership role in the world,” she told the forum, which was hosted by 5th District Congressman Keith Ellison at the University of Minnesota’s Humphrey School of Public Affairs.

Pelosi joined a panel of congressional Democrats, including 1st District Rep. Tim Walz and Ellison, and local and federal officials.

Dr. Raj Shah, head of USAID, which in part oversees humanitarian efforts in the Horn of Africa, briefed the former House speaker and others earlier this month about the worsening conditions in Somalia.

New U.S. help on the way
On Wednesday, he announced $23 million in new federal USAID grants — in some cases in partnership with local groups — aimed at providing Somalis with food assistance. The United States has contributed about $600 million to the “absolutely urgent crisis” in East Africa, Shah said.

About $10 million of the new grants will go to difficult-to-access areas controlled by al-Shabab, a militant group tied to al-Qaida that has killed humanitarian workers in southern and central Somalia.

Shah applauded Somali-American communities across the country for their work in helping families during the East African droughts and famine. His agency has consulted with Somali communities in Washington, California and Minneapolis to refine strategies for administering aid. 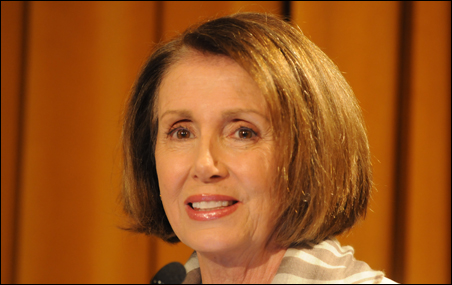 “Much of what we’re doing is informed by what we’ve learned from you — your insights, your passion, your relationships and, in some cases, those of you who have medical backgrounds, your willingness to go and work in a tough environment,” Shah said.

Ellison criticizes ‘international neglect’
Ellison blamed the rise of militant factions in Somalia, at least in part, on international neglect, and he and Pelosi seemed to point to humanitarian efforts as helpful in curbing the rise of extremism. He called the country’s current lawless state a “kind of a libertarian dream-world nightmare.”

“I think that not just the United States but really the entire world has been somewhat in a state of neglect of Somalia,” Ellison said. “I think it’s important to confront this. I can assure you, neglecting Somalia will not ever lead to a solution.”

Even with concerns about food theft and the difficulty of providing relief to militant areas, Shah highlighted emerging democracies across Africa.

“The most acute crisis at the famine is particularly in al-Shabab-controlled areas,” he said. “At the same time, though, in Africa and throughout Africa, we’ve seen a great deal of expansion of stable democratic governance.”

But restrictions also come from the United States, something the Obama administration is beginning to change by allowing humanitarian organizations waivers that loosen federal anti-terror guidelines.

The crowd cheered when the new grant money and easier access for nonprofits were unveiled, but silence reigned when Shah talked about the region’s squalid conditions.

He described horribly overcrowded camps populated with Somali refugees. One camp, designed to hold 90,000 refugees, now is jammed with 460,000 people, and it’s estimated that a quarter of Somalia’s population has been displaced by famine. 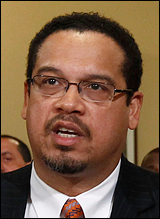 Daniel Wordsworth, president and CEO of the Minneapolis-based American Refugee Committee, said that for Somali-Americans living in Minnesota, the crisis is very personal. For them, he said, hearing about the death and starvation doesn’t come from the media, but from the frantic calls of despairing loved ones.

“It’s a very intimate, very personal thing for many people just sitting in this room,” said Wordsworth, a panel member..

Declining public support for foreign aid — which has been integral to relief efforts in East Africa — is likely to make many with families in Somalia nervous. It’s also troubling to the politicians on the panel.

The three members of Congress defended humanitarian spending, and Walz, a teacher, lamented that the subject of geography is dying in many classrooms and said its study can give students empathy for the rest of the world.

Ellison turned the issue into a political request.

“We need a political constituency to support us when we argue for foreign assistance,” he said. “If you don’t speak up and say, ‘I want my representatives fighting for this,’ then it makes it much more difficult for us to fight for it, so you understand what I’m saying?”

Jaylani Hussein, a board member of the American Relief Agency for the Horn of Africa, said afterward that he wasn’t wowed by the politicians’ words but was pleased at the attention the tragedy there is finally receiving.

For Hussein, it’s all about results.