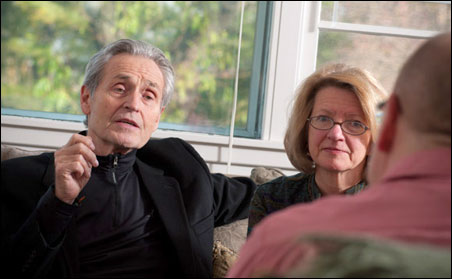 Craig and Patricia Neal’s Minneapolis-based Heartland was founded on an article of faith: that bringing business leaders together for conversation could change the world. Heartland’s monthly Thought Leader Gatherings — the 181st will take place on Dec. 2 — begin with a “Conversation Starter” — an author or other thinker who speaks for 20 minutes. Large- and small-group discussions follow. The sessions are intended to spur and exchange ideas, but even more to cultivate the art of conversation as a means of creating a new consciousness in the participants — an expanded sense of possibility, a lessening of fear, and an increased sense of responsibility for the community and the planet.

The Neals also do consulting and training in what they call “convening” — the facilitation and furthering of this kind of consequential conversation. Their book The Art of Convening was published in February of this year.

The Line spoke with them in their home on the shore of Lake Calhoun.

The Line: Craig Neal, what was the impetus for Heartland?

Craig: We had always been involved in social, educational, and political change, and we noticed that potentially the most progressive institution was business. Because business has the capacity to change, to turn on a dime, because of its financial imperatives.

Patricia: We noticed who was going to Africa to solve AIDS and other problems. It wasn’t the United States government, it was Bill Gates and Bono, organizing coalitions and moving things along a lot faster than an NGO or the Red Cross or a government. And so Craig began to ask the question — how did you put it?

Craig: Could leaders be the conduit and organizations the delivery system for a global renaissance?

Craig: Not just corporate, for-profit leaders. Leaders of anything that is run like a business. Hospitals are run like businesses, as are many colleges and universities. Business no longer means only for-profit, only corporate.

The Line: And in philanthropy, there’s the phenomenon of the B-Corp and the social entrepreneur.

Craig: Right. We saw back in the late ’80s that if we really wanted to effect change, or transformation as we call it now, we would have to play with the leaders, the people running the organizations. That their change, their personal change, would affect change in their organizations.

A Vision of Conversation

Craig: We created Heartland with this vision: if we created the environment for leaders to have conversations, talk about solutions, we could make a positive shift. In 1998 we went to Seagate and Honeywell and said we’d like to bring together the leaders of the corporate community to dialogue around the compelling issues that face us in our life and our work and see what happens. What could come of this dialogue? They gave us the seed money and we got 40 people together from the leadership of various sectors here in the Twin Cities — and every month since then we have held a Thought Leader Gathering, alternating between Minneapolis and the Bay Area.

Patricia: What we do best isn’t creating things ourselves — it’s bringing people together who are interested in catalyzing things in their own communities, whether that’s a business, a local community, or a nonprofit. A Thought Leader, to us, is anyone doing that. A leader, to us, may not be one of the usual suspects — it’s anyone who, in their own capacity, wants to make a difference towards this transformation we’re talking about.

The Line: Can you describe the transformation?

Craig: Transformation is a lot more than change. There’s change going on all the time, and it’s usually a recycling of old patterns. Transformation is a change in the essence of something. Political change may simply mean one party replaces another in power. But if you notice what’s happening with both the Occupy movement and the Tea Party, you see that they are both transcending the normal, familiar political positions. What we are after isn’t just changing the political structure or the economic structure …

Patricia: … or even just a commitment to sustainability or social responsibility. Both are important, but we contend that you can change all the systems in the world, but if people haven’t changed in how they relate to one another, if we don’t develop the sense that your well-being and success matters to mine, we won’t have a world that works for the majority of people on the planet. A recognition of how interrelated we really are — when that begins to happen, then systems can really become sustainable.

Craig: What we’ve created is a community of practice for whole-systems leaders. What do we mean by that? People who are not just cognizant of the traditional bottom line. Now the bottom line is a given; things have to work on an economic level. But the economy can no longer be looked at as separate. It has to be seen as tied to the social structure, to the environment, to organized religion — to every aspect of the human condition.

We’ve seen this in the degradation of the environment, and also in our culture, with the emergence of the concept of the 99 percent and the one percent and with all the new conversation about the distribution of wealth. What’s going on here is people are starting to wake up, and I think our leaders are waking up too. Corporate leaders are coming to see the interconnections.

In a Minneapolis speech a few days ago, John Stumpf, the CEO of Wells Fargo, addressed the concerns of the Occupy protestors, saying “I get it.”

Patricia: Which he didn’t have to say. He might have said, “What’s this got to do with my business and my ability to run Wells Fargo?” I think that the shift that’s been happening in as short a time as the past year is this: a conversation is starting.

Craig: And when you create a good conversation where people feel safe, then ideas and possibilities begin to open up and political divides start to break down. This can happen in our gatherings, or inside organizations. We do consulting in which we go into companies and basically teach people how to talk with each other. We call it “the technology of relationships” — what’s the technology that creates conversations that have meaning, depth, and consequence, so that when people are finished with them, they know it’s going somewhere, they feel invigorated, inspired? That’s our life’s work.

From Conversation to Transformation

The Line: How does conversation turn into major transformation? There seems to be a major difference of scale.

Craig: It happens here in a special way. The Twin Cities are a unique place in this country. In a way we’re an oasis. We’re five hours from any other major metro. We have a culture of progressive thought — not only artistic thought but corporate thinking and social responsibility. It comes out of our prairie populist tradition, I think.

It spawned the Five Percent Club, when all of the large family-owned companies — Pillsbury, General Mills, 3M, et cetera, came together, pooled their money, and gave it back to the community. It set the tone, I think, for what is now the socially responsible business movement — globally. I think that movement started right here, with the Minnesota Principles, which came right out of the Five Percent Club. There is a tradition of what we call transformative behavior in our businesses, or society, and our culture. That’s one of the reasons why what we are doing has been accepted here. And it’s one of the reasons we, who came here from the East Coast, stay here.

Patricia: And in just the last few years there has been a recommitment to the principles of the Five Percent Club, with  the Social Venture Partners, with new vehicles of transformational behavior coming into town, like Ashoka, which just opened a chapter here.

There’s a demographic change too, all over the country. The baby boomers who run things are starting to look at their lives and their legacies — what have they done with their lives? And coming up are millennials who don’t do business the old way.

Craig: For one thing, they don’t have the expectation that they’re going to work in any one company longer than a couple of years. And this “Free Agent Nation” that Fast Company talked about a while ago — cycling back and forth several times between working in an organization and being a consultant — is becoming the norm.

Patricia: Millennials aren’t going to give their loyalty to a company the way we did — and I can’t tell you how many people my age I know say “My kid doesn’t want to work as hard as I work!” They’re not going to work a 60-, 70-hour week! They’re going to find a way to make some money but also play, have a life, be with their kids. So demographically there’s a wave coming that supports the idea that how you choose to live your life shows up in your economic activity.

There’s already a shift toward realizing that your economic activity has broader meaning. I just got an email from my very conservative 75-year-old sister, who said, “This Christmas, shop local. It’s the right thing to do.” All of these ideas that people like us have been seeding for 20 years now are starting to show up in different ways.

Is Polarization the Problem?

The Line: And yet we live in a notably polarized political environment that leaves many people feeling hopeless about transformation.

Craig: I’m not so sure about the polarization. I think the media plays it up. I think fear is the real issue. There’s huge fear out there, especially fear of change, and in our work we try to create an environment of no fear.

Craig: A civil conversation with those who differ from us. Most of us don’t think it’s possible, so what happens is, we stop. We don’t even bother because we don’t feel safe. We assume there’s going to be pushback, aggression, conflict, polarization. Many of us sit on our hands and the lowest common denominator, a voice of aggression and polarization, is taken to be the public voice.

For us it’s exciting to engage with these issues of conversation, because as we work, every day we get to see people wake up and say, “I don’t have to live this way; I don’t have to be fearful.”

Jon Spayde is the managing editor of The Line. This article is reprinted in partnership with The Line, an online chronicle of Twin Cities creativity in entrepreneurship, culture, retail, placemaking, the arts, and other elements of the new creative economy.