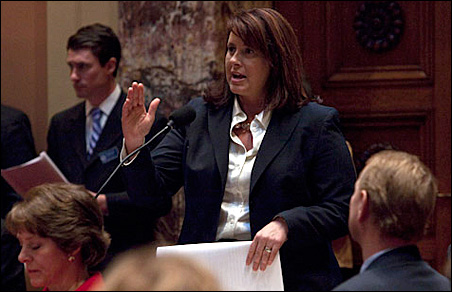 The sudden turn of events surrounding Sen. Amy Koch’s departure as the Minnesota Senate majority leader could put the Republican Party in some ironic spots in the coming months.

On Thursday, the announcement by Koch that she was immediately stepping down as the majority leader and would not run for office in November was treated almost heroically by politicians of both parties.

She was praised as a role model, a wonderful leader, a politician who probably worked too hard.

The story now is roaring off in a new, though, given contemporary politics, not unusual, direction.

In that meeting, she was confronted with allegations of an “inappropriate relationship” with a male Senate staffer. Those allegations were presented to Senate leaders by other Senate staff members at least two weeks ago.

Koch apparently neither confirmed nor denied the allegations.

The word “resign” came up during that Wednesday meeting, but it’s unclear who uttered it and under what circumstances.

When WCCO-TV broke the story of the meeting and the allegations Friday afternoon, Senate leaders called a quick news conference with Capitol reporters.

“We are here with humility and shock,’’ Michel said to reporters.

It wasn’t clear if the senators were in shock over allegations they had first begun to hear recently, or by the fact that the back story to Koch’s decision has become public.

The senators at the news conference — Hann, Michel, Gerlach and Dave Senjem — all said they were surprised by Koch’s Thursday announcement.

Clearly, there is no aspect of this story that’s not difficult for the party, starting with the fact that Koch was popular among senators on both sides of the aisle.

It’s GOP legislators who last session pushed putting a constitutional amendment on the 2012 ballot that would restrict marriage to a man and a woman. The amendment is touted as “protecting the sanctity of marriage” in the eyes of socially conservative Republican legislators.

But proponents of opening marriage to gays and lesbians often have argued that the man-woman marriage has hardly been treated as sacred by millions of heterosexual couples.

If allegations surrounding Koch, who is married, are true, she would become in the eyes of many a prime example of the double standard surrounding the heated marriage amendment battle.

Party’s ‘purity test’ problems
“I couldn’t pass the party’s purity test,” said former Republican state Sen. Paul Koering, who is gay and who eventually lost the endorsement of his own party. “I guess this [the Koch situation] shows what goes around comes around. If you’re going to have a party that believes it’s made up of people of the purest standards, you’re going to have a very small party. The fact is we’re all human and we all make human decisions.”

Koering no longer considers himself a Republican. “There’s not a place for being gay in the Republican Party,” he said. Having lost endorsement in August, 2010, he’s become an independent and is contemplating running as an Independence Party candidate for Senate from his Fort Ripley home.

The double-standard issue surrounding the marriage amendment is not the only one Republican legislators will face as the Koch story unfolds.

Fairly or not, there surely will be many who will question whether a male leader would have received the same treatment that Koch has received. But Michel, an attorney, tried to make it clear that this was about the modern workplace.

The Republican leaders did not say whether ethics charges will be brought against their now-former leader.

As of late afternoon, Koch had not responded to calls from reporters, but on Thursday she said in an interview with the Associated Press that the decision to leave the politics was hers and that she was not forced out.

Ripple effect likely
Couple the Koch issue with the financial woes of the state party, and you have an even more perplexing campaign problem for GOP members who pride themselves on social purity and fiscal accountability.

There’s hardly any part of the political agenda that Koch’s departure doesn’t affect, according to one Republican senator who asked not to be named because of the sensitive situation. Depending on the leader, that senator said, the fate of even such issues as racinos will be decided, the senator said.

Koch, for example, somewhat mildly opposed any form of expanded gambling. There are other potential leaders on both sides of that issue. If the new leader supports racinos, it has a much better chance of passing this session. If the new leader comes from the anti-gambling wing of the party, it’s dead.

“The whole direction of where we’re headed is going to be determined by the new leader,” the senator said.

Latest Amy Koch developments complicate GOP plans across the board