History is always peering over your shoulder in the nation’s Capital, as I was reminded while reading the Washington Examiner last week. There, buried at the bottom of an inside page was a five paragraph story headlined, “Crime History: Congressman talks gunman into dropping pistol on House Floor.”

The story read: “On this day, Dec. 13, in 1932, a department store clerk from Pennsylvania brandished a gun in the visitors’ gallery of the floor of the House of Representatives, demanding 20 minutes to speak on the nation’s economic depression.”

Not until the third paragraph of the on-this-day-in-history feature did I notice that the hero of the story was a 34-year-old lame duck Republican congressman from Minnesota named Melvin Maas who was speaking on the House floor while his colleagues and visitors ran for cover.

According to the House Historian’s office, the 25-year-old man from Allentown, Pa., leaned over the rail of the visitors’ gallery “aiming his .38-caliber pistol at the floor below … as visitors and most members fled the chamber, abandoning a teller vote on an amendment to a Treasury and Post Office appropriations bill.”

But Maas remained on the floor and “standing below the gunman, calmly pleaded with him to drop his weapon. After hesitating a moment, the gunman complied, dropping the loaded and cocked gun into Maas’s outstretched hands,” as an off-duty D.C. police officer and Rep. Fiorello LaGuardia, the future mayor of New York, subdued him.

At the time, it was the worst incident of violence in the history of Congress until March 1, 1954, when four Puerto Rican nationalists opened fire from the House visitors’ gallery and wounded four members and Maas was awarded a medal for heroism. (Asked by a reporter whether he had had experience handling deranged people, he replied, “Why not? I’ve had six years in Congress.”)

Lost bid for fourth term
Maas, who represented Minnesota’s fourth district, including Ramsey County and St. Paul, had already lost his bid for a fourth term in the wake of Franklin Roosevelt’s landslide victory one month earlier. Nevertheless, he was one of Minnesota’s more interesting political figures, I discovered after checking the “Biographical Directory of the United States Congress,” and other sources.

Born in Duluth in 1898, he grew up in St. Paul and graduated from the College of St. Thomas in 1919 after serving in the Marine Corps as a private in World War I, where he earned his wings as a pilot but did not see any combat. He was commissioned an officer in the Marine Corps Reserve in 1925 and in 1926, ran for Congress against a third-term Independent Republican named Oscar Keller, who that year had called for the impeachment of President Harding in the wake of the Teapot Dome Scandal. 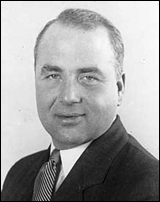 Maas defeated Keller and won two more terms before losing in 1932, but he was reelected in 1934, and served four more terms until losing to Democrat Frank Starkey in 1944. He spent most of his last term as a Marine aviator in the South Pacific.

The 1932 incident involving the gunman in the House gallery wasn’t the first time that Maas made headlines. As a member of the House Foreign Affairs Committee, he had expressed concern about the air defenses of the nation’s Capital. To dramatize his case, he did something that he later described as “downright stupid.”

“That was back in 1931, when some of my colleagues in the House of Representatives scoffed at my notion that an enemy plane could get close enough to bomb the Capitol,” he recalled in a 1959 interview with the Saturday Evening Post. “To show them, I borrowed an old pursuit plane from nearby Bolling Field and made three screaming runs on the skylight of the House while it was in session. Members told me later the vibrations shook some plaster from the ceiling — and emptied the House in record time. Foolish though this stunt was, it proved my point.”

After leaving Congress, he was active in the Marine Corps Reserve, and from 1947-51, was an executive with Sperry Rand Corp. in New York. In 1950, after the Korean War broke out, he was recalled to active duty in the Pentagon as chairman of a Defense Department committee assigned to draft an armed forces reorganization bill.

‘I was stunned speechless’
Then, in August 1951, while testifying before Congress, he developed a severe case of ulcers and was admitted to Bethesda Naval Hospital, where his eyes began to hemorrhage and he soon became totally blind, apparently the result of damage to his optic nerve from a bomb explosion during an attack on Okinawa during World War II.

“I was stunned speechless” when doctors told him he would be permanently blind, Maas told the Saturday Evening Post. “For the first time in my life, at 53 years of age, I faced the prospect of being utterly useless. I was afraid that I would be unable to support my family and would be a burden on them as well. I wondered if my family might not be better off if I were dead and they had my life insurance.”

Nevertheless, Maas decided to rebuild his life. Encouraged by his wife and four children, he began a rehabilitation program at the Veterans Administration Hospital at Hines, Ill. Despite his blindness, he was kept on active duty at the Pentagon because his advice was needed on technical amendments to the Reserve reorganization bill, which finally passed the Senate, wearing full uniform for the next three years until retiring from the Marine Corps Reserve with the rank of major general.

Maas recalled that an Army general once remarked “that I was probably the only general in history to remain on active duty while blind. ‘Oh no, general,’ I said, ‘only the first to admit it.'”

Maas spent the rest of his life in Washington, serving as chairman of the President’s Committee on Employment of the Physically Handicapped and head of the Disabled American Veterans and the Blinded Veterans Association while encouraging businesses to hire handicapped people.

He demonstrated that he could function as well as normal sighted people, traveling without an escort or seeing eye dog to every state and all over the world, and memorizing his speeches and some 200 telephone numbers. He refused to carry a white cane, using instead the collapsible leg of a camera tripod, which could be folded and put into his pocket when he didn’t need it.

“Many people tell me I do not look blind at first glance,” he said, “and nothing tickles me more than to be mistaken for a sighted person. When I go to the hotel dining room, for example, I ask a waiter to read me the menu. One waiter misunderstood and said apologetically, ‘Mister, I’m just as ignorant as you are.'”

Maas was modest about his success in rebuilding his life as a blind person. “Whenever I pride myself on doing well, I hear about somebody who puts me to shame. Three years after my blindness, I confessed some momentary feeling of inadequacy to a 30-year-old acquaintance who has been blind since he was 2, and could do amazing things. He laughed and said, ‘Oh well, you’re just a novice. Wait until you’ve been blind for 28 years.'”

Maas died in Bethesda, Md., on April 14, 1964, when Democrat Joseph Karth occupied his seat in Congress, and is buried at Arlington National Cemetery.