After months of studying Minnesota’s new redistricting maps, Republican consultant Gregg Peppin has made a contrarian prediction about the 2012 legislative elections and who will end up in control. 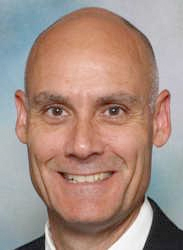 Unlike many political observers, Peppin, a longtime party strategist who has worked on state redistricting plans in 2002, believes the new maps will allow the GOP to keep control of both houses.

Currently, the Republican-DFL legislative split is 37 to 30 in the Senate and 72 to 61 with one vacancy in the House.

“What I will say is that I can envision a scenario where we come out exactly where we are now,” he said. “The map is either a wash or a slight Republican edge. I don’t see this being a huge swing of 10, 11 seats.”

His views contrast sharply with the DFL’s redistricting analysis outlined by my colleague Eric Black here:

“DFL State Chair Ken Martin recently told me that the way his party scores the partisan lean of the new districts, the DFL has at least a slight advantage in 73 House districts and 34 Senate districts. If (a big “if” unless and until it happens) the DFL candidates were to prevail in those districts, it would give the party a substantial (73-61) majority in the House and a bare (34-33) single vote majority in the Senate.”

So, how does Peppin arrive at his conclusion when political observers, media outlets and even fellow Republicans say the new districts give the DFL an advantage in the November election?

Those assumptions were based on the fact that redistricting created fewer open seats, Peppin said. That was predictable, he said, “The previous 10 years of growth has leveled off.

“But just because there weren’t a lot of open seats created in that shift, you do create the little shifts that can mean a lot,” Peppin argues.

He maintains that in the refiguring of legislative districts, the judicial mapmakers took but also gave, adding Republican voters to districts where they will make a difference.

He offers specifics for several Minnesota House races that were close last time:

• King Banaian, R-St. Cloud: “His district lost some city of St. Cloud precincts and gained some township precincts like Minden Township.  This is where it’s 65 percent Republican. You’ve taken a thousand voters out of St. Cloud and replaced them with a thousand in Minden.”

• Patti Fritz, DFL-Rice and Steele counties: “She lost Blooming Prairie — a DFL stronghold — and added more townships in Dodge County. She won by 152 votes, taking 164 votes in Blooming Prairie.  But for Blooming Prairie, she wouldn’t be in the Legislature right now.  In a race like this, this could make a difference.”

On the Senate side, Peppin sees similar tweaks fromt the 2010 races:

• Dan Hall, R-Burnsville, Bloomington: “This improved. With the new lines, he lost Bloomington and picked up Savage.”

• Pam Wolf, R-Anoka County: “She lost Fridley and gained swing precincts in Coon Rapids, so her district went from a lean DFL to a swing.”

Peppin dismisses complaints that judicial mapmakers had a partisan purpose behind their efforts, noting that Minnesota is a difficult state to gerrymander.

“Even on my best day, when I wanted to get really partisan in my redistricting proposals, you can’t,” he said.  With the state’s compact and homogenous districts, “it’s like a balloon. You push it here and it comes out the other side,” he said.

The overview: Legislative boundaries can become less relevant in an election year with an over-arching major theme, scandal, or success.  2012 hasn’t shaped up to be that kind of year.  The economy dominates, but voters have already gone through two elections of bad economic news. Other than the presidential race, they may be desensitized to broader issues. A candidate may need only to address what the voters in his or her county are worried about.

In the 2012 legislative races, for the voter, politics is local — and for the candidate, political success is the locale.