The first call Josefina Franco makes on her first night as a campaign volunteer veers completely off script within seconds.

The man on the other end of the line politely listens to her preamble, delivered in Spanish. Franco is calling on behalf of Minnesotans United for all Families to talk about the proposed constitutional amendment to ban same-sex marriage, which she carefully and faithfully translates for him.

But when she asks how he would vote if the election were today, he says he’s not sure he’ll be voting at all.

Panic momentarily crosses her face. There are prompts on the computer screen in front of her and a sample topics of conversation arranged decision-tree-style on a photocopy on her desk. But they all concern the recipient of the call’s feelings about marriage and gays and lesbians.

Franco frowns at his reply that his vote doesn’t matter. “¿Porque piensa Ud. que so voto no es importante?”

After she ends the call, Franco appeals for help to Christian Ucles, the campaign’s Latino outreach coordinator, who just spent an hour training her and two other volunteers to engage in culturally tailored conversations about gay marriage.

To date, the residents of 31 states have voted to amend their state constitutions to ban same-sex marriage. In each, vote-no campaigns have struggled to find a strategy for combating everything from confusion about the ballot initiatives to the fear generated by negative 11th-hour ad campaigns.

Minnesotans United is trying something different. Research shows that personal exposure to gays and lesbians, particularly those in committed relationships, is how most of those who hadn’t thought about same-sex marriage, were uncomfortable or conflicted come to accept or embrace the idea.

And so the group has spent considerable time figuring out how to facilitate conversations. Its leaders believe voters are 65 percent more likely to vote “no” if they’ve had one.

Franco, who was born in Mexico, and Ucles, who emigrated from Honduras, make up half of the campaign’s second formal Latino phone bank. Together with Guillermo Narvaez, who grew up in Nicaragua, among other places, and Maya Weisinger, who is from New Mexico, they are working their way through a list of Latinos thought to live in state Senate District 65B, which includes St. Paul’s heavily Hispanic west side.

Latinos are the fastest-growing group in the country, and a slender majority — 54 percent — support same-sex marriage. On the whole, their opinions closely mirror those of Americans in general, with religiosity the biggest factor in someone’s stance toward gay rights.

But partly in an effort to divide the Democratic base, the vote-yes campaigns have targeted Hispanics and African-Americans, according to their strategy documents. Members of both communities feel they were unfairly blamed for Prop. 8’s 2008 victory in California.

Franco volunteered for the phone bank because she’s concerned the issue is barely on Latinos’ radar. “The Latino community is not very aware on this issue,” she said. “We are concerned about immigration. After that, the DREAM Act, and then jobs.”

Franco and Ucles talk about her call. Franco doesn’t know whether the man simply hasn’t voted or can’t, and she couldn’t think of a delicate way to find out on the fly. Ucles decides to mark him down as not home so that he will get another call.

The volunteers are working from computer databases known as targeted voter lists. Increasingly useful in an era of razor-thin margins, the lists are derived from voter rolls cross-referenced from an array of different records, typically by address. Google was one of the pioneers of the collection, storage and analysis of “Big Data.”

Depending on the sophistication of the campaign and the firm “agglomerating” the lists, they can contain everything from voters’ ages and political affiliation to a psychographic profile drawn from sources as surprising as the inventories of consumer’s interests found on product warranty cards.

To determine what lists it needs, a campaign first polls to determine its pockets of support and groups with which it is lagging, and then tests the messages that are likely to catch the attention of “moveable” voters. In theory anyway, candidates can pinpoint weak spots in need of shoring up. 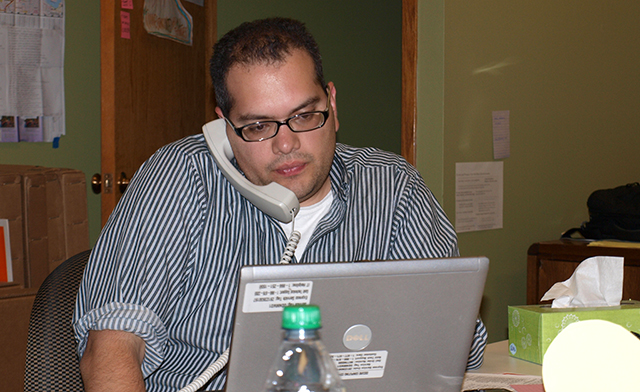 Micro-targeting is very expensive, but has advantages for campaigns that would get less of a bang for their buck paying to blanket the entire state with pricey TV ads when reaching certain pockets is more important. Downsides include concerns over citizen privacy and fears that the creation of yet another expensive campaign tool will only reinforce the big money’s influence over politics.

Several local firms specialize in targeting not just for political campaigns but for issue advocacy groups, businesses and others. This close to an election they are bound by clauses in their client contracts not to talk about the process publicly.

Minnesotans United’s leaders are not about to give away the fine points of their targeting strategy either, but it is worth noting that it’s a coalition that includes a number of member groups, such as political units and union locals, that maintain their own call lists.

The messages Ucles has urged this group of callers to practice are personal. People they can classify right off as firm “no” votes are asked if they would like information on volunteering, scored on a scale of one to five, with one being the highest level of support, and wished a good evening.

Those who are firm fives — who are certain they are voting “yes,” prefer no legal recognition of any kind for LGBT couples or think it’s not OK to be gay — are thanked politely for their time.

On the back of the paper script each caller is given an FAQ and suggestions for responding non-confrontationally to concerns about religion, the adequacy of civil unions and children.

Conversations can be complicated

Conversations with the two-through-fours, the “squishy middle,” are a lot more complicated than one might imagine. Narvaez’s first call hears him out, listens to him read the proposed amendment, loudly declares, “I cannot support that at all!” and slams down the phone.

Narvaez thinks the man meant he can’t support the amendment but he’s not sure. Ucles has him marked down as not home so that he will get another call. He will also call back those who sound receptive to make sure they feel personally invited to an upcoming rally that will be held Saturday, Sept. 1 at 1:30 p.m. at the Paul and Sheila Wellstone Center (aka the Neighborhood House) at 179 Robie Street in St. Paul.

It’s slow going. Most of the calls go unanswered and many of those that are aren’t picked up by the person the campaign is trying to reach. Weisinger somehow manages to sound authentically friendly and low-key despite what starts out as an uninterrupted blitz of hang-ups.

The vote-no forces are in the process of creating a number of demographically specific phone banks. Weisinger is calling with the Latinos tonight, but plans to continue with an African-American effort that’s still in formation. Other volunteer groups are reaching out to voters in different faiths and geographic areas.

Ucles’ first live call reaches a man whose first response is a testy, “Leave the constitution alone!” Ucles moves to the next conversational tier and asks whether he knows any gays or lesbians. The man has a lesbian niece, but declares in response to the next question that he would never attend her wedding.

“They can do whatever they want, I just want to be left alone,” the man snaps. “And I want the constitution left alone.”

Marked down as a vote of ‘no’

Ucles marks him down as a firm no vote. Asking him to examine the seeming contradictions in his views might turn him into a yes, so he’s not getting a return call. If the conversation had gone the other way, if the respondent had said he or she supported civil unions but not marriage, or was comfortable with same-sex marriage but hadn’t decided how to vote, the talk would have been different.

Callers are instructed to be good listeners. “Are you married?” they might ask. “What does marriage mean to you?” With a non-antagonistic conversation hopefully under way, the volunteer might then describe her desire to someday marry her same-sex partner or his hope that his gay son won’t lose the chance to have the same rights as his straight one.

Narvaez struggled a little with this one. He is a research associate with the Humphrey School of Public Affairs at the University of Minnesota and the first reasoning he articulates in Ucles’ dry runs is compelling — a California resident during Prop 8, he had friends and colleagues who weren’t eligible for the same legal and employment benefits — but there are two problems with it.

First, it’s too nuanced, and too long. But it also speaks to the arguments for legalizing same-sex marriage, which is not what this vote is about, Ucles reminds him. Gay marriage is already illegal under Minnesota law.

The issue on the ballot this November would foreclose any future conversation about changing that. Narvaez needs to speak to that — and from the heart.

He looks stricken. He’s passionate about this and doesn’t want to mess it up. Franco chimes in that she’s nervous, too. She’s worried that she will reach mostly second- and third-generation immigrants who will find her accent off-putting.

‘The point is to have the conversation’

The idea is simply to open a dialogue, Ucles reassures them. “Maybe it’s not you who convinces them,” he says. “Sometimes it’s a hit, and sometimes it’s a miss, but the point is to have the conversation.”

After the dialing was done, the volunteers talked to some 16 people, nine of them at enough length to consider a conversation. Six opposed the amendment, two supported it and one was undecided.

That undecided voter can expect another conversation. The software the campaign is using is proprietary, but it’s clear that after the last call is placed Ucles will have an even more targeted list of people to follow up with. A short list could be invaluable in reaching the hard-core undecideds who make up their minds during the three days before the election.

Perhaps a conversation about voter registration needs to happen before the one about gay marriage. And some people — most famously Barack Obama — “evolve” over the course of several conversations.

“Lo que cosecha, siembra,” Ucles reminds his compadres. You reap what you sow.

Correction: An earlier version of this article contained an incorrect title for Guillermo Narvaez.