During his long and controversial career, Sun Myung Moon used his cult-like Unification Church to amass a huge fortune for himself and his family.

Moon, who died earlier this month at the age of 92, was more than a charismatic cult leader. He also dabbled in international espionage through his links to the Korean Central Intelligence Agency and its covert activities in this country. Those links were the focus of an investigation conducted by Don Fraser during his final term as Minnesota’s 5th District congressman in the late 1970s.

The investigation implicated the Moonies, as they were known, and unleashed a furious personal assault on Fraser by Moon and his followers. The assault included a $30 million lawsuit, filed against the Fraser and his staff investigators, that was later dismissed.

But  Moon’s agents did more than file frivolous lawsuits. In 1978, they sent their followers into Minnesota to sabotage the 5th District congressman’s 1978 campaign for an open U.S. Senate seat. There were even some dirty tricks in play when a shadowy investigator with ties to the Moonies tried to embarrass Fraser by claiming that he had inappropriately manipulated his congressional staff payroll.

And then there were rumors about a mysterious fire at the Fraser’s D.C. home, just days after his narrow loss to Robert Short in the Senate primary election.

In his 1980 account of the Fraser Subcommittee investigation, “Gifts of Deceit,” Robert Boettcher wrote about the Moonies’ unrelenting efforts to intimidate Fraser in an effort to thwart his investigation. Boettcher, who served as the subcommittee’s staff director, reported that Fraser was the target of a “nationwide propaganda barrage.” 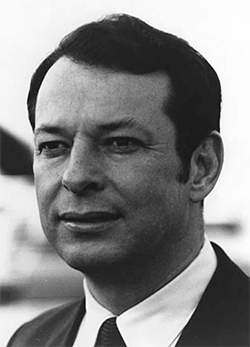 “Letters went out to thousands of lawyers, clergyman and politicians,” Boettcher recalled. “They even went after Fraser’s wife and children. His wife, Arvonne, was described as fanatical left-wing feminist whose job at the State Department put her in a conflict of interest with her husband in Congress. They tried to make something sinister out of Fraser’s daughter’s participation in an anti-Vietnam War demonstration at the University of Minnesota.”

While Fraser and Boettcher never had direct dealings with Moon,  they did have extensive contacts with two of his key operatives: Neil Salonen, who headed  the Unification Church in the United States, and Bo Hi Pak,  who ran a Washington, D.C., front group for Moon known as the Freedom Leadership Foundation.

In “Gifts of Deceit,” Boettcher wrote about a dramatic confrontation between Fraser and Pak at an April 11, 1978, congressional hearing where Pak called him “a tool of the devil.”

“You have nailed Reverend Moon’s name and the Unification Church to a cross. You have crucified us,” Pak shouted out to Fraser at one point during the hearing.

“Nonstop, he went on with the diatribe at accelerated speed. His voice became louder and louder,” Boettcher remembered. “He waved his arms vehemently. Near the breaking point, his voice trembled as he shouted with tears in his eyes: ‘You may get my scalp, Mr. Chairman, but never my heart and soul.My heart and soul belongs to God.”

Later that month, at another congressional hearing, Pak lashed out again at Fraser, this time calling him “a traitor, a second Benedict Arnold, and an  enemy of this nation and of all free nations.” 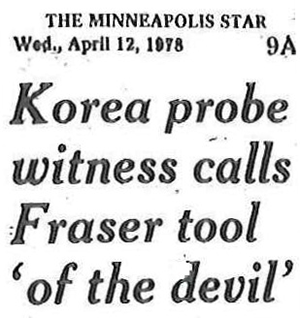 “Bo Hi Pak, as ever the quintessential Moonie, intended to serve as a shield for Moon,” Boettcher noted. “Fraser’s volumes of interviews … financial records and intelligence reports were highly damaging to Moon’s image. But he [Pak] must not allow Fraser to drag the Master into the hearing room as he had been. If necessary, he would be the sacrificial animal at Fraser’s pagan rite.”

“With so much evidence pointing to Moon, however, Fraser reluctantly concluded that he should be questioned,” Boettcher noted.

When Moon’s attorney rebuffed Fraser’s effort to get the Unification Church leader to cooperate voluntarily with the House subcommittee, the Minnesota congressman prepared to issue a subpoena to compel Moon to testify. But just as the subpoena was about to be issued, Moon abruptly fled the country, flying to London under a false name.

Fraser saw his own congressional career cut short with his loss in the 1978 DFL Senate primary. With that loss, his subcommittee’s investigation of the Unification Church and its link to the Korean CIA also came to an end.

Back in Korea, Moon exulted in Fraser’s defeat, claiming that God made Fraser lose the election because he “defied the will of heaven.”

“American Moonies had been indoctrinated to believe everything that happened to Fraser, was instructed by the Father. Now, the Father’s prophecy was being fulfilled. God’s enemy was being punished,” Boettcher observed with a note of irony.

Don Fraser left Washington and came back to Minneapolis, where he was elected mayor in 1979, serving in that office for the next 13 years. In 1982, Moon was tried and convicted of conspiracy and of filing a false income tax return. He was fined $15,000 and spent 13 months in a federal prison in Danbury Conn.