It was 1972, and George McGovern’s presidential campaign was coming through Minnesota.

Ronnie Brooks, the self-described “hopelessly naïve” campaign manager for McGovern in Minnesota, recalled that he checked into a place called the Airport Motel.

“I’m sure it’s not there anymore,” Brooks said. “It was such a cruddy place, even then, that I said to my husband, ‘Roger, maybe we should have him stay with us.’ ”

Politics seemed so different then, Brooks said, recalling the neighboring Democrat whose political career ended up intertwined with some of Minnesota’s most famous politicians.

McGovern, the former South Dakota senator who had been in failing health for months, died early Sunday at age 90 in Sioux Falls, S.D..

It was a political era that was more personal and certainly more frugal, especially for the McGovern campaign, which completely ran out of steam shortly after it was learned that Tom Eagleton, McGovern’s initial running mate, had undergone shock therapy for depression years earlier.

As it turned out, Eagleton was a double burden for McGovern. Prior to being selected as running mate, an unnamed senator had told journalist Robert Novak, “The people don’t know McGovern is for amnesty, abortion and pot.”

After Eagleton’s death in 2007, Novak revealed that the Missouri senator had been the source of the comment that was used against McGovern throughout the campaign of Richard Nixon. “He supports amnesty, abortion and acid,” Nixon supporters would say.

In retrospect, Brooks said it was those two things — Eagleton’s mental health issues and the “amnesty, abortion and acid’’ comment that doomed McGovern’s campaign. He ended up being clobbered by Nixon, winning only in the District of Columbia and Massachusetts. Dating to 1956, it was the only time Minnesota voters favored the GOP candidate.

“We were young, we were enthusiastic, especially before the Eagleton episode,” said Brooks of campaigning for McGovern across Minnesota. “He was someone we could believe. He was articulate, thoughtful and …” — she finished with a laugh — “… not at all charismatic.”

That stay at a dumpy airport motel represented the character of the man, Brooks said.

“He never was caught up in a sense of self-importance,’’ she said. 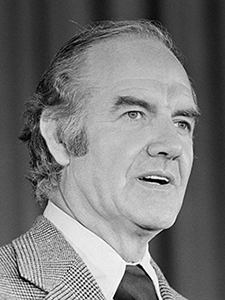 Library of CongressGeorge McGovern in 1972

But oh, how controversial McGovern, a World War II bomber pilot, was.

John Milton, a former state legislator and author of a book on powerful Minnesota legislator Nick Coleman (“For the Good of the Order”), recalled how many DFLers ran away from — not with — McGovern in 1972.

At the time, Milton said, the Republican Party likely was more progressive on such social issues as gay rights and abortion, than the DFL. McGovern’s progressive social views were not viewed kindly by many DFL legislative candidates.

An example of the split created by McGovern: Typically, political parties mail out “sample ballots” to supporters. Those ballots include races from president down to the lowest level political offices.

“A lot of people did not want to be on the sample ballot” with McGovern, Milton recalled.

Milton, a McGovern supporter, opted to use the sample ballot and won his state Senate race in a Republican-leaning district in Ramsey County.

McGovern’s career was tied closely to Minnesota — and the mighty Democratic politicians of the time. He took on Hubert Humphrey, Eugene McCarthy, and later, Walter Mondale — and had a mixed record against those former Minnesota senators.

McGovern vs. Humphrey vs. McCarthy

Just before the 1968 Democratic National Convention in Chicago, McGovern stepped into the national spotlight, offering himself as a substitute for Robert Kennedy, who had been assassinated in June.

That decision pitted McGovern against Humphrey, the choice of the party machine, and McCarthy, the anti-war candidate.

Why did he take on McCarthy and risk splitting the anti-war movement?

“Gene doesn’t really want to be president,” McGovern said at the time. “I do.”

In a blood-spattered, angry convention, Humphrey did end up with the nomination, with McCarthy finishing second in the delegate count and McGovern third.

Humphrey went on to lose a close race to Nixon. McCarthy became more quixotic than ever. McGovern rose in prominence on two fronts.

First, he headed what was known as the “McGovern commission,’’ which created rules that dramatically changed the process of delegate selection for future party conventions. The new rules dramatically cut the power of the old insiders, opening the convention floor to more women and minorities.

Second, he became ever more outspoken against the Vietnam War.

In 1970, McGovern delivered a speech on the Senate floor that flabbergasted his colleagues and firmly put McGovern at the head of the party’s doves.

“Every senator in this chamber is partially responsible for sending 50,000 young Americans to an early grave,” McGovern said in that stunning speech. “This chamber reeks of blood.”

As the race for the Democratic 1972 presidential nomination unfolded, Maine Sen. Edmund Muskie — Humphrey’s running mate — was the early frontrunner. When Muskie faltered — remember the tears in New Hampshire? — Humphrey seemed to many to be the new front runner. He started off with a flourish, in fact, winning a primary — his first-ever primary victory — in Pennsylvania.

But Humphrey faltered, McGovern prevailed and the Democratic Party was deeply divided.

Of course, Nixon’s paranoia — even against a candidate as weakened as McGovern was — led to Watergate and his own fall, following his huge triumph.

McGovern lost his Senate seat in 1980 but then made an effort to get back into presidential politics in 1984.  Few took him as a viable candidate, though he received the label as “the conscience of the Democratic Party.”

After garnering little support in early primaries, he dropped out of the race and worked hard for Walter Mondale.  That race, of course, went no better for Mondale than McGovern’s own race had gone.

But the McGovern-Mondale relationship did lead to one of those little stories that still makes Mondale chuckle. 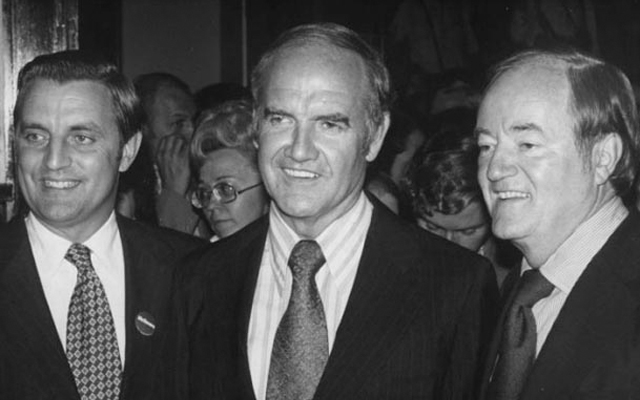 Mondale recalled a conversation that went something like this:

McGovern: “I need to speak at the convention.”

Mondale: “Sure, George, we’ll make time for you.”

McGovern: “What I have to say is very important. I need to be on in prime time.”

Mondale: “We’ll see what we can do, George.”

Mondale said that 10 prime-time minutes were set aside for McGovern.

But McGovern was just warming up as he hit the 10-minute mark and kept on talking through 15 minutes. There was no end in sight.

Convention managers were trying to figure out how they were going to get McGovern off stage.

Later, Mondale said he learned how they moved the old South Dakotan along.

The speaking platform at the convention could be moved up and down, depending on the height of the speaker, by pushing buttons off stage.

Convention manager Mike Berman went to the buttons and suddenly McGovern was moving, ever so slowly, up, then down.

“It was so slow that I didn’t even notice it,” Mondale said.

But apparently McGovern did, and he found a way to end his speech and get off stage.