At about 1:30 this morning Richard Carlbom, head of the campaign to defeat a proposed constitutional amendment banning same-sex marriage in Minnesota, gathered his troops in a private room at St. Paul’s River Centre. At 2 a.m. the group would have to vacate the two ballrooms across the hall where its election-night event had been going on for hours.

Throngs of supporters were waiting patiently for word, but there were glitches with voting machines in Minneapolis and unexplained delays in the posting of results by elections officials. About 88 percent of votes had been tabulated, but the race seemed too close to call. We’re going to go out there and say we don’t see how the amendment can pass and wish everyone good night, Carlbom told his troops, someone in the room later reported.

At 1:45 he took to the stage and asked campaign staff to join him. While they were crowding onto the risers, someone waved a Smartphone under Carlbom’s nose. The Associated Press had called the race in favor of Minnesotans United for All Families’ favor. There was a barely perceptible pause.

“Tonight, Minnesota proved that love is bigger than government,” he said, beaming. “Minnesota has become the first state in the nation to defeat this type of amendment.”

For the next few minutes, Carlbom had a hard time completing a sentence over the roar of the crowd. “We did this together,” he told them when the din died down. “This conversation does not end tonight. It’s only just beginning.”

For hours, the throngs of supporters had been treated to a rollercoaster ride of results. At first they cheered and danced. They tweeted and Facebooked and bought still more orange and blue “Vote No” T-shirts. And as news of the legalization of same-sex marriage in referenda in Maine and Maryland flashed across the Jumbo-tron, and likely Washington, they cheered all the harder. After 31 straight losses at the ballot box, same-sex marriage had finally carried the day somewhere.

But as the evening wore on, and the hefty early lead amendment opponents enjoyed narrowed, at first slowly, and then in chunks, people started to wonder: Why was this race taking so long to call? Midnight came and went with many sitting cross-legged on the floor, wondering whether there would be a recount and whether Minneapolis returns — still completely unreported at that point — would keep the yes vote below the 50 percent needed to pass the ban.

But they didn’t leave. Many were among the 27,000 who volunteered for the campaign. Many were gays and lesbians who hadn’t dared hope. It seemed entirely possible that with few votes to be counted and a dead heat, the room would defy clearing.

What happened? By all appearances, in the few minutes Carlbom spent convincing his troops that victory would taste just as sweet Wednesday and making his way across the ballroom, the 119 Minneapolis precincts that had gone uncounted were tabulated and instantaneously tweeted.

The state Legislature voted in May 2011 to put the proposed amendment on the ballot, but the vote-no campaign’s genesis occurred in 2009, when Maine became the 31st state where voters rejected same-sex marriage. It was clear it was time to “hit the reset button,” Thalia Zepatos, director of public engagement for the national same-sex marriage advocacy group Freedom to Marry, said Tuesday as the first votes began rolling in.

Immediately after the election, Freedom to Marry and Third Way, a Washington, D.C.-based think tank focused on the political center, commissioned surveys in Maine and in Washington, where voters had passed an expansion of that state’s domestic partnership law.

It was clear how gay-marriage foes were consistently winning over the middle but unclear why, with overall support for gay rights swelling, the many different campaigns to combat those messages failed just as consistently. The goal: Identify the disconnect.

For starters, it turned out that if surveyors varied the questions asked of members of the so-called squishy middle — voters who were movable became much larger than the 10 percent-15 percent it was typically assumed to be. Given a range of possible positions, almost half of voters supported some form of legal recognition for same-sex couples but not marriage.

Only a slender majority agreed that “marriage is a basic human right that should not be denied to gay people” and that “not allowing gay people to marry is discrimination.” 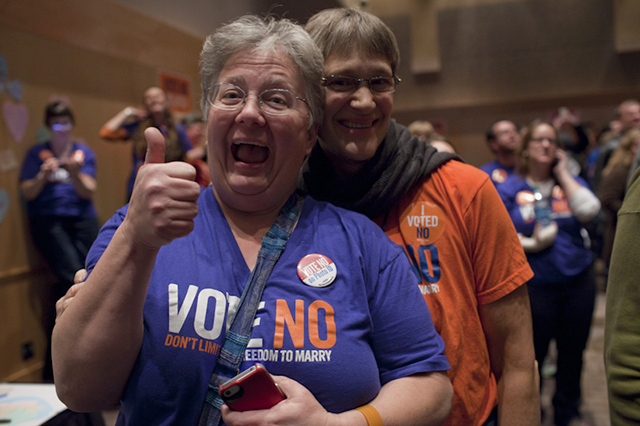 MinnPost photo by Terry GydeseBetty Tisel and her partner, Sarah Farley, celebrate the defeat of the ballot measure on election night.

According to more protracted research that followed, members of that much larger middle struggled with conflicting internal values — and little idea why gays and lesbians wanted the ability to marry.

“They are struggling to understand the motivations of gay couples who wish to marry,” a Third Way report released last fall explained. “Are they seeking to change the institution of marriage or join it? Are they marrying for similar reasons as other couples or for different reasons — like benefits, rights, or to make a political statement?”

‘What does marriage mean to you?’

By leaning heavily on the issue of rights and equality in their messaging, gay-rights groups might have inadvertently hit a nerve. A national poll was conducted in which participants were asked the open-ended question, “What does marriage mean to you?” Common answers included “commitment,” “responsibility,” “fidelity” and “a big step.”

In another poll in Maine, the description of marriage that participants most frequently cited was “a lifetime com­mitment between two people through good times and bad.” Other queries suggested that many feared gay couples who wanted to get married to change the institution of marriage.

Reframed as a question of commitment, the numbers reversed. Sixty percent of respondents in the poll agreed that allowing gay couples to marry would “help committed couples take care of each other and their families.” Indeed, by the end of the questions in some of the polls, voters said the discussion with the surveyor about the value of commitment had led them to change their mind.

So why didn’t the ads in Maine’s 2009 election showing same-sex couples talking about their relationships move the needle? The data also showed the struggling middle was looking for reassurance that it was OK to change one’s mind on the issue. Gays and lesbians talking about wanting marriage didn’t reach enough straight people in the middle.

“Using a messenger who could describe changing his own opinion on why gay couples want to marry modeled this positive evolution on the very issue that is most crucial to gaining support,” Third Way concluded. “It reinforced soft marriage supporters by mirroring their own evolution and gave those in the middle permission to recon­sider their own beliefs about gay couples’ motivations for wanting to marry.”

Another key ingredient in that evolution: Reassurance that religious freedom would not be affected. One study showed support jump­ing 14 points in a single poll with the inclusion of a religious-liberty assurance. And guarantees that religious leaders and churches would be protected were a crucial factor in the New York legislature’s passage of a gay marriage law.

The research formed the backbone of the strategies used by gay-rights advocates this year here, in Maine and in Washington. (Maryland adopted a similar strategy, adjusted to account for its large African-American population.)

In addition to changing the messaging, the campaigns also poured energy into finding ways to stage personal conversations, in the hope that much as the pollsters found people’s attitudes changed as they discussed their values about marriage, undecided voters might begin to resolve their concerns. An army of volunteers was trained to talk about the issue and enlisted to stage house parties and engage in demographically tailored phone-banking.

During the last seven days, Minnesotans United staff and volunteers called more than 900,000 likely voters. They knocked on more than 400,000 doors. Crazy as the strategy might have appeared a year ago, they held countless conversations about marriage.

In the end, the room was not clear by 2:01, but no one seemed to care. It might literally not have until the final moments, but technology, social media and the master plan lined up and enabled them to have the campaign’s final conversation together.

Minnesotans on marriage: ‘Love is bigger than government’