The issue of same-sex marriage has become a story of boomerang politics in Minnesota this year.

It was, ironically, Republicans who made same-sex marriage a headline issue in this session. It was their push for a constitutional amendment that would have restricted marriage to a man and a woman which boomeranged into putting same-sex marriage on a fast track.

Without that proposed amendment, which was defeated last November, many of those now leading the fight to legalize same-sex marriage say they believe the issue would have been put off, as it has been for years, to some foggy point in the future.

“We didn’t ask to be thrust into this conversation,’’ said Richard Carlbom, campaign manager for Minnesotans United for Marriage, which was the broad coalition that was formed to fight the amendment and is pushing for same-sex marriage now.

But the just when it appeared that Minnesota was on the cusp of legalizing same-sex marriage that boomerang may have swooped again.

This was always going to be a tight, controversial vote.  Does the poll stop momentum that seemed to be building for legalization of same-sex marriage?

Rep. Steve Simon, a major supporter of legalization, says the bill will move forward. It is to go to the Civil Law committee, which is chaired by Rep. John Lesch, DFL-St. Paul, next week. That committee, friendly to same-sex marriage, is the only committee which will hear the bill before it goes to the House floor.

Simon admits he was surprised and disappointed by the numbers in the Minnesota Poll. But, like all pols on the negative side of poll numbers, he believes there are reasons for the results.

“It’s all in the way you ask the polling question,’’ Simon said.

He said he believes the key for most Minnesotans surrounds religious issues.

When they learn that the Minnesota law that would allow same-sex marriage “aggressively protects religions’’ from being forced to perform same-sex marriages, a solid majority of Minnesotans will be comfortable with the law.

There still are arms to be twisted, expecially in the House where most expect the margin will be razor thin either for or against.

But the belief is that when the bill does hit the House floor, it will mean that leadership knows there’s enough votes to pass the marriage bill and that by Aug. 1, there will be pictures in the media of same-sex couples being married.

That all of this is happening so quickly surprises virtually everybody, including those who fought so hard to defeat the marriage amendment.

Even in the days following the victory over the marriage amendment, there was careful discussion among Minnesotans United leaders and other groups as to whether it was too soon to push for marriage.

Within a week of their triumph, anti-amendment leaders were talking about “if’’ the time was right to go for same-sex marriage, Carlbom said. Within two weeks, there was a strong sentiment to make the push “now.’’

Certainly, most state political leaders were cautious at the beginning of the session. Recall, Gov. Mark Dayton, House Speaker Paul Thissen and Senate majority leader Tom Bakk all were using such phrases as “hold a conversation with Minnesotans” when questions of same-sex marriage came up.  This session, all three said, should be dedicated to fixing the budget.

Dayton has since become much more an advocate of legalizing same-sex marriage and there’s little doubt that Thissen, in his soul, is supportive of the cause.

The concern remains that same-sex marriage steals the headlines from the budget issues that DFLers continually say should be the No. 1 priority of the session.

But it could easily be argued that same-sex marriage is the bigger historical issue. There always will be budget issues to resolve.

And straights and gays alike whose groundswell of interest propelled the DFL to victories in both legislative chambers are watching. A tepid response from party leaders could pose more of a problem in the next election if those same voters are not energized to stay involved.

In a further irony, GOP members who vote yes may help to broaden the base for a party that badly needs to attract greater numbers of gays, women and immigrants. As popular opinion nationwide turns in favor of same-sex marriage rights, the risk of turning away from the religious right on this issue lessens.

Finally, much as Minnesotans United’s carefully crafted anti-amendment messages gave ambivalent voters permission to change their mind about the issue and to frame it as a question about the importance of family. These themes are readily apparent in statements made by former state auditor Pat Anderson, Sen. Branden Petersen, R-Andover, and other GOPers in favor of Senate File 925. 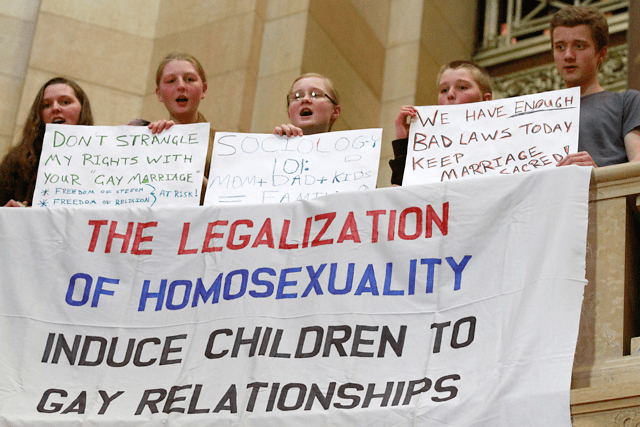 Once it’s clear there are enough votes to pass the bill, its arrival on the House and Senate floors could very well deliver more decisive majorities as lawmakers get caught up in the anticipated emotional groundswell.

For example, a conservative DFLer, Charles Brown, an auctioneer from Appleton, spoke passionately of why, after much thought, he would support the civil rights bill.

“He stood on the floor,’’ recalled Clark, “and told us how when he was elected he’d promised his mother that ‘I will always try to do the right thing.’ Then, he turned to the gallery and said he was supporting the bill and said “it is the right thing.’’

On the Senate side, it was Dean Johnson, then Republican minority leader, who gave the most compelling speech of the day.

Johnson, who later would become a DFLer, admitted he was afraid of expanding civil rights to GLBTers.

Clark, who was first elected in 1980 and was among the first openly lesbian elected officials anywhere in the country, believes she’ll see the same sort of from-the-heart passion from legislators this session.

But she also said that this issue came forward now because of the amendment, though in the immediate wake of the November victory over the amendment she wasn’t sure that this was the time to push forward.

“I don’t know the exact timing of when I thought now was the time,’’ she said. “I just knew that Minnesotans had spoken.’’

“We’re very carefully listening to the needs of legislators,’’ she said. “We’re carefully explaining that this is a civil marriage bill with exceptions for religions.  We’ve spelled that out carefully. There can’t be a doubt about that. Your church, your religion, can’t be required to marry anyone.’’

Gregory Angelo is national director of Log Cabin Republicans, an organization devoted to the rights of GLBTers.  Angelo repeatedly points out that equal-marriage protection means “civil marriage.’’ It doesn’t require churches to marry individuals if that marriage would violate the religious beliefs of a church.

“Some churches would marry, others would not,’’ he said.

There is no doubt in Angelo’s mind that it was the Republican push to restrict, in the state’s constitution, marriage that has led to the pushback. He also believes that the amendment was filled with faulty “political calculus.’’

“The amendment was an effort to apply a Karl Rove strategy from 2004 to 2012,’’ Angelo said.  “They thought the amendment would activate the base and put Minnesota in play in the presidential race. It turned out that just the opposite happened.’’

That story played out across the country,  Angelo said. He said that in 2008, nearly a third of the GLBT vote went to Republican candidate John McCain. Last fall, that number fell to 25 percent. The cause: The hard turn right on social issues by GOP presidential candidates seeking the nomination.

“It was a real turnoff,’’ Angelo said. “Republicans seemed like a lost cause.’’

He believes that the GOP learned a painful lesson. He also said that his organization is working on Minnesota politicians to make them understand there’s “no gain’’ in opposing such “conservative values as love, commitment and marriage.’’

It’s unclear whether Log Cabin Republicans have any impact on any pols in Minnesota. On the surface, at least, that organization seemed to be a greater factor two or three decades ago than now.

But there are other political measurements that keep coming out.

This week, Third Way, an organization which claims to represent “the vital center’’ of political thought, released a study showing that, nationally,  legislators who support equal marriage rights likely haven’t be tossed out of office.  According to the study, 97 percent of those who voted for marriage bills were re-elected. Of the five who were not re-elected, two were under investigation for corruption. The study also showed that 85 per cent of Republicans who supported equal marriage bills since 2010 have held onto their seats.

Sen. John Marty thinks most pols are over-thinking this whole issue. Immediately after the marriage amendment was defeated, Marty made it clear he was going to again introduce legislation that would allow same-sex marriage. Ultimately, though, he deferred to Sen. Scott Dibble, DFL-Minneapolis, an openly gay man who worked tirelessly to defeat the amendment.

Marty recently recalled his final conversation with the late Sen. Allan Spear, among the first in the nation to announce that he was gay and the main force behind the expansion of civil rights to GLBTers in 1993.

“One of my last conversations with Allan was about this (marriage),’’ Marty said. “It was the year he died (2008). He said ‘We’re not going to get marriage equality.’ He thought we should fight for civil unions. I said, ‘separate is not equal and you know it.’ I think back to that time. Things have changed that much, that fast.’’

By Beth Hawkins and Doug Grow