This article was supervised by MinnPost journalist Sharon Schmickle, produced in partnership with students at the University of Minnesota School of Journalism and Mass Communication, and is one in a series of occasional articles funded by a grant from the Northwest Area Foundation.

When a St. Paul homeowner introduced herself at a community foreclosure meeting, she did not mince words.

“I’m Sheronda Orridge, and I’m a sharecropper at 525 Sherburne,” she told the 350 community members in 2011. That’s what it felt like to her, she said, paying her mortgage bills and yet seeing that her loan balance was not shrinking.

Orridge was one of many Minnesotans of color who were dealt subprime or otherwise predatory home loans at higher rates than most white Minnesotans paid in the years leading up to the Great Recession. Banks profited by pushing African American and Hispanic families into such high-cost mortgages. Then, when the housing bubble burst, those borrowers lost their homes at disproportionately high rates. Around the Twin Cities, many still are fighting foreclosure.

Now, from Orridge’s Frogtown neighborhood to high-level offices in the Obama administration, a battle is underway to end such discriminatory lending.

One of the ironies of lending in the United States is that those who are least able to pay are likely to be charged the most. Banks try to protect themselves against losses by charging higher rates for higher-risk clients.

That’s not the whole story, though.

While the higher rate of poverty among minorities partially explains the correlation between race and high-cost lending, numerous reports and studies over the years have shown that, even while controlling for income, minorities in the Twin Cities have been more likely to pay more for mortgages: 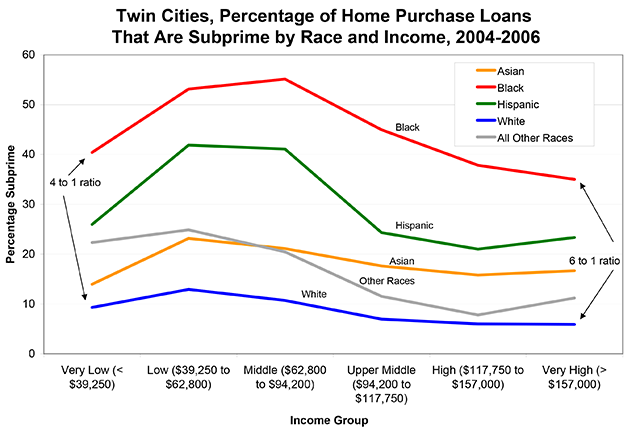 Institute on Metropolitan OpportunityIncome is not the only factor that determines a borrowers risk, but dramatic racial disparities shown in this chart suggest that race does influence loan terms. Due in part to lending patterns such as these, minority borrowers across the Twin Cities lost their homes at disproportionately high rates when the housing bubble burst.

Allegations of systematic discrimination led the U.S. Justice Department’s Civil Rights Division to sue Wells Fargo, the nation’s largest home-mortgage lender. Federal authorities alleged that between 2004 and 2009 Wells Fargo, working through independent brokers, charged higher rates and fees to more than 30,000 African American and Hispanic borrowers than to their white counterparts with the same credit risk.

Wells Fargo settled the case last July, pledging to pay $175 million but denying the allegations. In a statement announcing the settlement, Wells Fargo said it would stop dealing through independent brokers.

The Twin Cities was not singled out in those nationwide cases. But lenders here have engaged in the same type of discrimination, said Myron Orfield, who analyzes the mortgage market as director of the University of Minnesota’s Institute on Metropolitan Opportunity.

“It’s worse in Minneapolis,” Orfield said. “We have the biggest disparities in lending between black and white.”

While Wells Fargo is Minnesota’s leading mortgage lender, the Twin Cities was not one of the eight metropolitan areas investigated by the Justice Department.

Wells Fargo’s Minnesota spokeswoman, Peggy Gunn, responded to questions about the case via email: “We do not tolerate discrimination against, or unfair treatment of, any consumer. Our loan decisions are based on credit and transaction risk. Race is not a factor.”

As part of the settlement, Wells Fargo also conducted an internal review of subprime loans made to African Americans and Hispanics through the bank’s own agents and identified an additional 3,990 borrowers “who might have qualified for prime loans,” Gunn said. A settlement administrator is expected to begin compensating borrowers later this year, she said.

Meanwhile, as the nation’s attention turns to other issues, the pain continues for borrowers, and radiates through their families and communities. High-cost mortgages often force borrowers to spend more just to keep up with the interest rates and leave them less able to cover basic living expenses and contribute to the greater economy.

“The effects of the crisis are nowhere near over,” said Tom Goldstein, a lawyer who worked with the St. Paul Fair Lending Coalition.

The crisis persisted for years at the home where Orridge has lived since 1997. She ran A Mother’s Touch Daycare out of her basement.

In 2005, with an eye toward buying a building and relocating her daycare, Orridge decided to refinance.

Loan officers at World Savings Bank encouraged her to refinance with a “pick-a-payment” loan, which would offer her four repayment options, she said. Under the minimum payment plan, she was told, she could pay less than $500 a month on her $132,000 loan for the first year. What was not clear to her, though, was that this would eventually drive her deeper into the hole because her loan payments did not cover the full interest accrued.

Orridge decided to take the lowest payment option, thinking she would refinance before the payments, which were set to double over the life of the loan, became too high to handle. What she hadn’t counted on was that the value of her home, like others nationwide, would plummet.

Unable to refinance, Orridge was stuck with payments that were increasing for a house that was losing value.

“At this point, I’m just paying just to stay in my house; I’m not paying on anything else,” she said.

Orridge’s problem was not unique.

She was automatically entered as an unnamed plaintiff in a class action lawsuit against Wachovia, which had acquired World Savings, alleging deceptive marketing of “pick-a-payment” loans.

Customers who were offered the low monthly payments were not clearly told that these payments would fail to even keep up with the costs of their interest rates, which would be added to the principal amount of the mortgage and accrue more interest in a process known as negative amortization, according to the lawsuit.

Wachovia denied the allegations, but settled to avoid protracted litigation, according to the court documents.

When the settlement came through in 2011, Orridge received a check for less than $200.

While a number of factors, including poverty, neighborhood segregation and language and cultural barriers, all contribute to the disparate rates of subprime lending between whites and minorities, sometimes the reason is as simple as discrimination.

Even when minorities in higher socioeconomic brackets applied for loans to prime lenders, they were much more likely to be denied, according to the report by the Institute on Metropolitan Opportunity.

Tess Rice, general counsel at the Minnesota Bankers Association, cautioned against making comparisons based only on race and income. The two most important factors in determining an individual’s interest rate are credit score and debt-to-income ratio, Rice said.

“You could make $150,000 but have enough debt that that’s not sufficient income to cover a new loan,” Rice said. 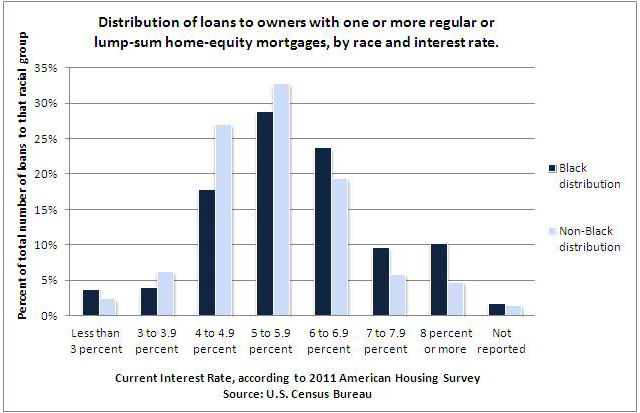 Sarah Rose MillerData from the 2011 American Housing Survey conducted by the U.S. Census Bureau shows that black homeowners are still saddled with higher interest rates to a significantly greater degree than non-black homeowners.

Though race and lending data that takes into account credit scores is hard to come by, there is anecdotal evidence.

“We’re finding people with equal [credit] scores and equal credit history — some are going mainstream . . . and people of color are more apt to get mapped to the subprime,” said Nicholas Jaeger, the director of the Wealth Accumulation Intersection at the Minneapolis Urban League.

In 2008, 40 years after the Fair Housing Act made it illegal to discriminate in housing against someone on the basis of race, color or country of origin, a coalition of civil rights and fair housing groups came together to assess the state of fair housing.

The report by the National Commission on Fair Housing and Equal Opportunity concluded that despite strong legislation, discrimination in lending and housing markets continues “to produce extreme levels of residential segregation that result in significant disparities between minority and non-minority households, in access to good jobs, quality education, homeownership attainment and asset accumulation.”

The U.S. Department of Housing and Urban Development (HUD) has repeatedly studied discrimination in housing and repeatedly found evidence of multiple forms of racial discrimination in mortgage lending. One recent HUD report, “Risk or Race,” studied the connection between minorities and subprime loans and concluded that “the inclusion of neighborhood credit measures did not explain away the troubling finding that race and ethnicity remain an important determinant of the allocation of mortgage credit.”

With family income unsteady, Kathryne and Miguel Chiqui of Minneapolis were forced to dip into their savings in order to meet payments on the double mortgage for the duplex that Miguel and his brother, natives of Ecuador, had purchased in 2005. The Chiquis depleted their entire $20,000 savings in little more than a year, and eventually had to sell the house at a loss to avoid foreclosure.

“It just made my stomach drop,” Kathryne Chiqui said. “I mean there were times when I just wanted to cry because it’s like watching your dream going down the drain.”

The loss of equity potentially reaches far beyond the Chiqui family to their community and ultimately the state’s economy.

Minnesota’s population is 87 percent white, making it less diverse than most other states. But the state’s minority communities are growing at a much faster rate than the white population, according to the U.S. Census.

To leave a good share of Minnesota’s minority residents lost in a veritable credit desert is to weaken the economic future for the state as a whole.

“It’s not only one family that’s affected by this. There are secondary casualties,” said Pablo Tapia of La Asemblea de Derechos Civiles, a statewide community organizing group for Latino immigrants. Discriminatory lending, said Tapia, “promotes homelessness and destroys the neighborhoods…. This is less money for the cities that are being impacted by it because there are no taxes coming from property taxes.”

Further, properties near foreclosures also lose value, according to a report by the Center for Responsible Lending. This so-called spillover effect, based on foreclosures between 2007 and 2011, was a loss in value of $1.95 trillion nationwide. More than one-half of that was in minority neighborhoods, the report said.

Looking to the future

After three years of trying to negotiate a modification to her loan, Orridge finally succeeded. Wells Fargo, which took ownership of her loan when it acquired Wachovia in 2008, gave her a modification in accordance with the government Home Affordable Modification Program. Her new loan has a current interest rate of 2.66 percent. After six years, the rate is set to rise to 3.78 percent for the duration of the loan. On top of that, Wells Fargo agreed to forgive $44,000 of the loan principal over a period of four years.

Orridge can count herself among the lucky few.

“The number of people that get in that situation…who actually get a modification that enables that to stay in their property, I’ll bet it’s not one in 10. I’ll bet it’s one in 20,” said Goldstein, the fair-housing lawyer. He helped Orridge negotiate with Wells Fargo.

In May, Orridge launched a series of workshops in which others affected by foreclosure learned how to express their situations through performance art. The workshops were hosted by Arts Responding to Foreclosure, an organization Orridge helped found.

“I’m still fighting,” Orridge said. “Even though I got my modification…as the song said, if one of us is chained, none of us are free.”

Christopher Heskett and Kelsey Shirriff contributed to this article.